Viking Serenade. The work will take place at Southwest's San Diego facility, also the company's corporate headquarters, and is scheduled to begin January 27, 1991, and continue for 13 weeks, ending April 29, 1991.

According to Herb Engel, Southwest's executive vice president and chief operating officer, "The award of this contract represents the largest cruise ship conversion to be undertaken in the U.S.

and has significant international implications for Southwest Marine and the ship repair industry. In the past, most commercial repair work on tbis scope has been conducted in Europe. This fact further emphasizes the importance of the award for Southwest Marine and serves to solidify Southwest's commitment to expand into the commercial repair marketplace. We are very pleased and proud to be entering into this partnership, along with the support of Wells Fargo Bank, and are looking forward to playing a key role in the further success of Royal Caribbean Cruise Line's marketing efforts targeting Baja, Mexico. Our entire team will work diligently to assure the timeliness and quality of the repair work in order to enable the Viking Serenade to make her inaugural cruise from Los Angeles to Catalina Island and then on to Ensenada, Mexico." This $75-million refurbishment project was granted to Southwest Marine based on a track record of quality work, delivered on time, at a competitive price.

The entire work package to be performed on the ship includes the following: addition of 260 cabins; addition of a lounge on ship's funnel stack; creation of a new dining room, and expansion and upgrading of the existing one; addition of an indoor/outdoor cafe; expansion of the casino; new piano bar; new gift shop area; construction of a conference center; new switchboard, telephone and public address system; new air conditioning and heating systems; overhaul of fire systems; and construction of new offices, hospital facilities and galleys.

For free literature on the facilities and capabilities of Southwest Marine, Circle 55 on Reader Service Card 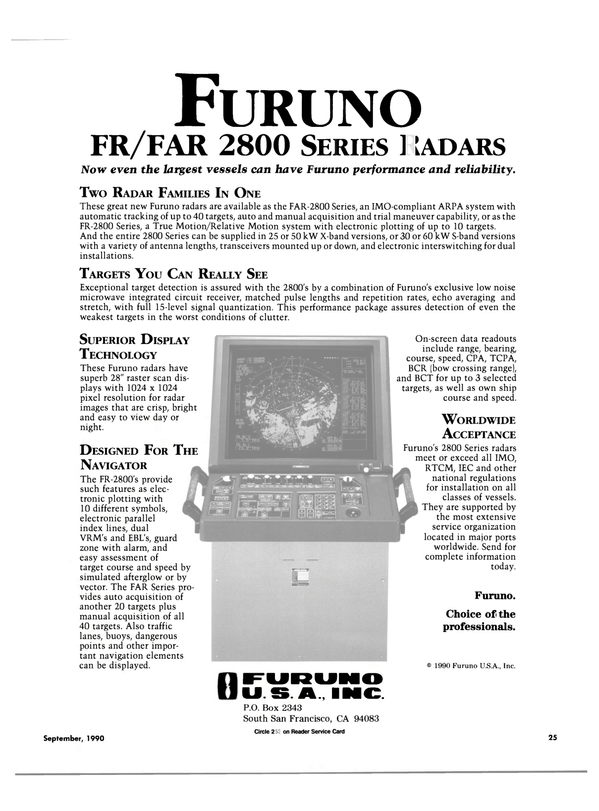