The American Waterways Operators, the national trade association of the inland and coastal tug and barge industry, will hold its annual meeting and spring convention on April 4-5, 1991, at the Ritz-Carlton Hotel in Washington, D.C. All AWO members, including directors, designated representatives, alternates, committee members, directors emeritus, and other individuals from AWO member companies are encouraged to attend the spring convention. Qualified representatives of tug and barge industry companies or shipyards who are interested in AWO membership may attend the meeting by special arrangement by contacting AWO headquarters.

Founded in 1944, AWO represents an industry that operates a fleet of over 7,500 coastal tugs and inland river towboats, and over 30,000 barges. AWO's member companies, more than 300 in all, are located along the banks of all major U.S. waterways, and on the shores of the Atlantic, Pacific and Gulf Coasts.

Several hundred key towboat and barge industry leaders are expected to attend the spring convention, which will provide an excellent opportunity for members to be briefed on pertinent issues confronting the association and the industry, and to more deeply involve themselves in the ongoing efforts of AWO. Along with the usual convention activities, there are several other events planned.

Of particular interest, the American Waterways Shipyards Conference will hold a seminar on "Environmental Compliance in the 90s— For Small and Medium-Sized Shipyards," Wednesday, April 3, from 1- 5 p.m., the afternoon prior to the convention. The seminar will provide registrants with an overview of Federal environmental regulations and will focus on such issues as the Clean Air Act, pending legislation in the 102nd Congress, understanding liabilities and penalties, storm water drainage, hazardous waste disposal, and enforcement of EPA hazardous waste requirements, among other issues.

Registration for this seminar is separate from the convention.

On Thursday, April 4, the following AWO committees and conferences will meet: Legislative, Regulatory, Health, Safety and Training, Public Affairs, and AWSC. The annual meeting, featuring the election of association officers, will take place from 5-6 p.m., followed by a reception from 6-7:30 p.m.

On Friday, April 5, 1991, the day gets underway with a breakfast meeting at 7:30 a.m. with guest speaker Robert M. Teeter, president of Coldwater Corporation, a consulting and research firm specializing in public opinion analysis and public affairs. Mr. Teeter served as senior adviser to the Bush For President campaign, where he developed and coordinated research, policy development, speech writing and advertising. Following the campaign, Mr. Teeter served as Co-Director for the Office of the President-Elect. He continues to work with President Bush and senior members of his administration.

The board meeting begins at 8:30 a.m. on Friday, April 5, with a discussion of key industry issues and association initiatives including the 1991 membership development program, an update on working groups involved in developing positions on key operational issues, environmental initiatives, a briefing on the Inland Waterways Users Board, and other matters. This meeting also marks the first full meeting with AWO's newest conference, the Towboat & Harbor Carriers Conference. 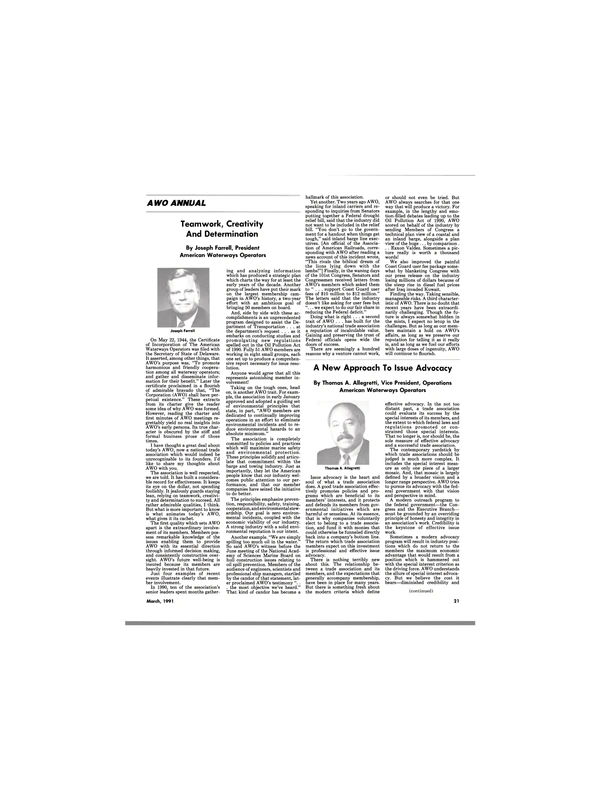