Effects On The U.S. Fishing Industry By The Anti-Reflagging Act Of 1987

Act Likely To Eliminate All Foreign Rebuilding Of U.S. Fishing Vessels Unregulated fishing and concern for depletion of fish stocks relied upon by coastal fishermen across the nation resulted in attempts to ensure control of the U.S.

fishing industry by Americans (i.e., Americanize the industry) as early as 1971. These Americanization efforts continued under the Magnuson Fishery Conservation and Management Act, which was passed in 1976. The Magnuson Act established exclusive U.S. management of fisheries out to 200 miles off our shores and gave priority to U.S.

fishermen and vessels for receiving fish quotas within the 200-mile limit.

Although the Magnuson Act led to increasing American control of our fishing industry through U.S. fishery management, several concerns developed among fishermen, shipbuilders, and others over some remaining barriers to the Americanization process. One concern was that the existing American control requirements for licensing a corporate- owned vessel under U.S. flag were minimal. These requirements allowed, for example, a company's stock to be totally owned by foreigners.

A second concern was that foreign owners could merely reflag their foreign-built fish-processing vessels as "vessels of the United States" and operate within the U.S. fishery, thus gaining first priority to process fish caught by U.S. fishing vessels.

Third, although before the act any vessels catching fish had to be built in the United States, these vessels retained their U.S.-built status and resulting fish-catching privileges even if they were later substantially rebuilt abroad so that they were essentially new vessels. Fishermen and others told us that many owners were rebuilding vessels abroad because doing so was less costly than rebuilding in the United States.

To address these concerns, the Anti-Reflagging Act was signed into law on January 11, 1988. Its provisions include the following: • It established more stringent American control requirements for corporations licensing vessels under the U.S. flag by requiring that the controlling interest in the vessel, as measured by a majority of voting stock, be owned by U.S. citizens.

In assessing if a vessel is in fact controlled by Americans, it also required that a variety of factors be considered from the Shipping Act of 1916 that could lead to foreign control, such as the existence of foreign financing.

• It prohibited owners from participating in the U.S. fishing industry with vessels built abroad.

The act also contained several grandfather clauses to protect the financial interests of owners who had become involved in U.S. fisheries under the previous conditions of law. For example, the granfather clauses allowed an owner, if certain conditions were met, to operate fishprocessing vessels used in the fisheries prior to the act without regard to where the vessels were built or to the new stock ownership requirement.

Also, under certain conditions, an owner could continue with foreign- rebuilding plans without jeopardizing the vessel's right to participate in the fisheries.

The act's American control provisions have had little effect on ensuring U.S.-citizen control of fishery operations. Under the Coast Guard's interpretation of the act's grandfather clauses, vessels that meet applicable conditions are permanently exempt from the act's American control provisions. According to the Chief of Vessel Documentation, nearly all of the vessels licensed for the U.S. fishery at the time the act was passed could likely be grandfathered and, as a result, could be resold to foreign-owned companies that do not meet the new, more stringent conditions. The Coast Guard's interpretation was challenged in court by several U.S. fishing and shipbuilding groups.

Prior to the Anti-Reflagging Act, for a vessel to be documented to fish in American waters, corporate ownership had to meet several citizenship standards. For example, the chief executive officer and the chairman of the board of directors had to be U.S. citizens.

Notwithstanding these requirements, however, the law allowed 100 percent of the corporation's stock to be foreign owned.

The Anti-Reflagging Act made the American control requirements more stringent for fishery participation by requiring that the majority of voting stock be owned by U.S.

citizens. As discussed above, it also added the American control conditions of the Shipping Act of 1916.

But under the Anti-Reflagging Act's grandfather clauses, vessels are exempt from these requirements if either of two conditions was met before July 28, 1987: (1) The vessel was licensed under U.S. law and operated as a fishing, fish-processor, or fish-tender vessel in the navigable waters of the United States or the 200-mile zone established by the Magnuson Act, or (2) the vessel was being purchased for such purposes. Thus, a foreignowned company whose vessel was operating in U.S. waters prior to July 1987, or that had a contract to buy a vessel to do so, could continue to operate or carry out its plans after passage of the act.

The Coast Guard believes that under the act's wording these grandfather exemptions apply to the vessel, not to the vessel owner. Under that interpretation, a vessel that meets the grandfather conditions has a permanent exemption from the new American control requirements.

This means that the vessel can be bought and sold repeatedly without losing fishery privileges, regardless of whether the new owner is a corporation with totally foreignowned voting stock or other arrangements that offer potential for foreign control.

This interpretation is significant for the U.S. fishing industry because of the large number and percentage of vessels that apparently meet the act's grandfather exemptions.

According to the Chief of Vessel Documentation, a total of about 29,000 vessels were licensed for catching fish, and were therefore U.S. built, at the time the act was passed in 1987; and nearly all of them could likely be grandfathered for American control requirements under the act by virtue of the past fishing within the 200-mile limit.

By contrast, he estimated 2,000 new vessels constructed and documented for the fisheries in the two years following passage of the act are subject to the new American control conditions.

This interpretation is also significant for the groundfish industry off the coast of Alaska. About 86 percent of the vessels we reviewed would likely meet the American control grandfather exemptions. According to the Coast Guard's Chief of Vessel Documentation, the lives of these vessels could be extended almost indefinitely by periodic rebuilding in the United States.

In addition, the Chief estimated that about 800 of the 29,000 vessels in the United States, licensed for fish catching when the act was passed, meet the grandfather exemptions and are well suited for rebuilding or conversion into factory trawlers or other types of relatively large vessels that now dominate groundfish operations in Alaska. Thus, any number of these vessels could, at any time in the future, enter the Alaska groundfish fleet without needing to meet the new American control provisions.

Several U.S. fishing and shipbuilding groups have filed a lawsuit to overturn the Coast Guard's interpretation.

These groups contend, in part, that the grandfather clauses should apply to the vessel's owner, not to the vessel itself. Under this interpretation, vessels that were sold would continue to be eligible for participation in U.S. fisheries only if the new owners met the American control requirements.

In contrast to the Anti-Reflagging Act's American control provisions, which may have little impact on U.S. control of the fishing industry, its prohibitions against foreign rebuilding are likely to have a significant effect. While much foreign rebuilding continued after the act under its grandfather clauses, the period for delivering rebuilt ships to the owners ended on July28, 1990.

Because future rebuilding in foreign shipyards will result in the vessels' ineligibility for U.S. fishery privileges, owners who desire to rebuild their vessels will likely choose to do so in U.S. shipyards. 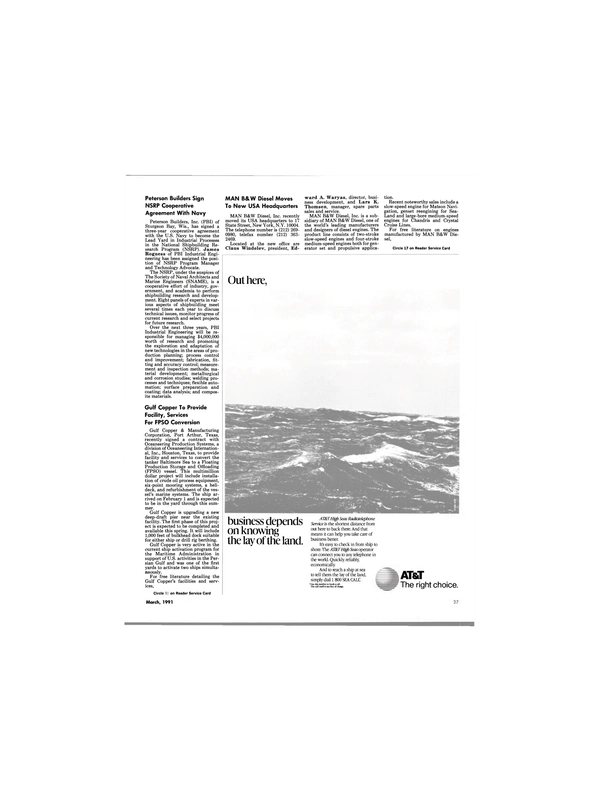 Read Effects On The U.S. Fishing Industry By The Anti-Reflagging Act Of 1987 in Pdf, Flash or Html5 edition of March 1991 Maritime Reporter