The 10th in a series of 16 auxiliary fleet oilers under construction for the U.S. Navy by the Shipyards Division of Avondale Industries, Inc., was christened the USNS Big Horn (T-AO-198) in ceremonies held recently at the yard. The vessel is scheduled for delivery this fall.

The Big Horn and her sister ships in the T-AO Class are 667 feet long with a beam of 97 feet and a maximum draft of 36 feet. Their primary mission is to transport bulk products from shore depots to combatants and support forces underway.

The USNS Big Horn has a cargo capacity of 183,500 barrels of oil in 18 cargo tanks and is capable of simultaneously receiving, storing, and discharging two separate grades of cargo fuel. All cargo pump and valve operations, and the ship's segregated ballast system are manipulated from the Cargo Control Center, located in the aft superstructure with an overview of the entire underway replenishment deck.

Avondale Industries, an employee- owned company headquartered in New Orleans, is one of the nation's leading marine fabricators.

In addition to its shipbuilding operations, Avondale specializes in boat and landing craft (LCAC) construction and is a major marine repair contractor for commercial and U.S.

Navy vessels. It is also involved in the modular construction of components and plants for a variety of land-based industries.

For free literature on the facilities and capabilities of Avondale, Circle 35 on Reader Service Card 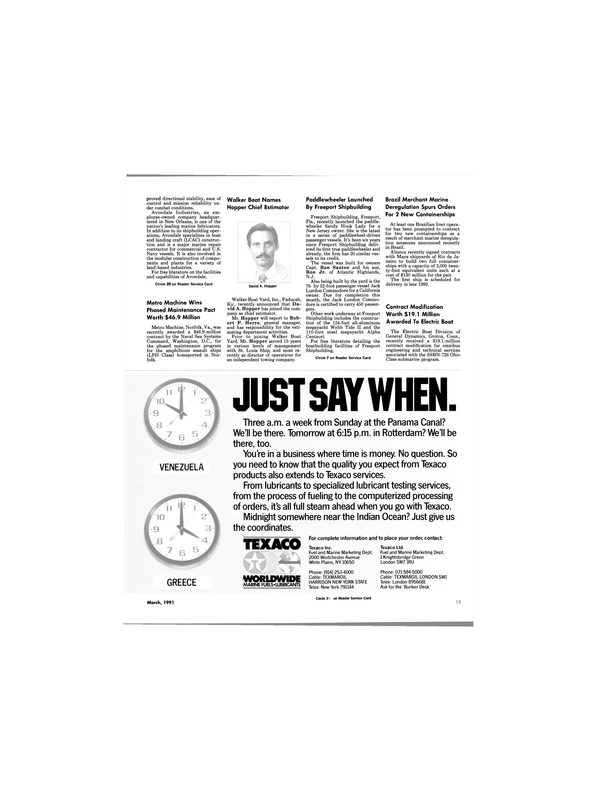