The first contract is for the detail design and construction of two TAGS- 60 Class oceanographic survey ships with an option for a third ship.

Total value of the program , including the option, exceeds $100 million.

The second contract, an option exercised by the Navy, worth about $38 million, involves the construction of seventeen 78-foot all-aluminum fast patrol boats. All of the boats will be built at Equitable Shipyards, Inc., New Orleans, La., a sister shipbuilding company of Halter Marine in the Trinity Marine Group.

The Navy and Halter had previously signed contracts totaling $16.4 million in September 1989 and April 1990 for the construction of eight 78-foot fast patrol boats (PFC) for use by the Philippine Government. Two of the eight boats have been delivered.

Commenting on the T-AGS-60 contract, John Dane III, president of the Trinity Marine Group, said the program will span four years and will provide direct shipyard employment for up to 400 people, including subcontractors and other indirect employment. He added that the economic and technical support will be provided by the Trinity Marine Group corporate office in Gulfport, Miss. Equitable Shipyards and another Trinity shipyard will provide cut steel and some steel fabrication.

Tne new class of ship will have a displacement of 4,700 tons, a dieselelectric propulsion system and a length of 328-1/2 feet and will be capable of performing oceanographic survey operations in coastal and deep ocean areas.

Halter Marine will complete the detail design and construction of the first T-AGS-60 Class ship within 36 months, with the second and third ships delivered in subsequent six-month intervals.

For free literature detailing the shipbuilding and ship-repairing services of the Trinity Marine Group, Circle 101 on Reader Service Card 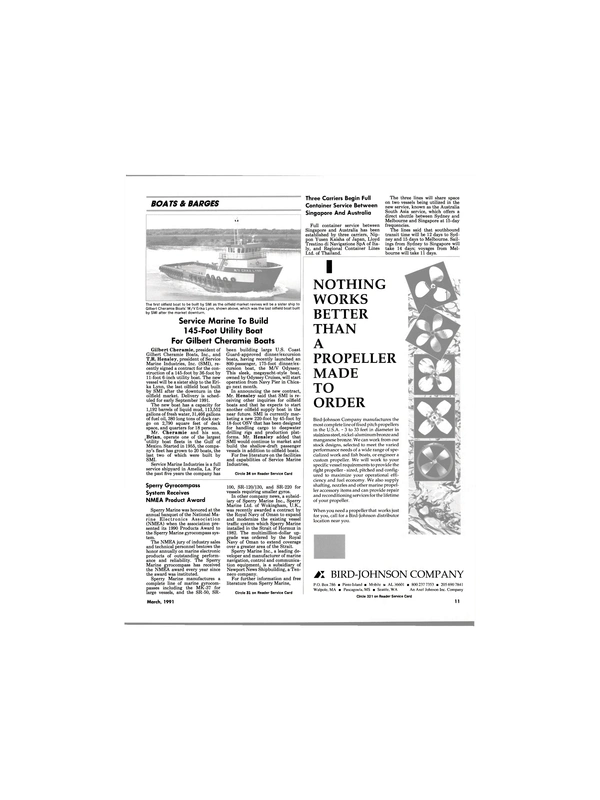