The shipbuilding cluster in Ihe Netherlands' northernmost provinces is drawing fresh incentive from the market's reviving interest in the modest classes of ship needed to serve intra-European trade, and also to transport small parcels of goods between Europe and the Americas.

A clutch of orders confirmed just prior to the Europort '99 event, where northern firms were encouraged to see a strong attendance by the shipowning community, vindicated the latest design endeavors at the lower end of the tonnage scale.

Among the recent additions to the workload, four 3,300 dwt maids-of-allwork were booked by Frisian shipbuilder Tille Scheepsbouw, while a new 7,250 dwt, ice-reinforced multi-purpose design generated a two-ship contract for the Hoogezand yard of Bodewes Scheepswerven. One of the common threads in the succession of dry cargo vessels developed by Bodewes is the adoption of moveable bulkheads in the box-like holds. The simple expedient of incorporating a portable separation, whether in a one-hold or two-hold ship.

While economies of scale favor much of world trade, an ability to make recourse to efficient means of conveying raw materials, forestry products, steel and other semi-finished goods, can have important logistical and inventory benefits for many producers and buyers.

As with the 6,700 dwt sisters Andromeda and Capricorn, the latest newbuilds from the Bodewes Scheepswerven canal side establishment, the two-hold 7,250 dwt class incorporates moveable, partial tweendeck pontoons that can be deployed as vertical separation bulkheads.

The preceding S-class series of 4,300 dwt vessels similarly featured a three-section, portable bulkhead, albeit in a single, box-like hold. The Andromeda type, like the S-class, is expected to strengthen the charterer's transatlantic operations.

Meanwhile, Tille Scheepsbouw has employed hull forms used in a breed of small feederships as the basis for a range of multi-purpose traders spanning the 2,000-4,000 dwt band. The new Tille Trader family accordingly offers laden speeds one or two knots faster than the average bulk commodity carrier on the coast. The design move is also notable in demonstrating that newbuild cargoship tonnage down to 2,000 dwt can still be competitively produced in northwest Europe. Tille's latest round of contracts emanates from owners based in the northern part of the Netherlands, and concerns the 3,300-dwt version of the new type. 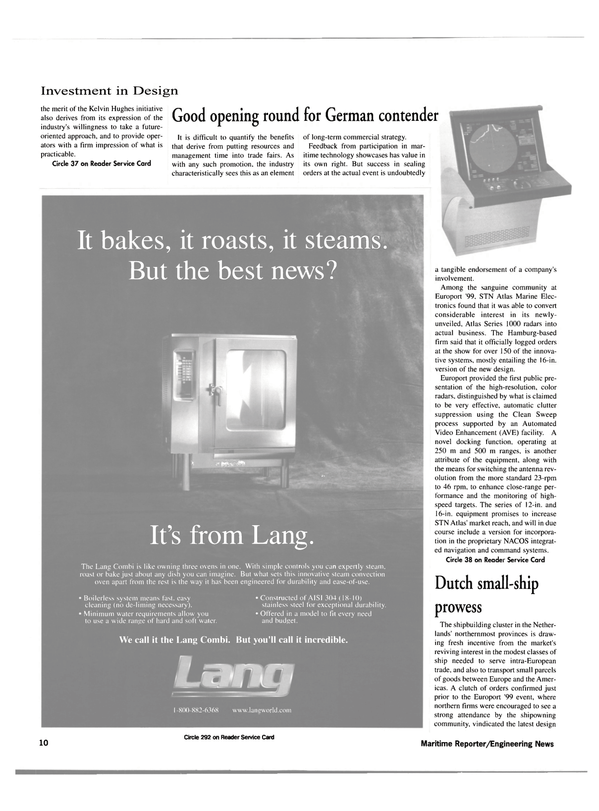