While many facets of the maritime market remain stuck in the doldrums, the passenger vessel end of the market is one which should continue to expand robustly through the coming year and far beyond. The cruise ship market continues its stampede forward, with 13 new ships and more than 16,000 berths coming on line in 1999 and 14 ships and more than 18,600 new berths scheduled to be delivered in 2000. On the smaller passenger vessel side, a significant development occurred last month when Australia's Austal Ships announced its new partnership with Bender Shipbuilding to construct a new facility in the Mobile area and vigorously pursue both passenger vessel and government contracts. As an industry leader in the design and construction of aluminum fast craft, this should serve as a strong signal that the U.S. passenger vessel prospects are positioned to perk up.

While most of the news emanating from the passenger vessel sector is positive, there are some disturbing trends which will command increasing attention from owners, builders and suppliers. There are an increasing number of lawsuits being brought about by passengers against carriers in the case of accident or mechanical failure. London law firm Lawrence Graham, in fact, has warned that cruise shipping companies are increasingly vulnerable, and that shipping companies in general can expect to face more stress at work personal injury claims.

The latest potential suit to the long list of litigation in 1999 revolves around reported engine problems on Carnival's Paradise, which was said to have hampered the millennium celebrations of several hundred passengers.

At press time there were reports that there was a lawyer — who happened to be onboard the ship — who was chosen to head a committee to pursue a "possible" suit against the carrier. While it is understandable that passengers should expect comfort, safety and service to be the highest priority, it should similarly be noted that the litigation-happy public seems more than willing to take passenger vessel owners to court, and prudent protection measures should be enacted. 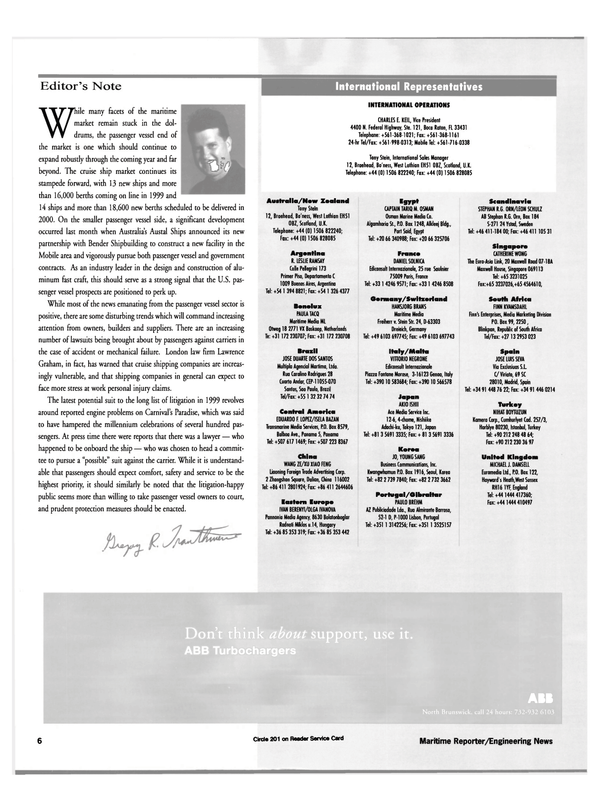