Two circa-1980 vessels are moored — decommissioned, but preserved from corrosion — in the frigid, dry climate of Murmansk, Russia. The hulls are a superior grade of 22 mm thick steel - not economical to duplicate today, and of significant value. The challenge: rebuild the vessels to meet newbuild standards.

and use them in a pending long term contract with a large oil company to supply offshore rigs in the huge Terra Nova oil field off the east coast of Newfoundland.

After purchasing the vessels from a Russian oil company in 1998, Secunda transported them to their Dartmouth shipyard. There, the boats were completely gutted in preparation for a rebuild to replace all equipment and meet newbuild standards. In each boat.

Secunda investigated many suppliers for the automated alarm and cargo operation systems, but found the solution right in their own backyard.

The pump and valve control system provides automated control of 112 valves, and remote start/stop of 14 cargo pumps that handle liquid cargo (such as potable water, liquid mud, drill water, mineral oil or brine). The alarm and monitoring system monitors the condition of the main engine, gearbox, shaft lines, thrusters, generators and bilges, generating an alarm when certain set points or thresholds are reached. Finally, the tank sounding system automatically measures the quantity of fluid in approximately 50 cargo tanks. According to Robert Field, Trihedral Control Systems Engineer on the project, "The pace and complexity of this project were a particular challenge. The system design was changing continually, but the flexibility of the software allowed us to accommodate the changes as we progressed through the rebuild, commissioning, and sea trial stages." With an overall length of 269.7 (82.2 m), breadth of 52.1 ft. (15.9 m) and draft of (20.3) 6.2 m, the MV Trinity Sea is currently working and the MV Burin Sea has completed sea trials, undergoing rigorous testing to meet Secunda's standards.

According to company sources, Secunda exceeded the expectations of their large oil company client by providing a fully automated system. 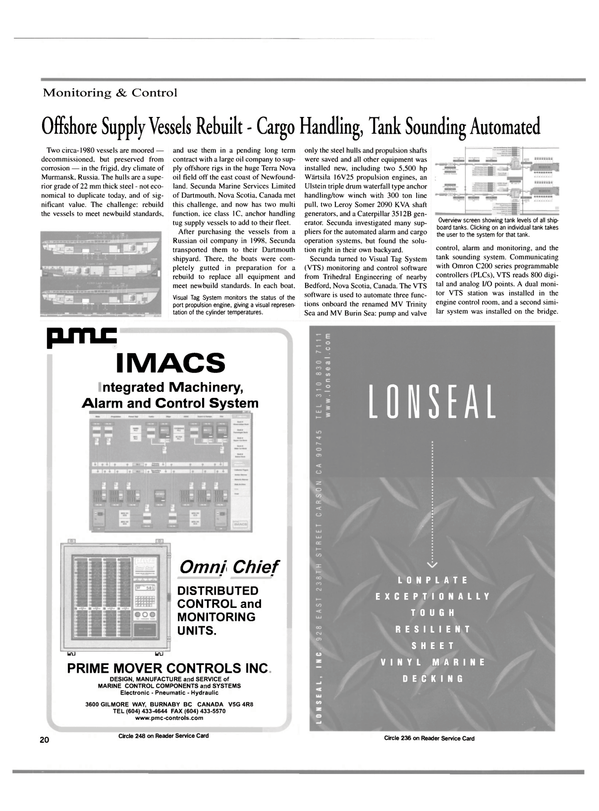