Along the designated route for Bo Hengy is a treacherous three-mile section located at the northern tip of Eleuthera. Known as the Devil's Backbone, this is the sole way around the north end - the primary destination of Bo Hengy. As a result, a comprehensive risk assessment was carried out to evaluate the risks associated with operating the vessel on the inter-island route.

The IMO High Speed Craft Code (HSC Code), was evaluated from a standpoint of risk mitigation in addition to external factors that were considered for downside potential with regard to safety. Findings based on the evaluation stated that the Bahamas environment is conducive to the operation of such a ferry service, and yet hazards still do exist which if not properly examined - could result in accidents - which could be fatal. The Risk Assessment led to various recommendations, such as the required installation of a Portable Pilot Unit, undertaking of enhanced training and that crew scheduling should take fatigue factors into account.

To ensure that proper safety measures are being taken, Hornblower Marine Services (HMS) specified that installation of a Starlink DGPS system.

Both accurate and repeatable, this equipment suite offers an appropriate level of navigation enhancement - essential at high speed. Traditionally coupled with a laptop computer and the appropriate antennas, the Invicta 210M DGPS/Beacon Receiver provides an accurate navigation tool used by pilots for the transit and docking of ships. In the instance of M/V Bo Hengy, HMS matched the unit with an installed computer and flat screen display rather than a laptop. Utilizing Ocean PC marinized computers and a 15-in. high resolution flat screen display, placement of the display in an appropriate location on the dash of the vessel was an intricate consideration from an ergonomic standpoint.

Reconfiguration of the dash layout was required to offer the captain an accurate view from the screen.

Additional operating challenges included the building and commissioning of the vessel to the High Speed Craft Code under the Bahamian Flag, fueling and resupply logistics, maintenance and repair, mooring and boarding ramps, as well as the vessel timetable and crew training.

Although Hornblower routinely collaborates with the U.S. Coast Guard on similar matters, the idea of operation under another administration offered additional challenges. The London office of the BMA, along with Det Norske Veritas and the builder had detailed various critical issues with regard to the design, outfitting and construction of the vessel to the IMO High Speed Craft Code (HSC Code). Keeping in mind a possible inclusion of a number of normally required components, such as a sprinkler system and SOLAS approved lifeboat and davit, both the vessel owners and builder sought an early approval.

In each case of variance from the HSC Code alternative safety measures were proposed to provide a sufficient level equivalency for HSC Code requirements.

In some cases, the route geography and water temperature played a role.

As the vessel was in preparation for delivery, voyage departure roadblocks with class certificates and registry were remedied and a High Speed Craft Safety Certificate (Bahamas version) was administered - with special allowances agreed per the parties and agencies - which are noted on the certificate.

As a result, BMA issued the HSC Code required Permit to Operate. Early on during the HSC Code compliance discussion that occurred with the BMA, the subject of safe manning and training levels came up. It was understood from the beginning that the agency would not consider the standard license issued in Nassau by the Port Authority as acceptable for the operation of this new high-speed passenger vessel. Although the service was to be offered on a domestic route - known in the Bahamas as a "Home Trade" vessel - it was agreed that additional training and certification would be necessary. This would in turn satisfy the requirements of the flag, owners, underwriters and standards. In addition to the training program, HMS has deemed it a necessity to provide a high level of active support throughout the daily operation of the vessel. A set of standing orders were recently developed to assure that Masters are operating the vessels on a consistent watch to watch basis. 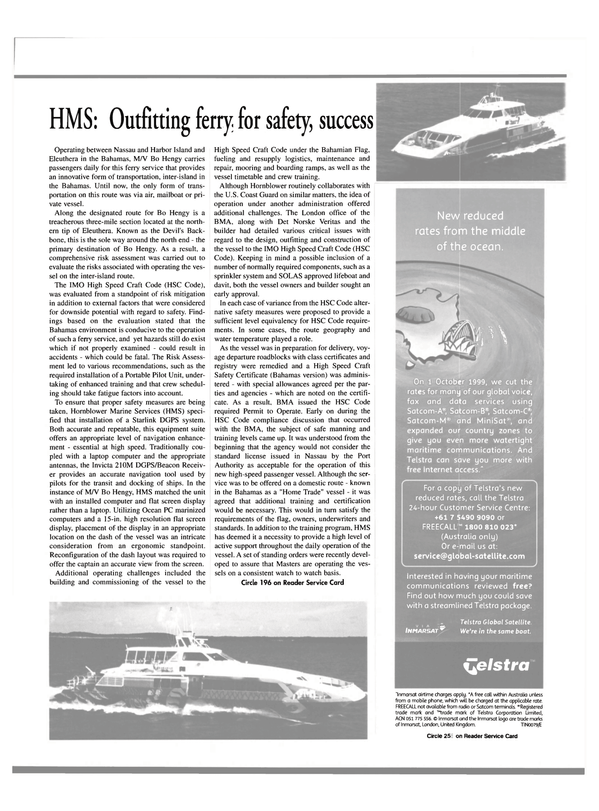