The 7,360-dwt Dawn Merchant melds a high operating speed, sustainable in bad weather, and an exceptional standard of passenger accommodation with 'best practice' as applied to Ro-Pax ferry design. But she is also a cut above many other units deployed by regional operators, as one of the first RoRo passenger ships to fully comply with the so-called Stockholm Agreement edicts, incremental to IMO damage stability and survivability requirements, governing such vessels working in North-West European waters. The ferry has accordingly been designed to withstand flooding to 50 cm on the main deck.

Dawn Merchant's birthmark is her 79.7 ft. (24.3 m) waterline breadth governed by the lock downstream of the Sevilla shipyard of Astilleros Espanoles (AESA). Cenargo has ordered four such $64 million vessels to date from AESA, although the program may be extended to six. Cargo capacity corresponds to 146 trailer units, with freight-handling effected on a drive-through basis using bow and stern openings. The composition and dimensioning of the powerful propulsion plant, based on four, 9-cylinder Wartsila 38 engines. Manufactured by the Dutch arm of the Wartsila NSD group, the 38-series main machinery gives an aggregate power delivery of 23,760-kW (32,320-bhp). The maximum speed of 23 knots fulfills the berthto- berth schedule to enable each vessel to maintain a daily round-trip rotation.

Freight vehicle transfers between the main and upper deck levels are made by means of two tiltable and hoistable, 183.7 ft. (56 m) long ramps, each able to take four road trailers to a total load of 180 tons. These are placed adjacent to each side casing, and have a 8.2 ft. (2.5 m) high, watertight bulkhead running along inboard side. In keeping with damage stability rules for passenger-carrying RoRos, the use of the tanktop level for revenue-earning purposes has been eschewed in the Dawn Merchant. Her 2.000-lane meters of freight carrying capacity, and a substantial, design deadweight of 7,360 tons, is based on the use of main and upper decks for cargo purposes, with no lower hold. Instead, the space below the main deck is subdivided into 1 1 watertight compartments.

The vessel is designed to have a five to 5.6 ft. full load draft enabling it to access some of the Biloxi area's more shallow waterways. The hull features tunnels to allow large enough propellers while minimizing the draft.

Snohomish will serve passengers on the Seattle/Bremerton route. The new vessel is the sister ship to Chinook, which has been in service on the route since summer 1998. Both passengeronly ferries, which can carry 350 riders, were built by Dakota Creek shipyard in Anacortes. While the vessels are nearly identical to the casual observer, there are, some important differences, explained Cliff Hill, project manager for the passenger-only fast-ferry (POFF) program. On Snohomish, eaves that extend over the doors at the stern of the boat were shortened to make the new ferry lighter. That modification saved one ton, and overall, Snohomish is four tons lighter than its predecessor, said Hill. This type of ferry — a catamaran design with an aluminum hull — performs better if it's lighter, explained Hill. "Any weight savings translates into better performance and lower wake wash on these types of vessels," he said.

Another modification was in the ferry's control system. Engineers also found ways to reduce the noise level in the rear areas of the lower passenger cabin.

Modifying windows, increasing insulation and installing a baffle wall behind the seats, accomplished this. The completion of Snohomish marks the end of a two-boat building process that began at Dakota Creek in March 1997.

With work on the vessel commenc- ing in January 1998, Seacontainers signed the contract three years before in November 1995 for the construction of the three fast ferries.

Holding 800 passengers and 175 automobiles, the monohull light alloy fast ferry measures 328 ft. (100 m) with a beam of 56 ft. (17.1 m). With a propulsion package based on four diesel engines and four steering water-jets, the vessel is also equipped with the comfort ensuring Ride Control System. Safety features include four "dry shod" slide chute escape systems providing a direct route to life-rafts. The first two ferries have been running on North European lines for the past two seasons.

With Manila-based Jet Ferries signing on as its latest customer, the Wavemaster possesses a three class layout equipped to hold 187 passengers for its run between Manila Bay and the industry- oriented area of Mari-Velles. The ferry serves a much needed service of transportation between the two areas after the recent eruption of Mount Pinatubo, which forced the road from Manila impassable as a result of mud and landslides.

The Wavemaster is powered by three MTU 12V 183 TE92s, with only the wing engines equipped for maneuvering and a guaranteed speed of 29 knots and a deadweight of 12 tons. Exhausts are dry and are tunneled through a utility stack including access stairs, vents and C02 storage.

The hull layout allows for a forepeak void accessed via a Freeman watertight hatch containing anchor gear. This compartment has a watertight bulkhead. On either side of the hull, running from the watertight bulkhead aft to the engine room, are the wing voids of the upper canoe hull. These areas contain the water and fuel tanks, ballast effect pumps, fish-feeding devices with through hulls (28 in total), and air handling compressors. There is a watertight bulkhead aft followed by the engine space. Each wing space is sealed from the hull centerline by watertight longitudinal bulkheads. Access is via port and starboard propulsion engines, centerline mounted auxiliary coupled to a generator and the hydraulic pump for bow and stern thrusters. Batteries, inverters and main disconnect switches are aft in the engine space.

Launched from Incat Tasmaina Coverdales shipbuilding facility at Prince of Wales Bay, Hobart, Australia, Bentayga Express was constructed for operation in the Canary Islands by Fred. Olsen, S.A. The 315 ft. (96 m) catamaran entered service in October 1999 between Santa Cruz and Tenenfe and Agaete, on the Island of Gran Canaria. Mea- suring 40 percent larger than Incat's previous 315 ft. (96 m) class vessels, Bentayga's larger structure was accomplished by extending the superstructure aft to the stern and much further forward than normal - almost to the bow. The vessel's interior decor provides the passenger with a "modern, upbeat environment," while the operator is given a sense of "practical, functional and easily serviced" space. With passenger accommodation for up to 900 located on one deck, two classes of travel are offered. One of the vessel's most significant features is a central skylight with concealed fluorescent lighting around the base located in the Centrum area.

This part of the ship boasts tub style seats in clusters of four situated around circular tables, with additional rows of aircraft-style seating on either side. Bentayga Express reinforces the company's intention of maintaining a dominant presence in this niche of the fast ferry market. Offering a vehicle deck of 330 truck lane meters (at 2.7 m wide and 4.3 m clear height), and 370 car lane meters (at 2.3 m wide), thus providing the operator with the flexibility of transporting mixed traffic or up to 260 cars. The raised control station onboard the vessel is surprisingly small, but its large windows provide 360-degree visibility while an aft-facing docking console and television monitor replaces the necessity for bridge wings and their associated structural weight. As with all recent Incat vessels, the control station is outfitted with the most recent electronic, navigation and communication equipment in compliance with the High Speed Craft Code Sea Area A2.

Powered by four Caterpillar 3618 medium speed diesel engines, develop- ing in excess of 28.000 kW - the engines drive transom-mounted steerable Lips 150D waterjets, via Reintjes VLJ6831 gearboxes. All four waterjets are configured for steering and reversing while an independent hydraulic system in each hull covers the steering and reverse functions. In conjunction with Maritime Dynamics, Incat has developed a fully integrated Ride Control System.

The vessel, which is the largest passenger catamaran to be constructed by Nichols, will run between Long Beach and Catalina Island at a speed of 36 knots.

The system, supplied by Maritime Dynamics is comprised of trim tabs and T-foils beneath the twin hulls to counteract the pitch and roll motions as caused by rough seas.

The catamaran is also equipped with three decks with indoor seating for 400 passengers and top side open air accommodations for an additional 50 people, as well as airline type and dinette seating.

The vessels' design features a maximum air draft of 6 ft. — unique among the passenger vessel industry. Despite this low air draft, the interior is exceptionally luxurious for a scheduled commuter service liner. Able to accommodate up to 46 passengers.

At the beginning of 1999. Bender Shipbuilding in Mobile. Ala. delivered M/V Juanita Candies to Otto Candies, Inc. The vessel immediately departed Mobile enroute to Fouchon, La., where it went on long-term charter to Conoco in support of the company's deepwater drilling program. Both Juanita Candies and sister vessel Agnes Candies have gone to work on high profile, deep water drilling projects. According to operations personnel from Candies, the vessels have been adept at performing all missions very well. In particular, their customers comment positively in regard to the vessels' fast cargo pumping rates, station keeping ability and stability in high seas.

The Agnes Candies crew reported that the first time the vessel was called upon to unload in 10 to 12-ft. seas in the d/p mode, they experienced heavy rolling in the beam sea. The flume tank was filled to the required level, the roll smoothed out and the Agnes Candies proceeded to unload. 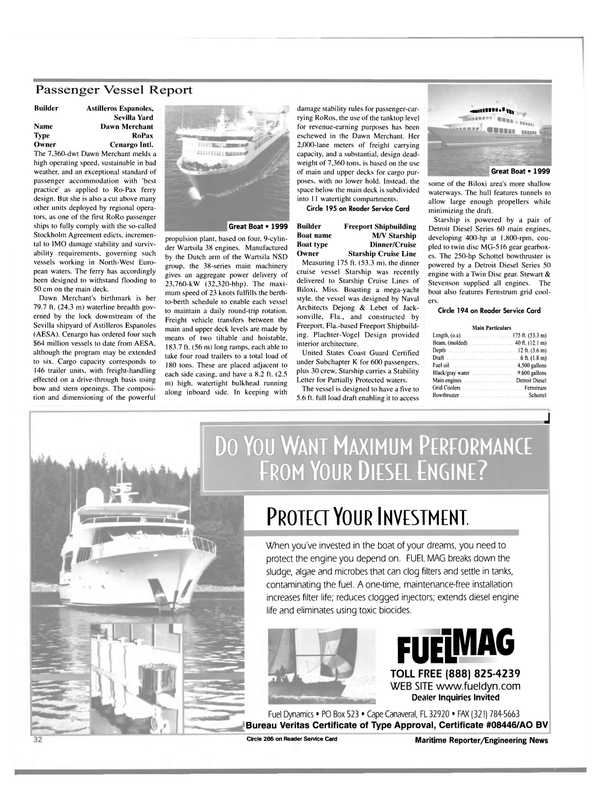