When operators of properly equipped tugboats receive a system alarm, they know there is a real problem. They also know that they're not going to get any help from an on-board engineer because the operator is the only one on board.

But Quebec-based Techsol, Inc.'s helps reduce the alarm, thanks to new Marine Automation Control System (MAX) installed in several harbor tugboats designed by Robert Allan Ltd. This state-of-the-art alarm, control, and monitoring system eliminates both false alarms and the need for an on-board engineer, making it possible for only the pilot and shore engineer to handle any problems that might arise.

Techsol. a marine electrotechnology company, created this Unmanned Machinery Space (UMS) system to enable pilots and shore engineers to have a complete picture of a vessel's system via graphical displays and touch screens. Designed to replace existing dedicated systems that were not user friendly, this modular system was built using off-the-shelf equipment from Charlottesville, Va.-based GE Fanuc Automation and adapting it to meet requirements for shipboard systems. GE Fanuc received certification for the components for use in marine applications with the American Bureau of Shipping and Lloyd's Register.

The Series 90-30 field I/O modules are dedicated to specific equipment, and the MAX system requires five or six of these units to achieve complete ship automation.

Because each field I/O module is equipped with a central processing unit (CPU), it can accept input from switches and sensors and generate output to control machines and processes without relying on the processing power of the central PLC. Thus, they can act as standalone devices able to carry out normal functions and keep the machinery operational if the central system fails. Additionally, their autonomous nature provides faster processing and greater reliability.

The modules have the capacity for self-diagnostics down to the sensor level and can generate fault reports on open wire, short circuit, under and over range, and wiring error. These digital and analog modules communicate with up to 700 sensors that monitor operating conditions on the boat's propulsion and auxiliary systems, including main engines, generator and pump control, switchboard logic, fuel transfer, and steering.

When a sensor receives information, such as a fire in the starboard engine, it transfers this information to the fire detection field I/O module. The module then takes immediate tire-suppression steps, sounds an alarm, and also notifies the central PLC of the problem via a high-speed data bus. The Series 90-30 PLC relays this information to the other modules, which take the appropriate self-preservation steps on equipment that they monitor. At the same time, the central PLC converts the information and sends it to the user interface, which shows the operator the type and exact location of the problem. If a field module fails, the central PLC will take over the control for that unit until the fault is cleared, providing a basic level of redundancy at no extra cost.

Opening Windows The CIMPLICITY software receives data from the PLCs and I/O points, acting as a central operator interface for various local and remote controls. This easy-to-use graphical interface was developed on a Windows NT platform, and, in Techsol's applications, is composed of marine-approved computers and touch-screen displays. The software employs an object-oriented approach that makes it simple to create screens to handle any number of operating parameters.

Pre-built and pre-configured screens are readily adapted using graphic tools. A built-in graphics editor incorporates Windows-type toolbars on the development screen. The user simply selects a tool for drawing, or for adding text and button objects. An Object Linking and Embedding (OLE) button eases importation of OLE 2.0 objects such as spread sheets, charts, and bitmapped images. Once objects are created, they can be resized, rotated or moved using the "handles" that appear when the object is selected. Additionally, operators are able to switch CIMPLICITY screens in less than half a second, ensuring accurate data and quick response.

Since CIMPLICITY was developed under Windows NT, it interfaces easily with any third-party equipment, and screens can be easily adapted to reflect replaced or upgraded equipment.

Techsol took advantage of the software's open architecture by creating AutoCAD drawings of the engine and importing them into CIMPLICITY.

Since the screens were developed using actual ship equipment, what the operator sees on screen accurately depicts the equipment and its exact location on board. MAX has 13 to 20 different screens, and most equipment graphics displayed on the screens relate detailed information in response to a touch by the operator's finger. This configuration gives the operator easy comprehension of the system layout without any specific or advanced technical knowledge, which is a key benefit of the Techsol system.

One company that has seen this benefit firsthand is Robert Allan Ltd., Canada's oldest privately owned consulting naval architectural firm, providing marine consulting and design services to a worldwide client base. Headquartered in Vancouver, the company specializes in tug and barge transportation, shipassist and escort tugs, and fast patrol craft "Our principal products as naval architects are high-performance tugs with very low levels of manning." says Robert Allan, president and owner of Robert Allan Ltd. "A very high standard of automation is required, and that really implies a system like the one Techsol is producing," CIMPLICITY's high standard of automation allows MAX to be controlled by only one on-board operator, and its flexibility permitted Techsol to design a system that generates no false alarms. That's 110 easy feat by marineworld standards.

Techsol created custom scripts, or algorithms, for MAX. By following these algorithms, the system reacts to varying conditions and eliminates possible false alarms. For example, when a tugboat maneuvers, fuel has a tendency to slosh around in the tank, generating low-fuel alarms. With MAX, when the pilot maneuvers the boat, input from the joystick automatically disables the fuel tank low-level alarm, so sloshes will not cause alarms.

According to Messiaen. U.S. Navy representatives recently experienced a trial run and demonstration of a tugboat equipped with MAX. and were impressed when the system did not give any false alarms. Civilian watercraft makers are also impressed with MAX.

as well as makers of luxury yachts and large offshore tugs. Techsol is also working with a U.S. engine maker to specify MAX as the standard control system for their engines.

Techsol installs MAX in new construction as well as retrofits, and the team has found that the system merges easily with existing equipment. So easily.

in fact, that Techsol retrofitted a control system on a 400-car ferry over a five-week period without ever having to take the vessel out of service.

"When we do retrofits, we try to save what we can," Messiaen says. "We use MAX with the existing equipment, especially sensors, and the modules from GE Fanuc are wonderful at integrating with the on-board architecture." In the future. Techsol looks to integrate the CIMPLICITY software with a predictive maintenance package. By incorporating predictive maintenance into their system. Techsol will be able to expand MAX's capabilities, enabling it to automatically inform the operator when preventive and regularly scheduled maintenance should be performed.

Not only will the new system eliminate false alarms, it will help prevent true alarms from happening with preventive maintenance. Now that's keeping a ship afloat. 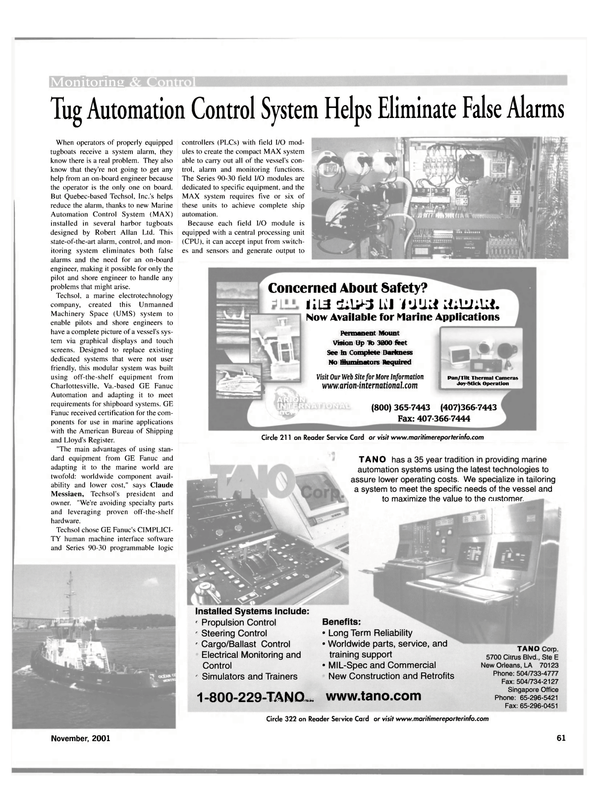