High-Speed Debut on the Lakes

MTU Friedrichshafen has broken new ground for the latest high-speed diesel technology, landing a deal whereby its potent 8 0 0 0 - s e r i e s engines will be used to power a large catamaran ferry intended for Lake Ontario operation. A 32,800-kW plant based on four examples of the 20-cylinder engine has been nominated for an Austal 282-ft. (86-m), RoRo equipped catamaran, designed to transport 774 passengers and 227 cars, or 10 trucks plus 70 cars, at a cruising speed of 42-knots. The vessel is intended to forge a new fast ferry link between Rochester and Toronto next summer, offering a 2.5-hour waterborne route alternative to a typically five-hour road journey.

The installation signals the incursion of highspeed diesel machinery into a market segment hitherto regarded as the province of powerful, medium-speed engines and gas turbines. It also highlights MTU's early commercial success with the 20V8000, which had attracted 32 engine sales in a period of little more than 12 months since its September 2000 unveiling at the SMM Exhibition in Hamburg.

The 8000-series ranks among the world's first fourstroke engines in the 8,000-10,000 kW segment to incorporate common-rail fuel injection.

mindful of the space constraints of the vessel types forming its target marine markets.

The debut order for the design announced at last year's SMM show entailed four units at the 9,000-kW rating to provide an enormous propulsive power concentration of 36-MW in a mega-yacht of 453 ft. (138 m) contract- ed by German shipbuilder Lurssen Werft. Besides the new catamaran RoRo ferry application, subsequent business has included a commitment to the 20- cylinder engine of 9,000-kW output for a series of all-diesel corvettes ordered by a navy in the Far East. MTU is now pursuing new opportunities for the 20V8000 in diesel-electric propulsion systems and as landside power generation plant, and also plans to roll-out 12V and 16V versions in due course. 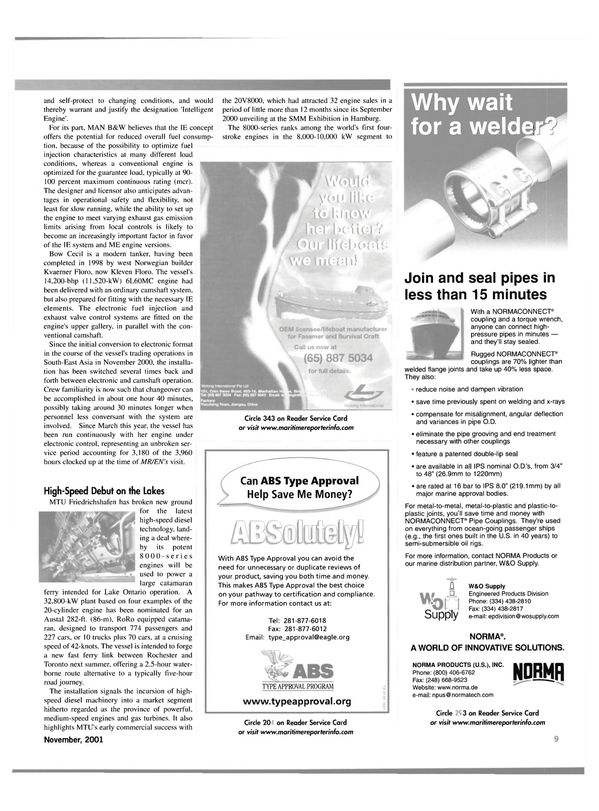 Read High-Speed Debut on the Lakes in Pdf, Flash or Html5 edition of November 2001 Maritime Reporter