USCG Sturgeon, built by Bollinger Shipyards for the U.S. Coast Guard at Grand Isle, La. Was a welcome sight.

Sturgeon is the 36th of 50 nearly identical vessels being built by Bollinger for the Coast Guard in a contract worth more than $200 million.

The new shallow draft cutter is designed to operate up to 200 mi. offshore, as well as near shore. It is equipped with a larger pilothouse than the boat it replaces, providing 360- degree visibility with an integrated and sophisticated command and control system.

Sturgeon is capable of meeting its maritime missions of search and rescue, law enforcement, marine environmental response and protection, commercial vessel safety, recreational boating safety and national defense. It is designed to work closely with the Coast Guard's future deep-water assets and all of its aircraft. The cutter is uniquely capable of providing home defense and is expected to provide added security for Louisiana Offshore Oil Port (LOOP) and offshore energy platforms.

According to Boysie Bollinger, the terrorist attacks on the United States on September 11 have once again focused attention on the Coast Guard and its inestimable value to our country and its homeland security. Within minutes after the attacks on the World Trade Towers, Coast Guard Cutters and their crews were assisting in the area emergency response agencies. They transported medical aid and logistical personnel and provided security for New York harbor.

tor tugs that they have recently constructed for McAllister Towing and Transportation Company, Inc. Vieki M. 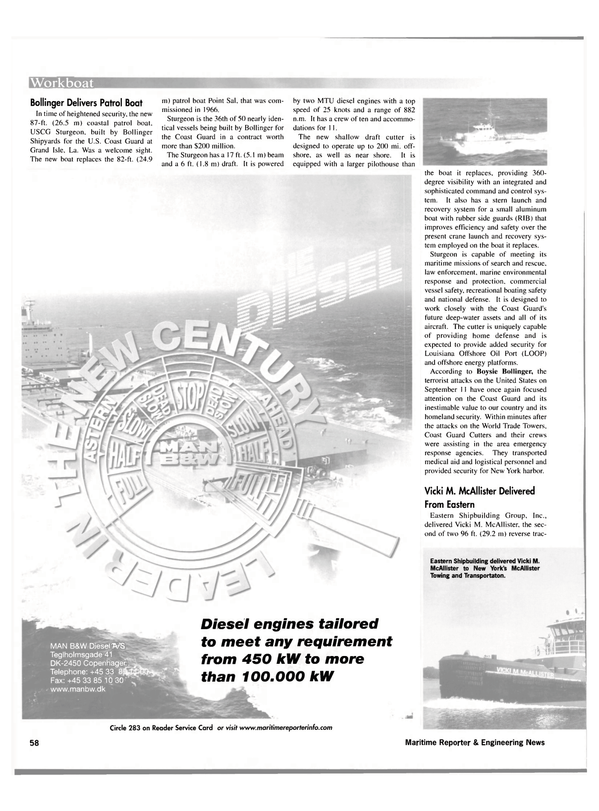