Testament to the Spanish state-owned group's determination to raise performance throughout the organization, IZAR is on track to deliver a high-grade R0R0 passenger ferry only 20 months after contract signing. The launch of the 6,300-dwt Murillo a month ahead of schedule has also underscored the latent scope of the shipyard at Seville, where a substantial upgrading and modernization program has been set in motion. Earlier concerns over work continuity at the premises, Spain's furthest inland shipbuilding facility, have been allayed by the decision to entrust Astillero Sevilla with the production of 70 double-bottom blocks for LNG carriers to be constructed by other yards within the group.

Moreover, the agreement recently signed by IZAR with an Algerian ferry operator means that Seville is set to be entrusted with an additional RoRo, which will follow on from the yard's assignments in gas tanker block fabrication.

Compania Trasmediterranea's 590.5-ft. (180-m) Murillo, and the 475.5-ft. (145-m) newbuild to be laid down for Algiers-based ENTMV, underscore the yard's advance in the RoRo and passenger ship sectors.

Investment to the tune of more than $20 million is being spent on the yard to sharpen its competitiveness in the market for medium-sized vessels. Moreover, a plan for the construction of a new lock of 115 ft. (35 m) width figures prominently in proposals by the authorities to improve maritime access to the port, along with the deepening of the fairway from 21 to 28 ft. (6.5 to 8.5 m).

While boosting the port's commercial scope, realization of the project would of course significantly increase potential newbuild size from IZAR's Seville facility, and better enable the yard to act on the opportunities it perceives in target markets.

The shipyard plays a vital role in the local economy and gives added industrial dimension to the Guadalquivir, which provides Seville with a 98-km conduit to the sea. Murillo is one of the largest vessels that can be delivered from the shipyard, given the present constraints imposed by the width of the lock connecting the industrial port area with the tideway. Its beam of 80 ft. (24.3 m) at main deck level is the practical maximum for transit through the existing lock.

The design used by IZAR for a series of RoPax ferries built for the U.K.

owner Cenargo International, manifested in the 22,152-gt Dawn Merchant and Brave Merchant of 1998-99, and in the Northern Merchant and Midnight Merchant of 2000, has provided the basis for the Trasmed ferry Murillo. The latter employs the same hull form and main dimensions, although the hull envelope has been optimized in the Spanish ship with increased RoRo capacity, surmounted by more passenger accommodation.

There are also differences in the equipment specification.

Having an existing template, though, has undoubtedly contributed to the yard's efficient production of the latest vessel. At the time of MR/EN's visit, IZAR yard management expected to be ready to deliver Murillo ahead of the contractual delivery date. Trasmed had initially looked to phase the vessel into service in May 2002.

Two large, tilting ramps are located on either side of the garage section to provide conduits for freight transfer between the main and upper deck levels.

As key elements of the cargo access equipment outfit designed and supplied by MacGregor to ensure the expeditious working of the ship in port, the ramps and integral end-flaps measure 180 ft.

(54.9 m) overall, and offer a driveway breadth of 10 ft. (3.2 m). Each ramp can be lowered at either end by means of disconnecting hinges, and stows flush in the upper deck when not deployed, forming a watertight closure. Hoisting and lowering is affected by means of a wire system anchored at the deckhead, passing around sheaves and attached to pulling cylinders mounted within the ramp structure.

A hallmark of the preceding series of vessels delivered to Cenargo was the thoroughness with which the design was developed in respect of pertaining and foreseen regulations relating to passenger- carrying ferries. Accordingly, features such as flood control doors and associated, half-height longitudinal bulkheads have been perpetuated in Murillo.

The jalousie-type, MacGregor flood control doors are arranged at the fore and aft ends of the longitudinal bulkheads which run for about half the length of the main deck, bordering the lanes on to which the tiltable ramps land. In the deployed position, the jalousie doors form barriers between each half-height bulkhead and the side shell, and are watertight at their base and vertical sides. When open, the flood doors stow parallel to the deckhead.

In the Dawn Merchant series, Cenargo chose to leave the underdeck spaces void, in keeping with the short-haul, fast-turnaround nature of its Norse Merchant Ferries' operating network. However, in Murillo's case, the lower hold volume has been used to augment revenue- earning capacity. By incorporating two short car deck levels in the underdeck areas available in the foreship section, the designers have provided an extra 396 car lane-m to supplement the 1.900 trailer lane-m on the main and upper decks. Fixed ramps are arranged between the main deck and deck 2, and between deck 2 and the tank top.

Another key difference that will influence the working of the ship in relation to the modus operandi applied to the British series is the concentration of all RoRo traffic movements on and off Murillo across a stern ramp. By comparison, the Cenargo sisters were delivered in drive-through configuration. Once again, the requirement for both bow and stern door access in the previous series was determined by the nature of the Irish Sea and English Channel trades, where rapid turnarounds in port and high ship productivity are operational and commercial necessities.

The Spanish vessel's hydraulicallyactuated stern ramp/door has been constructed in one main section, hinged at the stern threshold and incorporating shore-end flaps and internal bridge plates to ensure smooth vehicle transition.

Murillo has a longer superstructure than the earlier ships from Seville, since it has been fitted with accommodation for 546 passengers, more than double that incorporated in the Dawn Merchant class, and a factor of the different trading scenarios and operational objectives of the respective owners. Cabin berths are provided for a total of 396 passengers, including 300 in four-berth cabins and 76 in two-berth cabins.

A Wartsila-Lips package encompassing main and auxiliary engines, and shafts and propellers has been supplied to the new Trasmediterranea vessel.

whereby the propulsion plant has been dimensioned to ensure a rapid service speed of 22.8-knots. Despite the increase in both RoRo intake and passenger capacity, its speed has only been penalized by about half a knot compared with the Cenargo ships. Four nine-cylinder examples of the Wiirtsila 38-series engine drive pairs of Lips controllable pitch propellers through Reintjes reduction gearboxes.

The nomination of the 380-mm bore, medium-speed design in its original A version, as opposed to the 10-percent more powerful B-type. gives unit ratings of 8,075-bhp (5,940-kW) and a consequent, overall power concentration of 32,300-bhp (23,760-kW). All four engines were produced in the Netherlands at Wiirtsila's modernized Zwolle plant.

The rotational energy of the prime movers will be harnessed to greater purpose through the expedient of a power take-off (PTO) on each gearbox.

In each case, this will drive a shaft alternator sized to give 1,400-kW at 1,800-rpm, serving at-sea electrical power needs. Additional and alongside electrical energy requirements will be covered by an auxiliary installation based on three 1,360-kW Wartsila diesel gensets. The preceding RoPax quartet from Seville had a more extensive shaft alternator installation, using four such units, with a commensurate reduction in the auxiliary engine outfit.

Murillo's pair of 1,300-kW bow tunnel thrusters from Brunvoll will place a substantial, intermittent load on the system, in conferring the requisite maneuverability to which the vessel's flap-type rudders and variable pitch main propellers will also be contributory.

In the interests of both passenger comfort and freight security, the Trasmediterranea ferry has been fitted with Mitsubishi retractable fin stabilizers, while vessel movements during loading and unloading will be kept within certain criteria through the intervention of an automatic, Intering antiheeling system.

Murillo, named after the 17th century painter from Seville, is to be phased into the route network linking Spanish mainland Mediterranean ports with the Balearic Islands. The vessel will be the third, full-displacement RoRo passenger ferry newbuild to have been commissioned into the Balearic traffic since the summer of this year, when sisters Sorolla and Fortuny were introduced.

The latter, each arranged for 1,000-passengers and about 98 trailers plus 165 cars, were delivered by privatelyowned shipbuilder Hijos J.Barreras, in Vigo, and the IZAR yard at Puerto Real, respectively.

Although Murillo embodies a different design to that of the two new RoPax sisters, she similarly displays the requisite flexibility to enable use in different services with impunity.

Significant in a Balearics context is the vessel's design draft of 21 ft. (6.5 m).

compatible with the needs of working into the Menorcan port of Mahon. Sorolla and Fortuny have been assigned to the prime routes connecting Barcelona and Valencia with Paltria di Mallorca.

Compania Trasmediterranea sees a clear link between this year's improvement in revenues and economic performance and its investment in new ferries of higher standard and increased capacity. 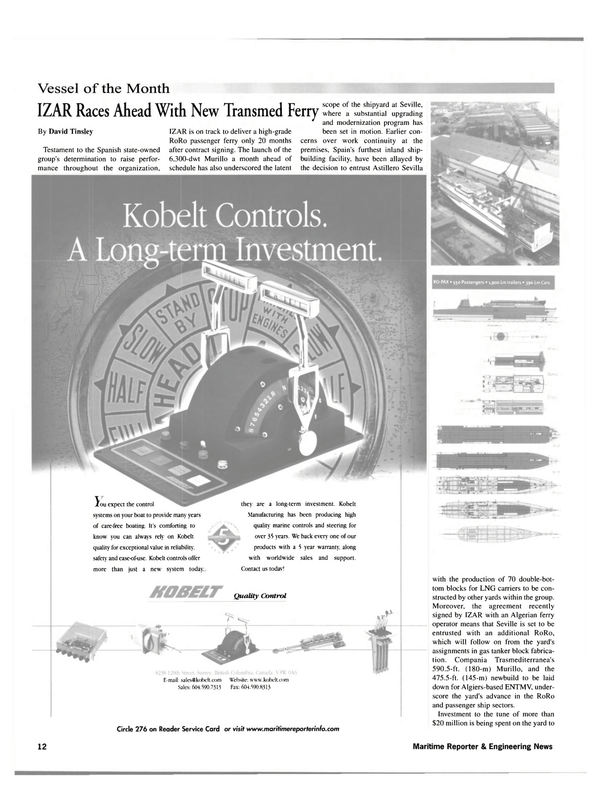