Deepwater One Delivers $ 2 . 3B Proposal to USCG

Deepwater One Team last month delivered a $2.3-biIlion proposal to the U.S. Coast Guard (USCG) for the design and development of an Integrated Deepwater System (IDS) that will help the Coast Guard meet vital offshore operational requirements into the 21st century. The team is led by Boeing and includes: European Aeronautic, Defense and Space (EADS); Construcciones Aeronauticas S.A. (CASA) of Madrid, Spain: Eurocopter, an EADS Company, of Marignane, France; John J.

The Deepwater program is a $12-billion, 20-year Coast Guard initiative to recapitalize the fleet of specialized ships, aircraft and sensors that operate in the deepwater mission environment, typically greater than 50 miles offshore Approximately 90 ships, 70 fixed wing, 130 rotor wing and 120 shore sites will be upgraded or replaced with an integrated system of surface, air, command and control, and logistics capabilities.

New ships, fixed wing aircraft and helicopters will be introduced into the fleet as the Coast Guard's operational tempo increases and deepwater mission requirements continue to evolve, particularly in the areas of maritime safety, law enforcement, environmental protection and national defense.

A five-year contract with renewable terms is expected to be awarded in June 2002, when one winner will be selected as prime and will have responsibility for implementation of the new IDS.

Boeing has responsibility for the system integration, information and communications systems and logistics.

CASA will concentrate on fixed aircraft and Eurocopter will supply rotary wing helicopters. JJMA will have responsibility for naval architecture and marine engineering. Northrop Grumman Ship Systems Avondale Operations will be the shipbuilder. 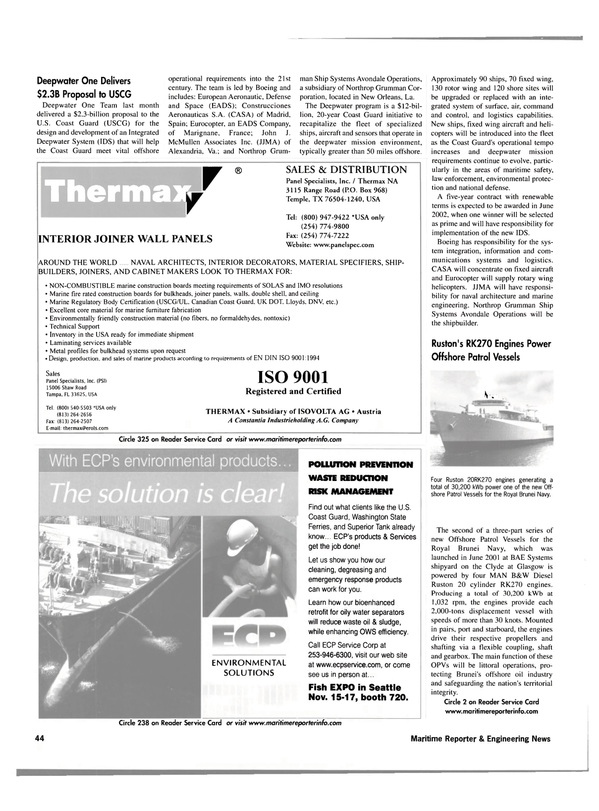 Read Deepwater One Delivers $ 2 . 3B Proposal to USCG in Pdf, Flash or Html5 edition of November 2001 Maritime Reporter