Newport News Shipbuilding: A City Within A Shipyard

For more than 100 years Newport News Shipbuilding has held the distinction as one of the largest shipyards in the Western Hemisphere. The 550-acre facility, which is situated on a two-mile stretch along the James River in Newport News, Va., is best described as "a city within a shipyard." MR/EN recently visited the yard to witness first hand how the worldfamous yard utilizes more than a century of know how and an unmatched wealth of technical capability to get ailing ships —from "shave and haircuts" to complicated reconstructions — in and out, on time and on budget.

By Regina R Ciardiello, senior editor For those who have never had the opportunity to visit one of the most prolific shipyards in the world — Newport News Shipbuilding — the most prominent feature is the company's 900-ton gantry crane, whose blue steel structure emblazoned with the company name across the front in block letters, is clearly visible from Interstate 664. The immense structure is one of the largest in any shipyard worldwide. The yard has long been a top choice for repair for the cruise industry, with an edge in this sector that is two fold. Aside from the fact that NNS is in close proximity to the cruise ship mecca of Miami, Fla., the yard also has the capacity and expertise to accommodate these floating cities with its Dry Dock No. 12, which at 2,300 x 250 ft. (701 x 76.2 m), is designated as the largest in the Western Hemisphere.

Drydock No. 12 served as a home for Carnival's Paradise, which underwent emergency repairs of its starboard podded propulsion unit in July 2000. The job was unique in that it was the first ever Azipod repair to be performed in the U.S. — a fact that was confirmed by Becky Stewart, director of Ship Repair at NNS. "The Paradise Azipod repair was the first overhaul of an Azipod propulsion motor in the U.S. A number of cruise ships being built in Europe have this new propulsion system. The work on Paradise will provide us with valuable knowledge for future electric drive work." Four months later. NNS' cruise exper- tise again came into play when it was tapped by Celebrity Cruises to take on the repair of its new gas turbine-pow- ered Millennium. The vessel, which experienced excessive vibration due to the slapping of water against its hull, arrived at NNS on November 18, 2000 for a quick, yet complete, fix in just three weeks.

The ability to get ships fixed quickly and correctly is particularly important to the cruise industry because of it tight itinerary schedule — extra time at the drydock results in lost revenue and passenger capacity. According to Stewart, the work on Millennium shaved off considerable amounts of time as a result of NNS' ability to lie out all the materials needed on the dock prior to the ship's arrival. Materials were produced on-site via the yard's computer aided design and manufacturing system and its massive 300,000 sq. ft. machine shop. "We can muster the resources to do anything." Stewart said. "We sometimes sub-contract work, such as painting and blasting, but the majority of the work is done inhouse." On the Forefront When MR/EN visited NNS in mid- October, it was not perceptible that the U.S. was in the midst of an economic downturn. The yard was abuzz with activity — both on the repair and new construction sides. On the repair front, two vessels — the 821 x 105.5 ft. (250 x 32.1 m) Carnival Victory and 893 x 116 ft. (272.1 x 35.3 m) SS PFC Eugene A.

Obregon - were in the yard for regulatory, as well as cosmetic work. Sitting in Dry Dock No. 12 for a 10-day availability was Victory, which was undergoing underwater hull blasting and painting, replacement of shaft seals, propeller and rudder inspections, open and inspection of sea valves and renewal of transitional frames in way of port and starboard stabilizers.

Situated in the yard's floating Dry Dock No. 1 was MSC prepositioning ship Obregon, which carries ammunition, supplies and military vehicles. The vessel, which is being chartered through Waterman Supply, has a 23-day availability at the yard for hull and deck preservation; ballast and cargo preservation; stern ramp preservation and overhaul; crane overhaul; boiler re-tubing; main and emergency generator maintenance; cargo crane and ramp testing; and regulatory body inspections via its classification society, ABS. The vessel will return to Jacksonville, Fla. upon its departure from NNS.

The ship, which is the second of a three-part repair contract granted to NNS by Waterman Supply, followed SS SGT Matej Kocak, which visited the yard in August. The final vessel of the series, SS Major Stephen W. Pless is expected to visit NNS sometime during December.

According to shipyard superintendent, Joe Adams, the rotor on the vessel's steam turbines will be replaced, as well as underwater hull and freeboard repainting. The vessel's helo and bridge decks will also be repainted. Adams added that since the vessel is more than 20 years old, regulatory work needs to be performed every two-to-three years — such as the cleaning and mucking out of its 12 ballast tanks, and blasting and painting of anchor chains. 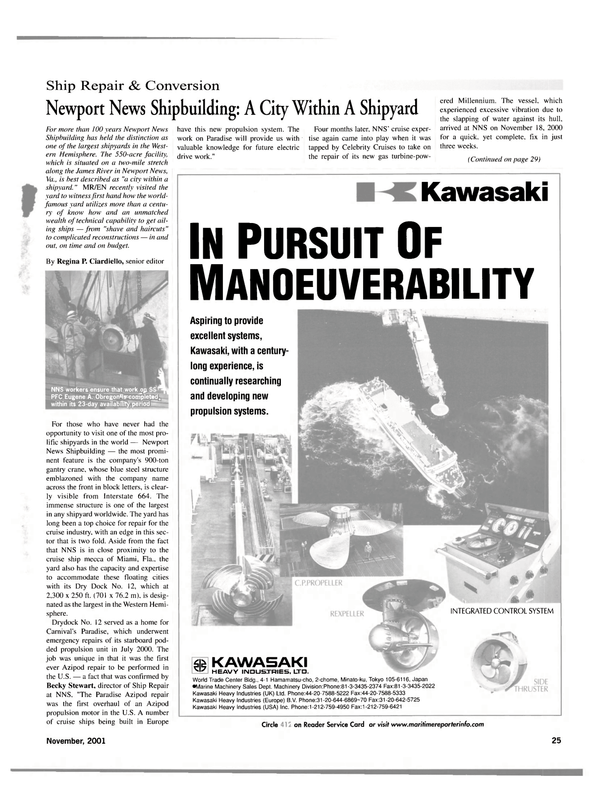 Read Newport News Shipbuilding: A City Within A Shipyard in Pdf, Flash or Html5 edition of November 2001 Maritime Reporter