Even before the September 11 terrorist attacks in New York City and Washington, D.C., the offshore market in the Gulf of Mexico had shown signs of weakening. However one shipyard — Atlantic Marine-Mobile — has reported a steady flow of work with the award of several, substantial offshore refurbishment contracts in recent months.

The shipyard in Mobile has a long history with the offshore market, but it notes that 2001 has been particularly busy. Semi-submersible and jack-up rigs have occupied the Mobile, Alabama facility throughout 2001. The influx of offshore work includes the following.

ENSCO International's jack-up rig ENSCO 68, arrived in Mobile in late March. The rig was in the yard for routine maintenance and class inspection, including the installation of a new top drive and upgraded drill floor to increase its drilling depth capacity. The job included about 85 tons of steel replacement, and the yard accomplished the work 10 days ahead of schedule.

ENSCO 94 immediately followed, and was scheduled to leave the yard in early October. It was in the yard for drill floor modifications to allow for the installation of a new derrick in order to increase its drilling depth capacity, as well. On this job. 85 tons of steel renewal was required. Atwood Oceanics' semi-submersible Atwood Hunter entered the yard in June for a major upgrade.

Hunter will have all new crew quarters — accommodating 120 people — installed, as well as a new 75-ton crane.

All derrick and drilling equipment will be upgraded along with a complete renewal of the piping systems, to accommodate the rig's capacity o drill a well depth up to 25,000 ft. This was a substantial steel job. involving the replacement of about 750 tons of steel.

Upon leaving the shipyard in October, hunter will begin a contract in the Egyptian territorial waters of the Mediterranean Sea for Burullus Gas- Company, drilling 11 wells. 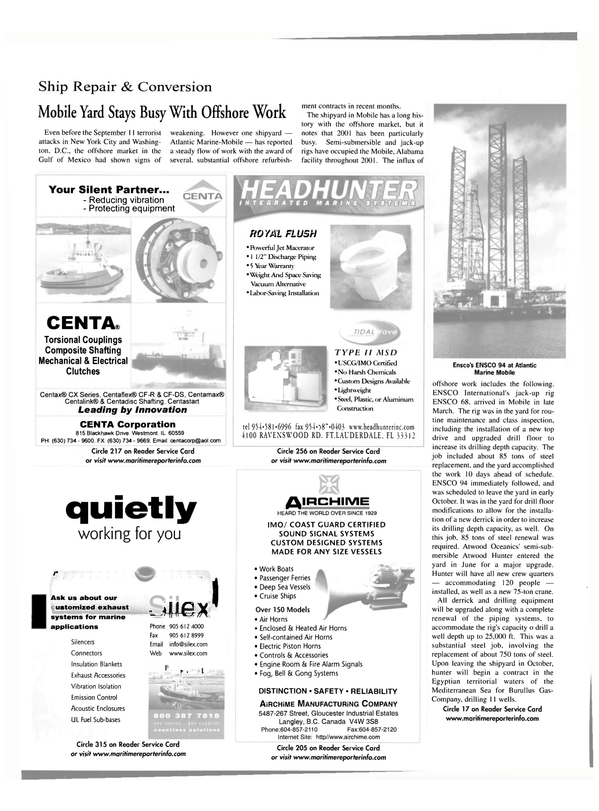