Towards the Intelligent Engine

Long-run performance of the system applied to the main engine of the 37,500-dwt parcel tanker Bow Cecil last fall will have a signal bearing on shipowners' future commercial uptake of the technology, as encapsulated in MAN B&W's ME diesel program. In the meantime, the engineers aboard Bow Cecil have found the electronic system to be a valuable tool in optimizing combustion performance, facilitating engine tuning and adjustments in accordance with changing operating conditions and with regularly experienced, marked variations in bunker properties. The practical goal is to achieve the best combustion at every stage in the multiport, tramp-like trading profile that is the lot of the chemicals parcel carrier.

The constant and manifold changes in load and running speed associated with a trading pattern entailing frequent port calls and maneuvering provide a stern test of functionality, efficiency and dependability, and wholesale electronic operation under such circumstances is said to be meeting expectations. The electronic arrangements have also facilitated tuning to the widely differing ignition properties of the heavy fuel oil bunkered by the ship at seven points around the world. Furthermore, the system is regarded as an effective tool with which to meet tough criteria in certain ports on smoke emissions.

At the time of MR/EN's recent visit to the vessel in Rotterdam, during the course of a North European cargo discharge and loading pattern, the vessel's adapted main engine had logged nearly 4.000 running hours in full electronic mode. It is as yet too early to judge or quantify the overall impact of the flexible control methodology on fuel consumption. For sure, that will be a key determinant of the system's future selection by shipowners at large, along with considerations of rela tive maintenance costs and the requisite dependability.

Under the agreement between Odfjell and MAN B&W. the systems and engine proper will be scrutinized over a period of 10.000 service hours, to verify the effectiveness and reliability of the concept.

At the end of that time, Odtjell will determine whether to run the plant continuously under electronically- controlled timing of fuel injection, exhaust valves, starting valves and cylinder lubrication, or to revert to conventional actuation using the retained camshaft. Well before then, since it will likely be the best part of another year before the engine has accumulated 10.000 hours in electronic control configuration, the Norwegian firm may decide whether or not to have a current newbuild parcel tanker equipped with a wholesale, camshaft-less ME engine. The current application of the concept in a demanding service environment at sea is the vital precursor to any move towards instilling true 'intelligence' in a low-speed propulsion diesel, whereby an engine would self-adjust and self-protect to changing conditions, and would thereby warrant and justify the designation 'Intelligent Engine'.

For its part, MAN B&W believes that the IE concept offers the potential for reduced overall fuel consumption, because of the possibility to optimize fuel injection characteristics at many different load conditions, whereas a conventional engine is optimized for the guarantee load, typically at 90- 100 percent maximum continuous rating (mcr).

The designer and licensor also anticipates advantages in operational safety and flexibility, not least for slow running, while the ability to set up the engine to meet varying exhaust gas emission limits arising from local controls is likely to become an increasingly important factor in favor of the IE system and ME engine versions.

Bow Cecil is a modern tanker, having been completed in 1998 by west Norwegian builder Kvaerner Floro, now Kleven Floro. The vessel's 14,200-bhp (11,520-kW) 6L60MC engine had been delivered with an ordinary camshaft system, but also prepared for fitting with the necessary IE elements. The electronic fuel injection and exhaust valve control systems are fitted on the engine's upper gallery, in parallel with the conventional camshaft.

Since the initial conversion to electronic format in the course of the vessel's trading operations in South-East Asia in November 2000, the installation has been switched several times back and forth between electronic and camshaft operation.

Crew familiarity is now such that changeover can be accomplished in about one hour 40 minutes, possibly taking around 30 minutes longer when personnel less conversant with the system are involved. Since March this year, the vessel has been run continuously with her engine under electronic control, representing an unbroken service period accounting for 3,180 of the 3,960 hours clocked up at the time of MR/EN's visit. 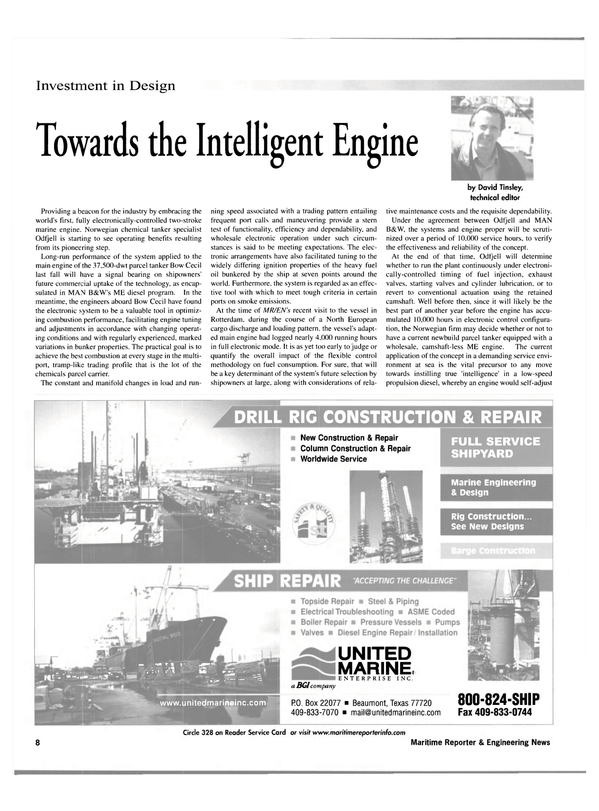 Read Towards the Intelligent Engine in Pdf, Flash or Html5 edition of November 2001 Maritime Reporter