Changes in the international political and economic climate will add new urgency to the theme of the Shiprepair & Conversion 2001 conference in London in November — gaining the edge in a competitive global industry.

Marking the 10th anniversary of the event, the conference takes place alongside the industry's leading exhibition in the Grand Hall. Olympia, on November 28-29.

A new pick-and-mix booking format offers cut-price entry to one or more of the four morning and afternoon sessions — giving delegates, exhibitors and visitors more scope to take part in both the conference and trade show, which will feature a record 360 exhibitors.

In a further innovation from organizers Lloyd's List Events, a pre-conference workshop on November 27 — held in conjunction with the annual meetings of the trade associations AWES and SSA — will focus on negotiating newbuild, conversion and repair contracts.

In the main conference, the impact of world events will be assessed by speakers and in open debate at a time when the industry is already facing up to the demands of legislation, rationalization, modernization, diversification and competition.

The review includes a comparison of global repair yard capacity and demand: a paper on modern shipyard trends by David Ring, chief executive of A&P Holdings; and an appraisal by ABS Europe assistant chief surveyor Joseph Riva of technical and legislative changes including the phasing out of single hull tankers and tougher survey regimes for older vessels.

There will also be a study of the causes and consequences of yard consolidation by MRC Business Information senior analysts Mark Williams and Jenny Tok, who observes.

Day one of Shiprepair & Conversion closes with the event's prime networking opportunity, a Lloyd's Register cocktail reception open to all delegates and exhibitors.

The session and conference ends with a debate on critical industry issues including the ramifications of the global political and economic outlook.

Together with feedback from earlier sessions, other topics earmarked for discussion include the impact of Port State Control and whether tough new quality standards mean more repair work or increased scrapping.

The November 27 pre-conference workshop on contract negotiation is being held at London's Commonwealth Institute in Kensington High Street.

Examination of the key points, pitfalls and differences involved in newbuilding, repair and conversion contracts will be underlined by a mock negotiation.

Full exhibition, conference and workshop details are on the event website — www.shiprepairex.com — which includes visitor and delegate registration. 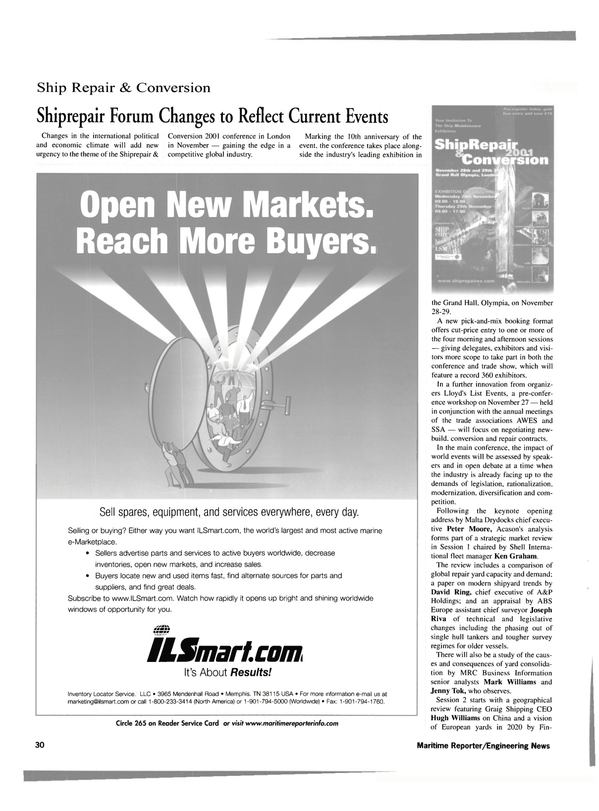