Where Is the All-Electric Navy?

"There is a powerful agent, responsive, quick, and easy to use, pliable enough to meet all our needs on board. It does everything. It supplies light and heat for the ship and is the very soul of our mechanical equipment. That agent is electricity." — Captain Nemo in 20,000 Leagues Under the Sea Jules Verne's classic novel first appeared in 1869.

Today, the Navy is standing at the threshold of remarkable capabilities that Jules Verne could barely imagine- a "revolution at sea" akin to the change from sail to steam and from oil-fired plants to nuclear power. But the process for the Navy has not been easy. As a Navy integrated electric drive (IED) insider told me privately: "Innovation is one thing; if you're asking us to change the way we do business, that's something else entirely." And as theoretical physicist Max Planck understood: "An important scientific innovation rarely makes its way by gradually winning over and converting its opponents; it rarely happens that Saul becomes Paul. What does happen is that its opponents gradually die out and that the growing generation is familiarized with the idea from the beginning." If the focus is on the post-2030 era, when most of today's fleet will be scrapped or sold to allies, only dim outlines of the future Navy are visible. If the focal point is moved closer, to, say, 2015. then about 65 percent of tomorrow's fleet is either under construction or in service today. Given this reality-and the engineering difficulties and costs of back-fitting IED and integrated power systems (IPS) to ships in service or under construction- near-term prospects for widespread introduction of electric technologies and systems are not promising.

Nonetheless, there are many targets of opportunity: Zumwalt (DD-21)-class land-attack destroyers (pictured above); later USS Virginia (SSN-774)-class submarines; LHA(R) amphibious ships; next-generation CVNX aircraft carriers: JCC(X) joint command and control ships: and the Coast Guard's Deepwater national security cutters. These opportunities are, however, clouded by the numerous top-down strategy and program reviews and transformation panels set up by Secretary of Defense Donald Rumsfeld and the quadrennial defense review process. The announcement earlier this year that the Navy was to hold completion of the source selection for DD-21 "in abeyance, pending the results of these reviews" could have a ripple effect on plans for IED and IPS in other ships.

Changing Focus Is Essential In assessing the future effect of IED and IPS. the Navy must look well beyond propulsion and naval architecture benefits. Captain "Corky" Graham — the "archangel" of IED — talked about breaking the tyranny of the propulsion shaft. He outlined key benefits of electric drive: flexibility of internal arrangements, improved sea keeping through optimized weight distribution, increased redundancies and survivability, and better fuel efficiencies. As the USS Arleigh Burke (DDG-51) design manager, he pushed the advanced integrated electric propulsion plant; as commanding officer of Carderock Naval Ship Research and Development Center, he believed electric drive was one of several "technology clusters" that needed to be pursued.

That was 20 years ago-yet electric drive has not been installed in any major inservice or in-production Navy warship.

Meanwhile, perhaps mirroring the Navy's mid- to late-19th-century experience, other naval powers are investigating the possibilities. For example, the Royal Navy is installing electric drive in its Albion-class amphibious warships and has selected the advanced WR-21 intercooled and recuperative gas turbine IED, and IPS for its next-generation Type 45 destroyer.

As long as the focus remains on the hull. mechanical, and electrical (HM&E) aspects of specific ships, success will elude the Navy. But if it articulates what an all-electric Navy could be and puts programs and resources in place-for various future technologies and systems as well as IED and IPSsuccess will be much more likely. In short, it must embrace IED and IPS as catalysts for the wide-ranging, "leapahead" warfighting capabilities that President George W. Bush and his advisors seek for the Navy.

In January 2000, then-Navy Secretary Richard Danzig announced that the Zumwalt destroyers would be built with IED and IPS. A year earlier, he endorsed a Naval Sea Systems Command "Common Integrated Electric Drive" report calling for a corporate approach to ensure that technologies developed for one platform type can be applied to other platforms. "Changes in propulsion systems are fundamental and of fundamental importance," Secretary Danzig noted in his DD-21 announcement. "We are moving forward to embrace a technology- electric drive technology-and the integrated power system that comes with it, to drive Navy ships." Thus, a lot hangs on the future of the DD-21.

To be sure, there remain hotbedsmaybe "rice bowls" is more apt-of interest in IED and IPS in and out of the Navy. Some are studying other technologies and systems, including hightemperature superconducting motors, new prime movers-such as advanced nuclear plants and next-generation gas turbines such as the WR-21 engine in testing-and direct-electric conversion from nuclear power. Others are concentrating on "downstream" technologies and systems for weapons, sensors, and passive and active defenses. The Office of Naval Research (ONR) has established a "swamp works" that is examining electric warships. Also, an ONRsponsored 13th future naval capabilities area for electric warships and combat vehicles has been put in place. The Chief of Naval Research, Rear Admiral Jay Cohen, has made the all-electric ship his top priority.

However, looking in from outside, the Navy's approach seems fragmented and ill coordinated, and it remains underfunded despite more than $100 million spent on IED and IPS technologies and systems over the past decade or so (mostly by industry and academia). That is small change compared to the billions that have been allocated to weapons, sensors, command-and-control, and other systems. During the past ten years of declining Navy research-and-development funding generally, the fraction going to HM&E systems has declined.

In August 2000, Senator Trent Lott suggested that the Navy establish a new high-level office to oversee electric drive in the fleet, as had been done with nuclear power. His idea was rejected by the Navy, but it remains valid. In this vein, a July 2000 Congressional Research Service report concluded that "policy-makers might consider electric drive as not simply a proposal but a broader technology area that might require longer-term management and oversight and a series of research, development and procurement decisions stretching over the course of several years." The Navy's nuclear and Aegis programs provide good lessons (and interesting leadership and management contrasts) for meeting the challenges of technological innovation and change that electric drive presents. Clearly, a passionate champion and excellent leadership are needed-and total control over all aspects of the project is critical.

Although the effect will vary among ship types, there will be a reallocation to combat systems (or other payload requirements) on the order of 25 percent of an individual ship's internal volume that would have been devoted to propulsion.

• IED systems will have minimal vibration and acoustic and magnetic signatures, good shock resistance, and excellent economies of operation throughout all speed regimes — a particular concern for gas-turbine prime movers.

• IPS and IED will facilitate the implementation of modular architecture and standardized interfaces throughout the fleet, and will enhance the efficiency and effectiveness of ship design and construction.

• Development of small-, medium-, and large-application modular components for high-speed electric motors and integrated propulsors for all ship applications in a range of standard power generation modules will increase commonality throughout the fleet, regardless of prime movers.

• All ship's power will be available in the form of electricity for shipboard requirements. IPS will enable the instantaneous power switching and distribution among propulsion, ship service, and combat, weapon, and sensor systems without loss of loads or degradation in quality of power.

• All elements of a warship's signaturesacoustic, infrared, radar cross section, magnetic, visual-will be reduced, with much of that decrease attributed to IED systems.

• Electromagnetic aircraft launch and recovery systems incorporated in design of the CVNX-class aircraft carrier will be much more reliable and effective than legacy steam catapults and arresting gear. Steam team will all but disappear in surface ships and-with future direct-electric conversion nuclear plants-in submarines as well.

• Introduction of electrothermal chemical weapons and rail and coil guns will be facilitated.

• Electromagnetic and laser shields will be installed in surface platforms. A possible modification of this system will offer advantages as a "cloaking device" to shield naval forces from surveillance and targeting systems-the ultimate stealthy warship.

• Acquisition and fleetwide operational costs will be reduced significantly because of common components and systems. A total cost reduction of at least 20 percent will be realized throughout the fleet.

• Fossil fuel savings will be even more impressive-as much as 25-30 percent, depending on ship type. Industry data show that a DD-21 outfitted with the advanced WR-21 gas turbine and IPS and IED systems will on average cost approximately $80 million less per ship for fuel throughout its service life than today's Arleigh Burke-class destroyer.

(Multiplied by the 32 DD-21s in the Navy's plan, the life-cycle savings of some $2.56 billion would be enough to add three ships to the program.) • Electrical components will be much more reliable than the mechanical and hydraulic components they replace and they will be more easily instrumented, thus advancing automation and contributing to crew reduction.

• Training and maintenance will be facilitated and strengthened on a fleetwide basis. It will be easier to assign people with critical technical and engineering skills to all ship types, with little need for refresher training. Maintenance will be enhanced because of broad commonality among electronic technologies and components.

Charting a Course Hard on the heels of 20,000 Leagues, Jules Verne wrote Journey to the Moon, also published in 1869. A century later, Neil Armstrong walked on the moon, taking that giant leap for mankind. It is well past time for Verne's vision of an "all-electric" warship to be realized. If the electric-drive community in the Navy, industry, and academia is to be successful in achieving this vision, its focus must be not only on fielding electric- drive warships, but more broadly on what an all-electric Navy means for the nation and its naval forces. Electric drive and integrated power systems are vital warfighting elements of this future fleet-not simply HM&E programs competing against "sexier" weapon and sensor systems for scarce dollars, people, and time. The United States has the skilled people to do the job. Naval laboratories and engineering centers of excellence are without equal. Here and abroad, civilian-commercial industrial bases for advanced electric generators and motors, power-control electronics, solid-state rectifiers and inverters, and high-power switches stand ready to make the necessary leap to military applications-if an adequate return on investment can be garnered. Opponents finally seem to be dying out. A growing generation, familiar with ideas of IED and IPS from the beginning, is assuming positions of authority and responsibility.

Integrated power and electric drive certainly certainly can be catalysts for other "leapahead" technologies that the Bush administration desires. But still the Navy needs a champion. Where are the David Taylors, Hyman Rickovers, Bill Raborns, and Wayne Meyers of the all-electric Navy? 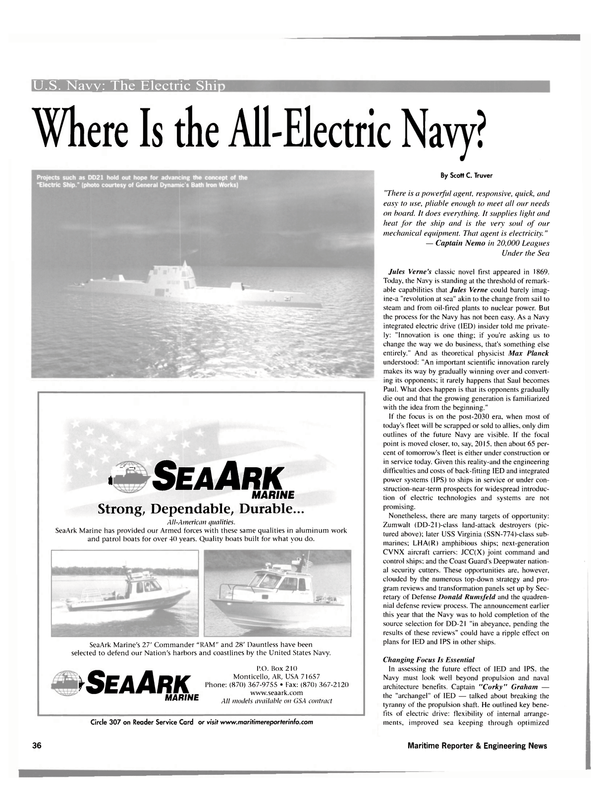 Read Where Is the All-Electric Navy? in Pdf, Flash or Html5 edition of November 2001 Maritime Reporter