On October 18, 2001, the Naval Sea Systems Command (NAVSEA) awarded of a $406.9 million contract for the detailed design and construction of the lead ship of the T-AKE Auxiliary Cargo and Ammunition Class to National Steel and Shipbuilding Company (NASSCO) of San Diego, CA. With the excercising of a contract option of $301.6 million for the follow ship, the cumulative deal is more than $708 million for NASSCO.

The T-AKE Class was designated the "Lewis and Clark" to honor the two explorers who led a visionary project that was to become one of American history's greatest adventure stories. The first ship will be Lewis and Clark (TAKE 1) and the second ship will be Sacagawea (T-AKE 2).

The ships are designed to provide a two-product shuttle ship replacement for the aging Combat Store (AFS) and Ammunition (AE) shuttle tleet ships.

The vessels will be built almost entirely to commercial ship standards, manned by Government civilian mariners, and operated by the Military Sealift Command.

The ships will have the capacity to handle ammunition and combat stores-including dry, frozen and chilled products, spare parts and consumables.

Designed to operate independently for extended periods at sea while providing replenishment services to U.S. and NATO ships, the Lewis and Clark class ships will directly contribute to the ability of the Navy to maintain a forward presence. These ships will provide logistic lift from sources of supply either in port or at sea from specially equipped merchant ships. They will transfer this cargo (ammunition; food; limited quantities of fuel; repair parts; ship store items and expendable supplies and material) to station ships and other naval warfare forces at sea. As a secondary mission, these ships may be required to operate in concert with a TAO class ship as a substitute station ship to provide direct logistics support to the ships within a battle group. The T-AO class ship, which carries liquid cargo, and the T-AKE class ship, which carries dry cargo, when operating together in lieu of a station ship, will provide the battle group with products equivalent to an AOE 1/6 class (fast combat support ship).

The lead ship and first follow ship are scheduled for delivery in March 2005 and September 2005. The contract includes options for up to 12 ships.

forming search and rescue, pollution control, security, and law enforcement duties from its homeport of Cheboygan.

The vessel will be built at the company's Marinette Marine shipyard, and is expected to take more than three years to complete. The new ice breaker, which will be delivered in 2005. 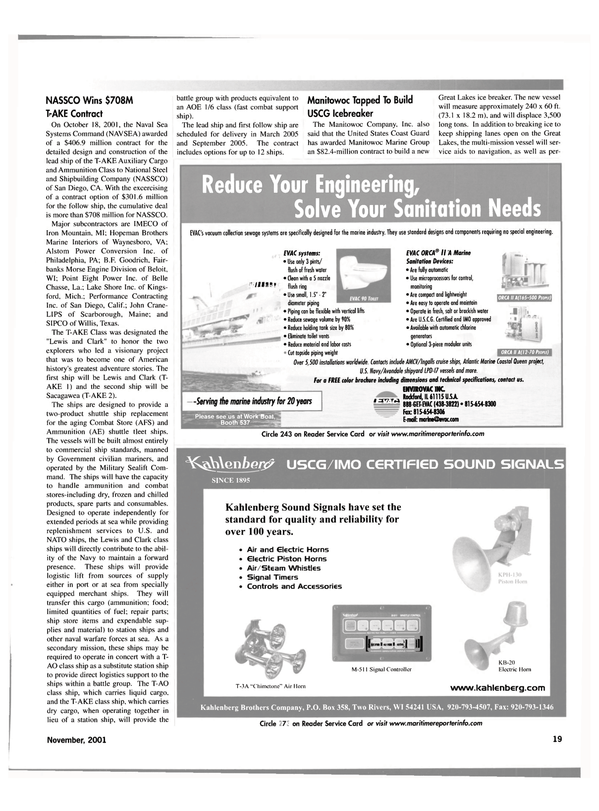