Lukoil Marine Lubricants reports that it has expanded its sales in the 2012 business year by 74% to around $200m. Established in 2008, the subsidiary of Russian oil group Lukoil continues to grow rapidly. As Lukoil Marine Lubricants CEO Victor Zhuravskiy recently said, “Totally supported by our parent company, we have succeeded in developing an efficient, global enterprise that is currently leading the sector in terms of growth.”

As for operative and technical expertise, since entering into the global lubricating oil business Lukoil has relied on its Hamburg site. “Here we are in close proximity to our customers, because Germany, and Hamburg in particular, remains one of the world’s most important shipping hubs. The combination of Russian raw materials, worldwide leading additive technology and German engineering has become a success factor for us.” To round off the connection to Hamburg, shipping line Hapag-Lloyd’s Hamburg Express also uses Lukoil products for lubrication.
Stefan Claussen, technical and marketing director at the Lukoil Marine Lubricants Hamburg office, sees two factors as being the main reasons for success: “We are constantly expanding our global network. In addition, we were the first company to recognize the requirement for new, high alkaline cylinder lubrication oil and began development at an early stage.”

The practice today of reducing ship speeds (slow steaming) can significantly reduce fuel consumption costs. However, the constant partial and low burdening of a ship‘s engines requires high alkaline cylinder lubrication oils with a base number of at least 70 mg KOH/g – a measurement of the capability for neutralizing acidic residue that forms during the combustion of heavy oil. The performance, consumption and emissions of ship engines have been further optimized in recent years, resulting in ultra-long-stroke engines that are operated at even lower rpms.

Lukoil consequently recommends the use of cylinder lubrication oils with base numbers of 70 and 100 mg KOH/g to its customers. The ‘flagship’ product amongst these is the newly developed LUKOIL NAVIGO 100 MCL. “In cooperation with the engine manufacturers MAN and Wärtsilä, we have demonstrated the new oil’s performance capability on a variety of ship engines,” said Claussen. “As an example, the wear rate was improved and cylinder oil consumption reduced in a state-of-the-art MAN S80ME-C Mk 9.2.” 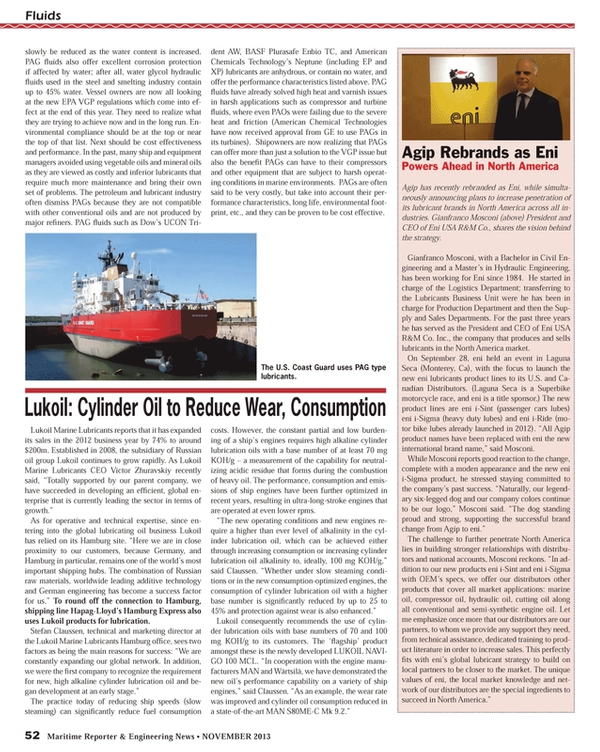