Understanding Trends & Tendencies in the Gulf of Guinea

Gulf of Guinea piracy presents a radically different picture compared with Somali piracy. Since decades it has been a kaleidoscopic mix of short duration hijackings, militant disruptions, kidnappings, robberies and thefts, depending on the location and the setting. It was not until recently, however, that piracy in the region attracted significant international media attention due to the increase in hijackings of product tankers in the region.
It is uncertain when this phenomenon started exactly, but the hijacking of the Valle Di Cordoba on December 24, 2010 is generally held to be the first successful short duration hijacking in the Gulf of Guinea, where the hijackers had targeted the ship specifically for its cargo of gasoil.
They stole approximately 5,000 metric tonnes of the cargo and disappeared again within a span of less than 72 hours. It provided a template for at least 87 further attacks until the end of August 2013, of which 34 culminated in hijackings, although not all were successful in the theft of cargo. More than 117,000 metric tonnes of refined petroleum products – gasoil and gasoline – with a market value in excess of $100 m have been stolen from product tankers since 2010.

Myths and Risks
It is important to highlight that the tanker hijackings are for the most part closely linked to organised crime in Nigeria, which is in turn deeply embedded in that country’s business and political culture. Cargoes are targeted by influential businessmen, politicians and military officers who provide buyers as well as political and security cover for the operation. Nigerian product importers (of which there are now 140 compared to just six in the late 1990s), local agents, banks and charterers provide target information. It is not a perfect system and leaves some room for opportunism. Nigerian sources suggest that about 20% of the attacks against tankers are planned by rank-and-file pirates, rather than by criminal “business consortia”. All these groups have also been very adaptable over the last three years in moving their operations from where Gulf of Guinea states were attempting to increase security measures to stem attacks outside their ports.
The changeable nature of organised crime makes it difficult to predict. Nonetheless, this has not prevented a number of myths from developing in the security industry, particularly where tanker hijackings have been conflated with the wider occurrence of kidnap-for-ransom attacks against offshore targets. For a long time, for example, pundits claimed attacks were moving farther out to sea and forecast a Somali piracy situation. This appeared plausible when on October 2, 2012 a chemical tanker was attacked 136 nm from Cotonou. This obscured the underlying trend that attacks were, in fact, moving closer to shore as more opportunistic attackers with less target information entered the fray. Although attacks did take place as far as 500 nm from Nigeria, the mean average distance from the shore of all tanker attacks between 2010 and 2013 is only 22 nm, with four out of five attacks occurring closer than 40 nm from the shore in 2013. This distance can easily be covered by unsupported speedboats.
Suggestions have also been made that daytime attacks have become more frequent. Closer examination shows, however, that tanker hijackings are overwhelmingly a night-time phenomenon, except off the Niger Delta. Here, attacks follow the local pattern, which has always included an equal distribution of day and night-time attacks. An increasing number of attacks against tankers outside the Niger Delta (due to lower naval maritime situational awareness) have thus created the illusion of a change in the region-wide attacker modus operandi favouring more daytime attacks.
It has often been asserted that Nigerian piracy is more violent than in other regions, such as Somalia, and that it is becoming increasingly more violent. This is an emotionally charged topic. Hijackings are highly traumatic for many seafarers, especially in the attacks against local and oil & gas offshore shipping where casual and excessive violence remains very pronounced in Nigeria. The same level of violence is not observable in the context of the tanker hijackings. Although the number of weapons discharges outside or inside the ship has doubled since 2010 the number of casualties has remained stable and at a low level. Most crew injuries are sustained from beatings by the captors and these are not significantly at variance to the norm.

Inadequate Countermeasures
Following a surge of attacks on tankers off Cotonou in 2011, attacks against product tankers have now stabilised at about two to three per month, encompassing countries such as Ivory Coast, Togo, Benin and Gabon. West African countries’ demand for imported petroleum products and the impact that static ship-to-ship operations have on the security posture of vessels ensure that the business opportunities for the criminals remain extant for the foreseeable future.
The success of these attacks is also a result of inadequate preparedness by ships and ship operators. Charter parties which disregard the risks of prolonged exposure to potentially criminal business partners, lax information security, lack of vigilance and complacency have made the job easier for the hijackers. Out of 10 exemplary cases that were researched in depth by Risk Intelligence, five ships did not observe the attack until the attackers were on the bridge. Some of those vessels ostensibly had security measures equivalent to ISPS Code level 2 in place or had otherwise indicated that they had posted additional lookouts. Consequently, any other security measures, such as citadels (where ships had any), SSAS or naval response failed to have any impact on preventing the hijacking.
A typical shortcoming is the lack of region-specific guidance. While there is a half-hearted attempt to supplement BMP4 with Gulf of Guinea guidance, ISPS Code mandated measures are usually far too generic to address the threat. For example, several ships had deck patrols on a fully lit deck – as per their ship security plan requirements – with the result that the deck patrol had no visibility beyond the illuminated deck area and was in turn backlit by the deck light. The attackers ambushed the deck patrols before they were able to raise an alert.
This basic failure in understanding how security measures need to be adapted to local conditions is just one of many. Specific to the region, furthermore, is the primary focus in the Gulf of Guinea on avoidance and information security. While there are limits as to how much information that is vital for conducting business can be compartmentalised, target denial by the ship is a powerful instrument that can be deployed. Many elements can be included in the charter party without becoming commercially unviable for either side.

Conclusion
The tanker hijackings will remain a feature of Nigerian piracy for the foreseeable future. Like other forms of maritime crime in the area, it may become more cyclical as more opportunistic attacks occur, but the better-organised groups become more judicious in their targeting. Organised crime may come under pressure as regional governments, including the Nigerian government, will have to demonstrate their intent to suppress maritime crime – at least until the matter is out of the headlines of the international press. In the meantime, the use of crewmembers as human shields, as was the case aboard the French-flagged tanker ADOUR in June 2013, may provide the potential hijackers with a means to safeguard against too-robust naval intervention by local and foreign navies.
Despite cyclical changes, tanker operators still need to adapt some of their security procedures or run the risk of their vessels being hijacked. The consequences do not seem to be great at first glance – especially when compared with Somali piracy. But a number of ship owners have found themselves in court being sued by their charterers for the value of the stolen cargo on the grounds of having paid insufficient attention to the risk assessment and lack of implementation of effective security measures in the Gulf of Guinea.

About the Author
Dirk Steffen is the Director Maritime Security at Denmark-based Risk Intelligence. He has been involved in Nigerian maritime and oil and gas offshore security since 2003. 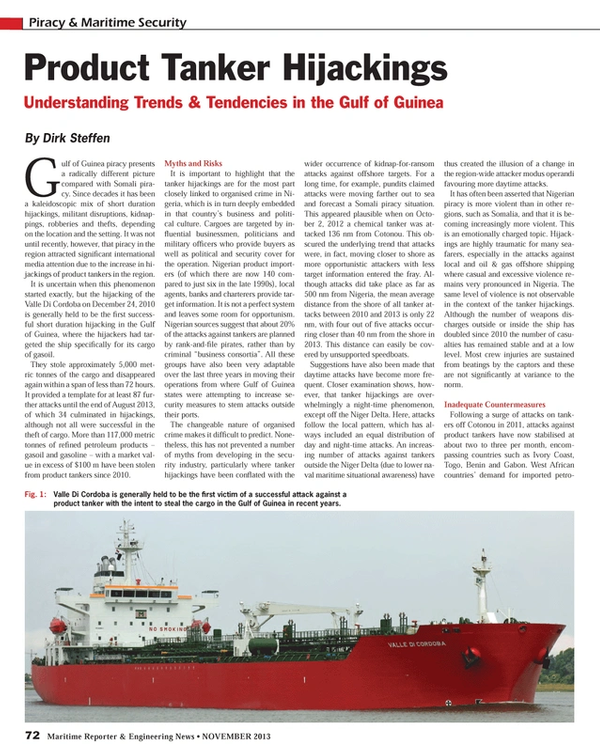