Brazil’s Libra pre-salt field, in Block SS-AUP1 in the Santos Basin, with estimated recoverable oil volumes of 8-12 billion barrels of oil equivalent (BOE) and in place volumes of between 25-40 billion BOE, was the country’s first pre-salt field to be auctioned.

The rules governing this historical auction have been shunned by important super-majors such as Exxon Mobil, Chevron and BP and also by major players such as the BG Group and Statoil. Many industry analysts were surprised that state-owned players from China, India and Malaysia dominated the list of companies that have agreed to the controversial terms imposed by the Brazilian government, through its National Petroleum Agency (ANP). Magda Chambriard, head of ANP, said that she had expected “more than 40 companies to bid for Libra,” expressing surprise at having only about a quarter that interest actually materializing. She may well have been surprised, but it is highly doubtful that the policy making nucleus in Brazil’s government was in any way surprised, as the state policy is to maintain tight control over pre-salt E&P. The new rules being implemented for this auction, such as Petrobras being the sole operator of the field and having a minimum 30% stake in any consortium, along with the highly criticized decision to create another state-owned company, Pré-sal Petroleo S.A. (PPSA), to act as manager of the winning consortium without imputing capital and having 50% vote in the Operational Committee’s deliberations, along with veto rights, are a reflection of the government’s policy.

Local industry analysts, who asked to remain unnamed, maintain that these and other new rules such as the production-sharing scheme were designed to attract other state-owned players, in detriment to the international super-major players, which are mostly private companies. The reasons for this preference is that these state-owned players participating in the auction, having significantly less, if any, experience in operating deepwater pre-salt fields, are therefore more agreeable to Petrobras’ operational control and the significant fact that these state-owned players are more interested in obtaining the physical oil than in the profits from oil sales because they need the oil for their own national development.

Eleven companies agreed to the auction terms and paid the roughly $1 million participation fee, after which they received the data package concerning the Libra field. Of these 11 companies, seven can be considered super-major players because of their market value, according to Bloomberg/PFC Energy estimates as of December 31, 2012. The fact that they paid the participation fee does not necessarily confirm that they would definitely participate in the auction, and the payment fee was compulsory and individual to each company, even those wishing to submit bids through a consortium. Therefore, some of the companies listed could choose to forfeit the fee and not participate in the auction, and one did just that; Repsol pulled out of the auction at the last moment. Additionally, Mitsui and Petronas failed to deposit financial guarantees, thus withdrawing participation rights. With the high investments involved, which include EWTs and other field development costs, along with around $7.5 billion as bonus on signing the 35 year long, nonrenewable E&P contract, virtually guaranteed that the companies involved will form consortiums, with no company competing individually. The ANP has estimated that it could take as much as $183 billion to develop the Libra field.

When the rules were changed in 2010, many local and international oil industry leaders and analysts expressed concern that the production-sharing model would reduce investment interest in Brazil’s pre-salt provinces, which include areas in the Santos, Campos and Espirito Santo Basins. After the rules were confirmed for the Libra auction, more than 200 requests for changes were made and turned down by the ANP, who said the area’s size and potential meant that the government could charge almost anything it wanted for the rights. “Libra is beyond any possible comparison nowadays to other fields,” said Magda Chambriard during a global road show to promote the auction.

“If companies participate, it is because they see potential value. This is the biggest auction in 30-40 years around the globe.”

Brazil’s government expects to receive around $300 billion in royalties and other taxes from Libra over 30 years.
Oil rights in the rest for Brazil’s post-salt plays will continue to be sold on a concession basis, where oil companies own all the oil, but pay royalties of at least 10% on production. João Carlos França, President of the Brazilian Petroleum Institute (IBP) had this to say: “What surprised me was Exxon not participating. But every company has its strategy. Libra is very large; it demands high investments, with high risk and many regulatory uncertainties in the sharing model. It’s not known how the PPSA will perform managing the fields. It’s a great doubt.”
The PPSA organization may be viewed with skepticism and considered a risk by some, but the fact is that the company was created specifically to manage the pre-salt resources efficiently. The risk is still there, yet by choosing a CEO with a technical background instead of a political appointee, President Dilma Rouseff showed how seriously the PPSA is being taken by the Brazilian government. This is an important indicator that the government expects the PPSA to keep a tight managerial and supervisory control over the winning consortium to guarantee that the oil costs (the costs related to oil production) do not skyrocket, which could adversely affect the amount of oil delivered to Brazil and the winning bidders.

Local content requirements for equipment and services also pose serious concerns to major players. According to executives from major oil companies operating in Brazil, there is a growing fear that local industry will not be able to fulfill demands and meet deadlines, thus slowing down Libra’s development and possibly even delaying Libra’s production startup, which would also delay any profit gains. By contract, the minimum local content during the exploratory phase is set at 37%. During the EWT, this drops to 15%. For the development phase modules to begin by 2021, local content requirements reach 55%, and for development phase modules beginning in 2022 this increases to 59%. President Dilma Rouseff announced in September, that the development of the Libra pre-salt field would require between 16-18 new rigs or FPSOs to reach the goal of producing 1 million BOE per day. This goal has since been raised to 1.4 million BOE per day. Between 60-90 support vessels are also forecast to be required. This will be a major boost to the already thriving Brazilian shipbuilding industry which has reached a workforce of roughly 70,000, up from an all-time low of only 2,000 workers at the turn of the century.
The President of PPSA will be Oswaldo Antunes Pedrosa Jr. He is a 63 year old engineer with a PhD from Stanford. Pedrosa worked for 30 years in Petrobras, where incidentally, he was chief of current Petrobras President, Graça Foster. After retiring from Petrobras he joined the ANP at its inception in 1998. Since 2010 he has been working with HRT O&G as Executive Director of the Polvo field, where HRT hold a 60% stake. “There needs to be a convergence of interests between the PPSA and its partners, including Petrobras as pre-salt operator.” Pedrosa said. “We also have to supervise the operator in order to guarantee that the main objectives of a company of this nature are reached. The main objective is to maximize the results for both the partners and the state. Now, during our operation, there will always be managerial conditions and procedures, which will allow the PPSA to reach high level agreements with the pre-salt operator, which is Petrobras.”

Libra Auction Result
With the first pre-salt auction scheduled to take place at a hotel located in Barra Beach on the west side of Rio de Janeiro during a commercial holiday on Monday, October 21, the Brazilian government made comprehensive security plans to impede demonstrators from reaching the event venue. Worker and teacher demonstrations have been commonplace in Brazil during the last few years, although they usually end in some form of confrontation with security forces. Before the bidding round started, there were demonstrations by oil workers and others totaling around one hundred people, about 500 meters from the venue, where the security cordon was placed. There were also confrontations with some demonstrators, and some of the 1,100 soldiers used as security suffered injuries.

Back at the event venue at the Windsor Hotel, there was a bit of an anticlimax, as in the end only one consortium deposited its bid in the ballot. With the lack of competition, the consortium comprised of Petrobras (10%), Shell (20%), Total (20%), CNPC (10%) and CNOOC (10%) offered the established minimum 41.65% in profit oil to the federal government, winning the first Pre-salt bidding round held by the Brazilian National Petroleum Agency (ANP). With the established a 30% stake to be acquired directly by Petrobras, the National Operator’s total participation in the consortium will be 40%. A signature bonus of around $7.5 billion is to be paid by the winning consortium in a single payment, and the total amount payable by Petrobras will be around $3 billion relative to its participation in the consortium. The contract states the block exploration phase will last four years. The minimum exploratory program, to be carried out during this period, includes 3D seismic for the whole block, two exploratory wells and 1 extended well test.

Petrobras highlights that recoverable oil volume estimates, costs, investments and schedule of the production systems of this block will be progressively released in a timely manner as the minimum exploration program is developed.
The national operator believes that the integration of expertise and experience of the European partners, Shell and Total, with their wide expertise in deepwater development and by their long experience in managing the design and implementation of large projects, will contribute to achieving good production results in Libra. The participation of the Chineses companies, CNPC and CNOOC, complements the requirements for a strong and active consortium, leveraged by the financial strength of the Chinese companies. Peter Voser, Chief Executive Officer of Royal Dutch Shell, said, “The Libra oil discovery in Brazil is one of the largest deep water oil accumulations in the world. We look forward to applying Shell’s global deep water experience and technology, to support the profitable development of this exciting opportunity.”
Brazilian President Dilma Rouseff, commenting on the complaints being made by the nationalist demonstrators, said, “According to the auction results, 85% of the total profit to be produced by the Libra field will be owned by the Brazilian State and Petrobras. This is very different to privatizing.”
He added, “Brazil is and will continue being a country open to national or foreign investment, which respects contracts and preserves its sovereignty. For all this, the Libra auction represents a marquee in the history of Brazil.”

Consortiums will be composed of a maximum of five companies. 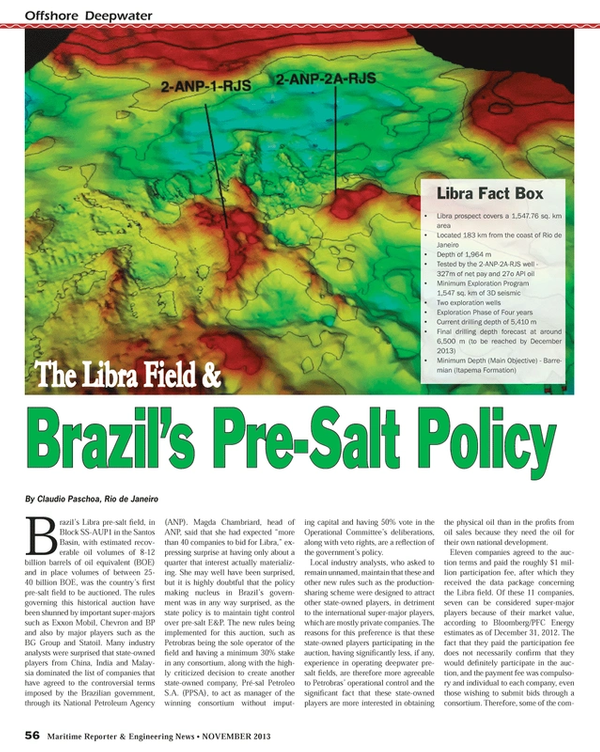