Return of the Electric Boat

In the 1880s it was possible to cruise your way around London by an electric ferry on the River Thames. At its height, the river carried 13 launches, each measuring 28 ft. long. They glided along at five knots and had a range of about 60 miles.
Each launch carried one ton of storage batteries hidden underneath the passenger seats. Charging stations were even placed along the river so these electric launches could continue up and down unhindered.
An article in Scientific American from 1883 praised the effortlessness they imbued: “the operation of an electric launch is the ideal of ease and simplicity. It consists, practically, of turning a switch and – letting her go.”
Designed initially by Gustave Trouve one year before, the first electric boats came complete with a headlamp and a horn.  But the electric boats on the River Thames were bigger. In addition, they were also quiet, more spacious and cleaner than their competition - the steam powered ferry.  “[Electric] launches are chiefly wanted in the summer when the heat and smoke, smell, oil, and dirt of a steam launch are objectionable,” one magazine reported. But as soon as they came to existence, they disappeared only a decade later – replaced by the advent of the internal combustion engine. Over a hundred years later, however, it seems electric boats are making their resurgence. This time will they stay?

The Return
Newport, Rhode Island is known for its grandiose sailboats and motoryachts, and the Newport Boat Show is a yearly landmark for enthusiasts asking the question, what’s next? The end-of-the-summer event brings dealers and customers from around the world together.
For most, it’s not their first time attending and the selection doesn’t change much year-to-year. On one side, you have sailboats – on the other, powerboats. But this year featured two companies who have never been to the Show before. And they were introducing something that few people had ever seen.
Enter the eCraft 20, a sleek open-transom day cruiser operated by a joystick that comfortably seats eight people.
“The whole design of the boat came from the fact that there’s no outboard motor and no inboard box,” said Rogan Van Gruisen of eCraft Yachts, “meaning we can create this wide open-transom design.” Van Gruisen, a native Newporter who studied yacht design in England, teamed up with esteemed naval architect Matt Smith to create the eCraft 20, an all-electric powerboat that can cruise at maximum speeds up to 8 kts. and easily go 30 nautical miles at its cruising speed of 5 kts.
“You’re not storing any fuel, you’re not spilling any fuel,” Rogan said. “The fact that you’re traveling silently is pretty amazing. And the cost benefits: it’s really cheap. We figured out that it’s about $1 of electricity to fully charge the battery. That’s the equivalent of what, $40 of gas if you’re motoring around all day?”
The eCraft 20 was designed for the weekend powerboater who wants a craft that can take him anywhere in the bay. But what if you wanted to extend your range just a little farther? Or perhaps go a bit faster? \We spoke with Constantine Constantinou of Greenline about the Greenline 33, which happened to be parked just a few feet away from the eCraft 20 that day.
“There’s a few electric boats out there,” Constantinou said. “But they’re smaller for the most part. We have the largest available electric/hybrid boat out there.”
The Greenline 33, of which over 300 have been manufactured so far, has a range of over 700 nautical miles with a cruising speed of seven knots. Because of its specially designed “superdisplacement” hull, it creates less wake. Combined with a solar paneled roof that can recharge the ship’s battery over the course of an entire day, the Greenline 33 offers a completely unique way to travel on the water.
Constantinou weighed in on the challenges electric and hybrid boats face. “The only problem I can think of that might be an issue is for the market to see these boats as functional and reliable. When Seaway [who owns Greenline] came up with this concept in 2009, it was right at the beginning of the economic crisis.”
“Everybody was gun-shy. They didn’t want to consider any new products. But Seaway thought that the product was so compelling. It was something new. They placed their faith in the product and since then the boats have received over 20 international awards for innovation and environmental friendliness. We have now over 400 boats that have been built in the last two and a half years. It’s a great success story.”
This success story that Constantinou talks about is one that’s been in the works for over 100 years now. When electric launches came on the scene in the 1880s, the promise this technology offered seemed poised to explode.
“Electrical power for river launches is now an established fact on the Thames and will probably be much improved in the coming years,” claimed Scientific American.
There was talk of adding more charging stations along the river to accommodate for the increased demand of electric boats. Three years after the first launches on the river Thames, one million visitors to the 1893 Chicago World’s Fair were transported via electric boat.
But it was the World’s Fair, surprisingly enough, that also spelled the fall of the electric boat. And, coincidentally, the rise of the internal combustion engine.

A Petroleum Boat
First and foremost, William Steinway was a piano craftsman.
But in the 1880s, he was also the financier who brought the petroleum-based internal combustion engine into the limelight when he met Gottlieb Daimler on a quest to Europe for ideas. Steinway purchased a trolley car powered by Daimler’s new engine and the manufacturing rights to any Daimler products in the United States for a whopping sum of $10,000.
Steinway, who initially planned to use the “horse-less trolley” to transport pianos, quickly saw the potential for the engine to be used in the marine environment. He had a Daimler internal combustion engine launch built and transported to the World’s Fair for the masses to see.
In October of 1893, just weeks before the end of the Fair, a dory capsized in the cold Lake Michigan waters. It’s described that three boats were sent out to the rescue: a lifeboat powered by sailors on the battleship Illinois, a naphtha-powered launch, and William Steinway’s one-of-a-kind internal combustion engine launch.
The vessel on the scene first was Steinway’s launch. Described as a “miracle for speed”, the boat travelled 15 kts. to the rescue. The first petroleum powered boat saved the capsized sailors and Chicago newspapers announced to the world that Gottlieb Daimler had created the first high-speed engine.
“Nothing can explode,” the newspapers reported later about the internal combustion system. After Steinway passed away, Daimler Motor Group was sold to General Electric and eventually became famous for the “Mercedez” engine. Daimler stayed with cars but the quest to create a better petroleum-based motorboat was on.
The electronic launch was out. Internal combustion was in. They simply traveled farther and faster.

The Future
More than 100 years later, it seems as if the tides may be turning for the electric boat.
In October 2013, the world saw the first ever electric/hybrid boat convention held in Nice, France. Aptly named “PlugBoat”, the conference drew in 70 delegates from over 14 countries in an effort to connect industry, R&D, and non-governmental organizations.
“It emerges that, although small in comparison to electric automobiles, battery-electric boats and hybrid-electric boats are making steady and very positive progress across Europe,” summarized Kevin Desmond, a representative for the PlugBoat conference. Torqueedo, who made headlines recently with the introduction of an 80 HP and 40 HP electric outboard motors, sponsored the weekend-long event.
“Given the significant output of the automobile manufacturers and the steady and unprecedented rise in electric car sales,” said Desmond, “the worldwide electric boat fleet will continue to grow to a point where there will eventually be more electric boats than [boats powered by internal combustion engines].”
In his talk addressed to the delegates, Desmond described the progress electric boats had made in the past 30 years and summarized his vision for the future, including the creation of a World Electric Boat Association.
Desmond echoed similar sentiments that Constantine Constantinou of Greenline had concerning the challenges electric and hybrid boats face. “The challenge will be to convince owners and operators that there is no need for range anxiety. We need to realize that electric boats are calming, even therapeutic, in a world where stress is a serious threat.”
Van Gruisen, when I spoke to him last, offered up that battery technology will be last frontier when it comes to electric boats.
“It’s the last piece of the puzzle. As battery technology increases, we’ll hopefully see electric boats going faster and farther.” 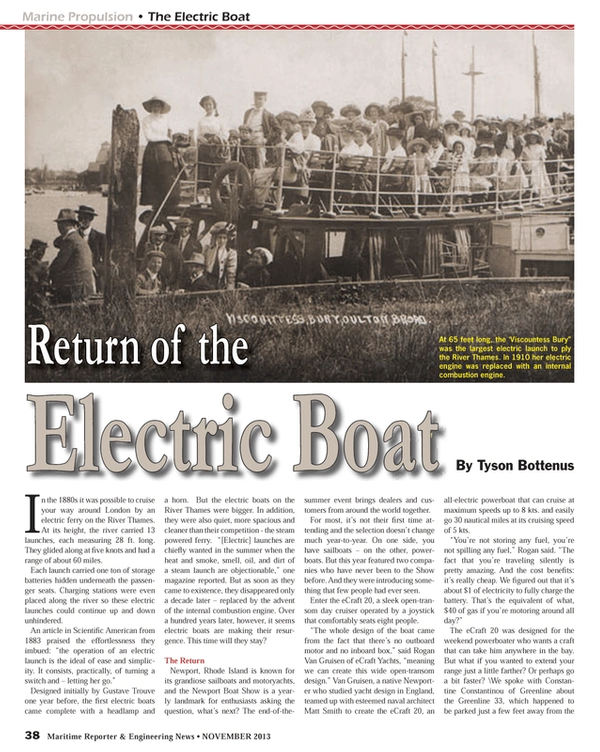 Read Return of the Electric Boat in Pdf, Flash or Html5 edition of November 2013 Maritime Reporter