Caterpillar Marine and Power Systems was one of the most active companies at the 2013 International Workboat Show in New Orleans, debuting several new products that are compliant with EPA Tier 3 and 4 regulations, and finalizing the acquisition of propulsion equipment manufacturer Johan Walter Berg AB.
Caterpillar Inc., which is one of the biggest names in industrial equipment, engines and turbines, recorded 2012 sales revenues of $65.9 billion. Contributing to that sum is Cat’s globally-operating subsidiary, Caterpillar Marine and Power Systems, which was established in 1996 to conduct all sales and service operations for its Cat and MaK marine power and propulsion products. According to Caterpillar Marine project manager Luiz Pustiglione, the company is in the midst of a strong 2013, especially in the tug/salvage and offshore sectors. “[Cat is] continuing to drive innovative solutions and services to the market,” he said.

Tier 4
In New Orleans Cat unveiled its first marine engines to reach U.S. EPA Tier 4 requirements: the Cat 3516C, Cat 280-8 and Cat 280-12. Targeting the tug/salvage and offshore industries, Caterpillar’s Tier 4 platforms combine fuel efficiency (approximate 5% fuel reduction) with selective catalytic reduction (SRC) aftertreatment system to meet the Tier 4 NOx requirements.
Though Cat said it anticipates expanding its Tier 4 compliant line with the launch of several additional offerings in the near future, for now the existing Cat Tier 4 options are as follows:
•    The Cat 3516C will be available in ratings of 2,240/2,350 bkW at 1,800 rpm, and an auxiliary or diesel electric propulsion solution at a 2,250 ekW,
•    The Cat 280, in both 8- and 12-cylander configurations, is available at 2,460/2,710 bkW at 1,000 rpm and with auxiliary engines and diesel electric propulsion generator set available of 2,7185/2,400 ekW at 900 rpm for the C280-8 option, and 3,700/4,060 bkW at 1,000 rpm with auxiliary and diesel electric of 3,320/3,640 ekW at 900 rpm for the C280-12.
Caterpillar already possesses a range of EPA Tier 3/IMO II compliant propulsion options. One of them, the Cat C32 ACERT, became available this year as an EPA Tier 3 certified auxiliary option and generator set. Now with a separate circuit aftercooling system (SCAC) for three power ratings (A-C), the system removes seawater from its coolers. According to Cat, the C32 ACERT provides favorable operating costs and longer oil change intervals, while the C32 ACERT offers seven WOSR ratings.

Berg Acquisition Complete
Also in New Orleans, Cat Marine announced the finalization of its acquisition of Johan Walter Berg AB and its subsidiaries. Berg’s core brand, BERG Propulsion, which manufactures mechanically and electronically driven propulsion systems and marine controls, will now fall under the umbrella of newly formed Cat Propulsion Systems.
With this Caterpillar follows the trend toward becoming a one-stop-shop for full powertrain needs, from the engine to the propeller.
According to representatives from Cat, there are already more than 2,000 vessels operating with Cat/Berg integrated power and propulsion. To simplify this arrangement, Cat customers can now obtain a power solution and thruster/propeller package from one source, without a third-party vendor.
Nigel Parkinson, managing director of Caterpillar Marine Power Systems, said, “As a result of [this acquisition], our customers can rely on Caterpillar and the Cat dealer network to provide the total package: a complete propulsion system that is supported globally.”
Propulsion system bundles from Cat now include controllable pitch propellers, transverse thrusters, azimuth thrusters, aftermarket parts and remote control systems to correspond with all Cat and MaK medium and high speed engines.
Tom Frake, Vice President of Caterpillar’s Marine and Petroleum Power Division, said Caterpillar is targeting additional acquisitions, like Berg, as the company aims to maintain growth in the marine division. Frake said that Cat spent roughly $400 million in the last two years on research and development, a trend that he noted is likely to continue as the company plans future investments.
Company research and client feedback led Caterpillar to recently expand its customer support with new repair solutions and extended warranty coverage. Operators such as Hornbeck Offshore and Harbor City Ferries have already purchased customizable service and repair options as part of the company’s new 3406 bundled repair solution, a customizable kit for expedited major engine overhauls. Now temporarily available with the kit is complimentary two-year, 6,000-hour warranty extended service coverage, with an option for up to three years and 12,000 hours. 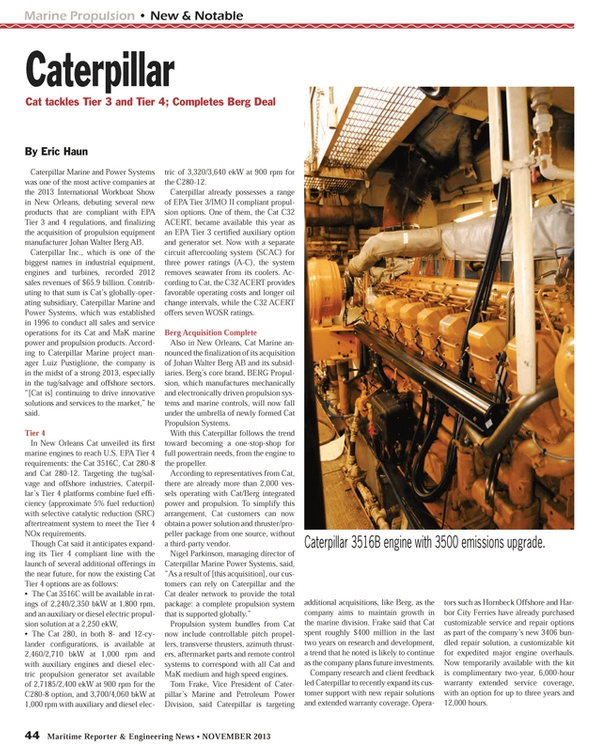