Pull the Handle Down...

One of the most effective and easiest fuel reduction operations is reducing the engine power by reducing the speed of a vessel.

Out of the total operational costs of a vessel, fuel costs account for, by far, the highest proportion.
When fuel prices soared, the technical experts of one of the world’s biggest shipping companies set about to solve the problem, and slowing down was the solution they devised.
By 2009 significant fuel savings resulted from sailing its ships at 12 knots instead of 24, and ”Slow Steaming” officially became the standard operating procedure in their fleet. Meanwhile, today, it is standard in almost all existing shipping companies, as shipowners for the past five years have simultaneously battled reduced freight rates and rising fuel costs.
In addition to the fuel benefits, there is also reduced greenhouse gas (GHG) emissions, absorption of excess fleet capacity and increased schedule reliability.

You Say Slow Steaming, I Say Low-Load
While marine engine manufacturers such as MAN and Wärtsilä describe their operation mode as “Low-Load Operation,” shipping companies are talking about ”Slow Steaming.”
Slow steaming refers to the practice of operating transoceanic cargo vessels, especially container vessels, at significantly less than their maximum speed. According to Maersk Line, which introduced the practice in early 2009 because of the worldwide financial crisis in 2008, slow steaming was conducted at 18 knots. Vessel speeds of 14 to 16 knots were used on Asia-Europe backhaul routes in 2010. Speeds of 12 to 14 knots were called ”Super Slow Steaming.”
In the early days of slow steaming operation, mainly container vessel operators requested to operate at low loads. Today, shipping companies featuring tankers, bulkers, and a variety of ship types, are operating continuously at low load, but with a high degree of flexibility in terms of vessel speed.
Vessels, which have been built before the crisis took place, were already designed to enjoy enormous fuel savings and economies of scale. For example, the large container vessel Emma Maersk saves around 4,000 million tons fuel on a Europe to Singapore voyage, simply by pulling the handle down. At a typical $600-700 per ton, this results in around $2.4 to $2.8 million fuel cost saving on a typical one-way voyage. Particularly amazing, as these ships were not originally designed for slow steaming.
With this came pressure to the engine manufacturers.
They were tasked to ensure a reliable and a long operating engine. But overall, they were well prepared, as MAN’s Senior Manager Operation Dept. Stig Baungaard Jakobsen explained: “In late 2008 we were able to operate our new developments with continuous low-load operation down to 40% load, and in May 2009 we were ready to support continuous low-load operation down to 10% load. Nearly all service experience with this mode since than has been positive.”
And Christian Ludwig, Senior Manager Retrofit & Upgrade said, “(Important for this success was) the application of the standard fuel injection valves of the slide valve type. Slide-type fuel valves significantly reduce fouling of exhaust gas ways, especially when operating at low-speed and should be retrofitted on older engines which are not equipped with slide fuel valves from the outset.”
Jakobsen said, ”Soon after it became normal to operate at extremely low loads, the request to optimize running at low load surfaced.” At MAN it supported this in two ways:
•    increase the scavenging air pressure at low and part loads, and
•    reduce the cylinder oil feed rate at low load.
“Most elegantly, this was supported on the electro-hydraulically controlled ME-engines,” Jakobsen said. “The ME engine control system (ECS) is designed to control variable turbine area (VTA) turbochargers, exhaust gas bypasses (EGBs) and flexible turbocharger cut-out systems.”
Christian Ludwig added, “For engines in service, the flexible turbocharger cut-out system with control of so-called ‘swing gate valves’ has become a retrofit solution applied in many cases on engines with two, three or four turbochargers. For a big-bore MAN engine of type 12K98MC operated at average 40% load, yearly savings on fuel costs by applying turbocharger cut-out amounts to approximately $1 million.” Ludwig added, “Today optimization of the cylinder oil feed rate at low load is important. The MAN Alpha Lubrication System has been further developed for MC and MC-C engines with the aim of more accurate feed rate control in the low load operation area. To cut it short: all running Alpha Lub Systems on MC and MC-C engines could benefit from upgrading the Alpha Lub System.”
“Currently we are introducing our solution for avoiding cylinder liner cold corrosion in turbocharger cut-out mode with modified jacket cooling water bypass. With this system, normally up to 75% of the jacket cooling water will bypassing the cylinder liner cooling bores,” said Jakobsen.

From the Operator Point of View
NSB Niederelbe Schiffahrtsgesellschaft mbH & Co. KG, Buxtehude (REEDEREI NSB) is one of the leading containership managing owners in the world. With a fleet of 85 vessels (76 container vessels) the company, which was founded in 1982, provides quality “Made in Germany.”
Apart from the ship management of containerships, tankers and offshore jack-up vessels, REEDEREI NSB is supervising new-buildings and is active in crewing of both its own ships as well as vessels of other parties. At its own NSBacademy, which employs a modern Ship-Handling-Simulator, employees from ashore and seafarers are trained and educated on a regular basis. In its headquarters in Buxtehude and its branches in the United States, Korea and Singapore, REEDEREI NSB employs approximately 250 men and women and 3,000 seafarers. Maritime Reporter & Engineering News editor Peter Pospiech had the opportunity to talk to Jörg Erdtmann, Head of Engine Operation Department (EOD), about the company experiences of Super Slow Steaming. NSB features MAN and Wärtsilä engines as well.
“We at NSB have incorporated slow steaming and later on super slow steaming actually already in early 2006,” said Erdtmann. “A significant measure aimed at reducing costs in the daily operation of our vessels is Super Slow Steaming, in which the main engine runs at only a very low load (10-45%). The impacts upon fuel consumption are enormous, as has been proven by the actual measurement data of an NSB vessel of the 6,500-TEU class:
According to these measurements, a reduction of speed from 25 to 12 knots results in a reduction of fuel consumption from 246 to 35 tons of heavy oil per day – this corresponds to a reduction of almost 85% at half-speed. Considering the actual fuel price, we are using mainly RMK 500 and 700 on all our vessels, of around $600 per ton our charterer could save around $126,000 per day! On the other hand the fuel prices were rising enormous and more ships were required to continue weekly departures”.
“However, negative consequences of Super Slow Steaming must also be taken into consideration: since ship’s engines designed before the rapid increase in fuel prices and the beginning of the world economic crisis and had not been designed for operation at only 10-45% of the engine’s actual power, operation at such low levels may lead to damages. Our most experienced frequent problems are:
•    Failure of the auxiliary fans
•    Over-lubrication
•    Accumulation of soot in the engine
•    Cold corrosion
In order to combat these problems, EOD has developed a number of measures:
•    Modifications of the main engine auxiliary blowers
•    Conversion of the cylinder lubrication system to slow speeds
•    Fitting of dynamic turbo charger cut-out systems
The overall effect achieved by all of this is that it will permit the main engines on board our vessels to be operated both very economically and at the same time in a manner that is safe and as gentle on the materials as possible.
“Not to forget, and this is very important, we are working closely with the engine manufacturers to solve the problems,” Erdtmann said. ”But vessels speed reduction is not all to improve the efficiency of our ships. We are using a number of other subjects as well, such as trim optimization software, modern weather routing software, propeller adaptation to the reduced speed of the vessels, special anti-fouling coating for the hull, an adapted bulbous bow and other things as well.”  According to Erdtmann a number of things have occurred because of the enormous speed reduction. Many individual measures were initiated and implemented so that the NSB-ships could be operated efficiently in the long term in this Super Slow Steaming area, which was actually intended only for operations on rivers.
•    Initially, damages were caused to the main engine auxiliary fans. Counter-measures were immediately initiated: spare fans were procured and these were equipped with special seals and bearings.
•    Scavenging air-duct-check-valves require alert crew
•    Increased cleaning requirement for turbocharger nozzle rings and exhaust gas boiler plants
•    Installation of flexible turbocharger in ongoing vessel operation
•    Precautionary measures against engine overloading
Erdtmann summarized: ”But at the end of the day we can say that Super Slow Steaming is a very worthwhile measure to be competitive for now and also in the future” 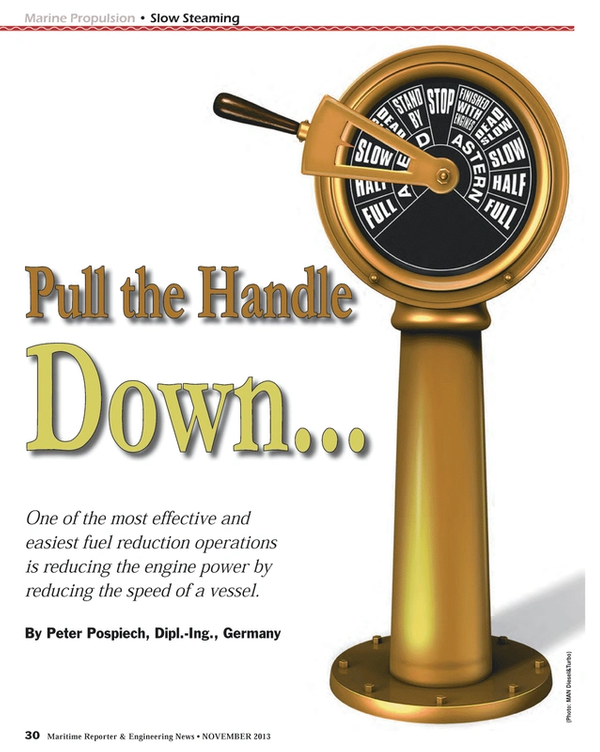 Read Pull the Handle Down... in Pdf, Flash or Html5 edition of November 2013 Maritime Reporter