While many owners discuss ideas to suitably maintain maritime service while slashing operating costs, Seasteak LLC, owners a 43m fast ferry Wall Street, put words into action with a dramatic propulsion switch that saw the company maintain sailing schedule and speed while reducing fuel consumption 30% and CO2 emissions 50%.
Wall Street, a 43m fast ferry owned by Seastreak LLC of Atlantic Highlands, NJ, was originally built by Gladding-Hearch Shipbuilding and launched in 2003, the third of four sister vessels. As built, Wall Street was equipped with four KaMeWa A50 waterjets powered by four Cummins KTA50 diesel engines of 1424kW each and a total output of 5696 kW. At the time of construction, the vessel was state-of-the-art, and the four-engine package was selected with an emphasis on speed and reliability on the Atlantic Highlands, NJ, to Manhattan service.
As the equipment aged and fuel prices skyrocketed, however, the decision was taken to investigate repower options for the ferry, as the owner sought a reduction in both emissions and fuel consumption, as well as reduced maintenance cost and reduced wake during operation.
Seastreak’s director of vessel engineering developed estimates based on Servogear’s Ecoflow Propulsor concept. In cooperation between Servogear, Norway, Incat Crowther Design (the vessel’s original designer) and Seastreak, the repowering was studied.
With the assistance of a U.S. government energy efficiency improvement loan Seastreak made the decision to remove one ferry from service and refit it from a quadruple engine/water jet vessel to a twin engine twin screw Servogear CPP propulsion system.
In addition, the owner decided to power the vessel with a pair of MTU 16V4000M53 diesel engines rated 1840 kW each. In looking at the vessel’s operational profile, Servogear’s controllable pitch propellers, tunnel design and rudders promised a significant fuel saving at the vessel’s 32 knot operating speed. With Incat Crowther providing a comprehensive design service, preparing detailed drawings and documentation including revised Coast Guard submissions, the contract to perform the work was awarded to Midship Marine in Louisiana. The engine re-powering entailed a re-configuration of the vessel’s aft. The topsides and the undersides of the hulls were removed from the waterline down, from the forward engine room bulkhead aft. New engine beds, longitudinal stiffeners and plating were fabricated to support the MTU-engines and ZF-gearboxes. Servogear designed tunnels lower hull resistance and provide optimal inflow of water to Servogear’s propellers and rudders.
Together with interior and exterior modifications, Wall Street today is 15 tonnes lighter than when originally built.
At sea trials the vessel recorded speeds of 36 knots, and at equivalent deadweights, this represents a reduction in top speed of three knots, despite a significant reduction in power. When the increased passenger capacity is considered, the refit means that per-passenger CO2 emissions are halved.

The Servogear Ecoflow Propulsor
Servogear is a Norwegian company, and like many of its brethren, it was born in the early 1970s to serve a large, dynamic and technically stressed fishing fleet around Norway. Established in 1973 in Rubbestadneset, Norway, today the company serves a diverse customer base globally, from fast ferries to offshore service vessels to workboats and yachts. It employs 48 and to date has delivered more than 1500 gears and propulsion systems worldwide. The Servogear Ecoflow Propulsor concept is highlighted by a variable pitch propeller in a unique propeller tunnel. The entire system is inclusive of: a special effect rudder; shaft and support brackets; reduction gearboxes, and stern tubes. 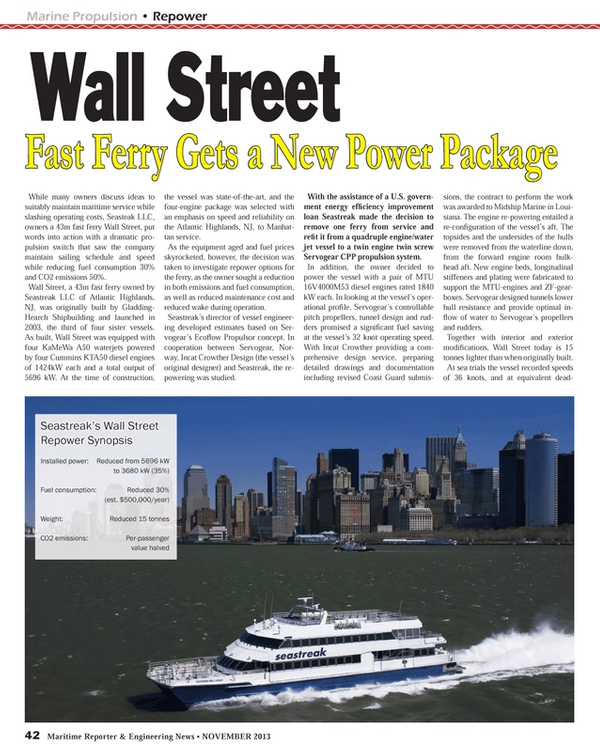