e-Navigation aims to harmonize navigation systems and ultimately make the mariners’ job easier, but its implementation will necessitate extensive changes to maritime training. Dr. Michael Baldauf of the World Maritime University, discusses the reasons for change, progress made so far, and further changes that will need to be made to reap the benefits of e-Navigation. In recent years, bridges have become increasingly ‘smart’ with a plethora of new equipment, systems and interfaces. New pieces of navigation equipment and sophisticated systems have been introduced both onboard and ashore, primarily to improve safety. New equipment such as Automatic Identification Systems (AIS), Voyage Data Recorders (VDR), Simplified Voyage Data Recorders (S-VDR), Integrated Navigation Systems (INS), Integrated Bridge Systems (IBS), and numerous others, are found on state-of-the-art navigational bridges, providing the mariner with vast amounts of useful information. Indeed, some of these tools are mandatory for vessels from regions covered by the International Convention for the Safety of Life at Sea (SOLAS).
The advent of Electronic Chart Display and Information Systems (ECDIS) was a major cornerstone but, in order to ensure that all electronic equipment works and performs optimally, it must be integrated under an overarching framework - just as all of the instruments in a large orchestra need to be tuned and harmonised to produce a good overall effect. This is what e-Navigation, a concept developed by the International Maritime Organisation (IMO) together with the International Association of Lighthouse Authorities (IALA), plans to achieve by standardising navigational tools in an all-embracing, over-arching system.
e-Navigation will bring together disparate systems, making the mariner’s job easier and subsequently, enhance navigational safety and efficiency. It will connect ship and shore by powerful communication systems and help all the operators on board - captains, pilots, navigating officers, engineers, as well as the vessel traffic service (VTS) and search and rescue operators, to effectively fulfil the tasks they are responsible for.

Education and Training Before e-Navigation
Before e-Navigation, the introduction of new systems into shipping was accompanied by related training measures. The IMO laid down all of the minimum requirements for seafaring personnel in the International Convention on Standards of Training, Certification and Watchkeeping for Seafarers (STCW). While this established the basic minimum requirements, Model Courses with specific training requirements were defined for special purposes and particular equipment. For example, the ARPA/Radar Model course or the ECDIS Model course, has become mandatory for navigators. Manufacturers and suppliers of navigational and technical equipment offer specific training courses for users to support the effective operation and handling of their systems in practice, but these systems are not standardized and therefore neither is the training on them. Mariners may be able to use equipment from one manufacturer, but not from another. This could have an impact on their career progression, as their experience and training may be not be interchangeable with those needed to operate other vessels. There are also significant safety implications of not being trained properly on the equipment they are operating.

The Impact of e-Navigation
So what impact, if any, has the introduction of the e-Navigation concept had?
ACCSEAS, a European project that is developing and implementing a practical e-Navigation test-bed to harmonize the exchange of electronic maritime information, has been assessing the impact of e-Navigation so far by conducting interviews and simulation runs with experienced mariners. Over the last year, ACCSEAS has conducted several simulation sessions, putting mariners into a potential e-Navigation environment with aspects such as the integration of route recommendation from a shore-based coordination centre. Mariners were also interviewed about their knowledge and training experience of e-Navigation.
The interviews showed that, while e-Navigation has a worldwide community, knowledge of the concept is still at a rather low level. Almost all of the interviewees had received no training in the concept of e-Navigation and the closest e-Navigation came to be mentioned was briefly as a part of BRM (Bridge Resource Management).
Most interviewees had learned about the concept from articles in industry magazines and journals, therefore most were self-informed rather than having undergone any specific training. More surprisingly, teachers and lecturers at recognized maritime education and training (MET) institutions were not fully aware of e-Navigation. While interviewed mariners expressed their wish to be informed and educated before the introduction of the e-Navigation based new systems and concepts, most of the maritime universities, academies and other training institutions consulted said it is largely not a subject of training modules, lectures or other types of courses at all. In this research, ACCSEAS found that ship operators would like to have harmonization of alarms and warnings when navigating in shore-based monitored areas. For example, warnings triggered by a collision and grounding avoidance system ashore must be harmonized with the system onboard in order to avoid confusion and delay. As a minimum, the training and education of users both onboard and ashore should be complementary.
Interviewees also supported the idea of standardized human-machine-interfaces, which they think would help to make training more effective and efficient than it is today. Greater standardization would mean that mariners are able to safely use systems, even if unfamiliar with them - much as the standardization of cars has meant that anyone who has learned to drive can safely operate any model of car.
There has been little change in training since the concept of e-Navigation was introduced. It is clear that new training requirements need to be implemented for e-Navigation, which introduces new applications such as enhanced anti-collision displays, dynamic tidal and current information integrated into ECDIS, as well as completely new services like route broadcast and route suggestion services for enhanced traffic management and coordination. Equally as important, navigators will need to be trained on the constraints of these systems, how to spot errors, and how to interpret warnings and alarms. Captains, pilots and navigators must be much more aware of the limits of any system used for navigation. VTS operators must take care when broadcasting information gathered from shore based sensor systems and inform the users of the reliability of the given information accordingly. This will hopefully combat an existing over-reliance on systems, which can cause mariners to miss important changes or warning signs. It’s likely to get harder before it gets easier as, before harmonized systems can be universally implemented, the e-Navigation community will need to decide on the standards, enforce them, and ensure all mariners are trained on them. The long-term training implications of e-Navigation, however, are positive. A higher level of standardization on navigation systems will lead to more standardized training, and this will be easier for the navigation community to provide and enforce in the future, and simpler for the mariner to complete.
The role of the ACCSEAS project primarily is to assess where there are training gaps and understand how training can be improved and made accessible to the mariner. It aims to develop and offer supporting training materials for all of the services designed within the e-Navigation test-bed and actively make these available to the shipping community.

About the Author
Dr. Baldauf is Associate Professor at World Maritime University and the Chief Instructor of Maritime Simulation researches on training needs and gaps related to e-Navigation. This research is carried out under ACCSEAS,  an EU-funded research and development project. 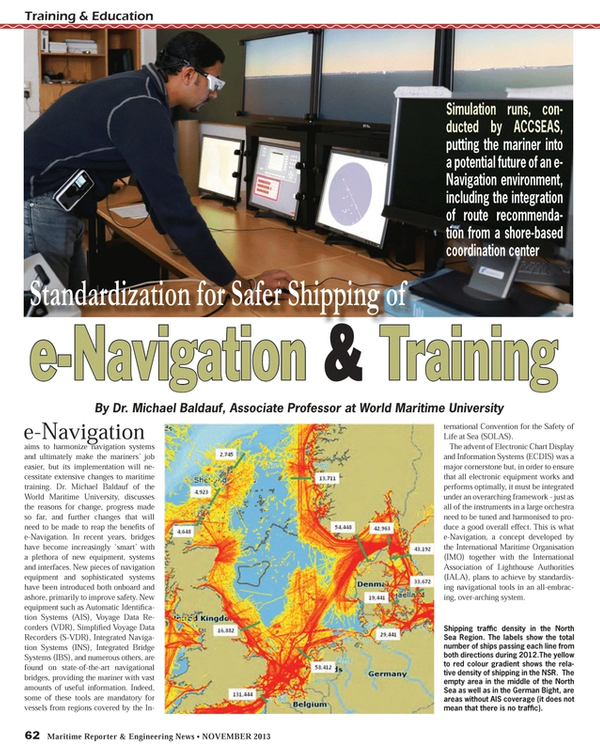