Growing Number of Available Units
Sixteen production floaters (13 FPSOs, 3 Semis) are off field and being remarketed for redeployment.  Another FPSO and an FSRU on order do not yet have a field contract – and a new FPSO just delivered to Brazil (OSX3) could come on the re-sale market as the field operator (OSG) has financially collapsed.

Trend in Inventory
The inventory of oil/gas floating production units is 15% greater than five years ago and 66% higher than ten years back.  This comparison includes all units in service, on order and off field – but excludes LNG processing units.  If the latter are included, the growth is 21% and 79% respectively.

Orders to Date in 2013
Since the beginning of the year there have been orders for 24 production floaters with a total contract value of ~$19 billion.  The orders include 11 FPSOs, 2 TLPs, 1 Spar, 2 Barges (1 oil/gas, 1 LNG), 7 FSRUs and 1 MOPU.  Details for orders to date in 2013 are available at www.imastudies.com.
The pace of production floater orders thus far this year has been running above the long term average.  Over the past 15 years orders have averaged 1.2 units per month.  The order intake pace this year has been averaging 2.4 units per month.
But the market could be hitting resistance.  FPSO orders in particular have been relatively weak.  Over the past five years an average of 15 FPSOs have been ordered annually.  At the moment it looks like this year will not reach this level of orders.
Backlog of planned floater projects – 218 floating production projects are in various stages of planning as of beginning November.  As shown below, close to 60% entail use of an FPSO.

About IMA & Jim McCaul
IMA provides market analysis and strategic planning advice in the marine and offshore sectors. Over 40 years we have performed more than 350 business consulting assignments for 170+ clients in 40+ countries. We have assisted numerous shipbuilders, ship repair yards and manufacturers in forming a a plan of action to penetrate the offshore market.  Our assignments have included advice on acquiring an FPSO contractor, forming an alliance to bid for large FPSO contracts, satisfying local content requirements and targeting unmet requirements through technology development.
Tel: 1 202 333 8501
e: [email protected]
www.imastudies.com 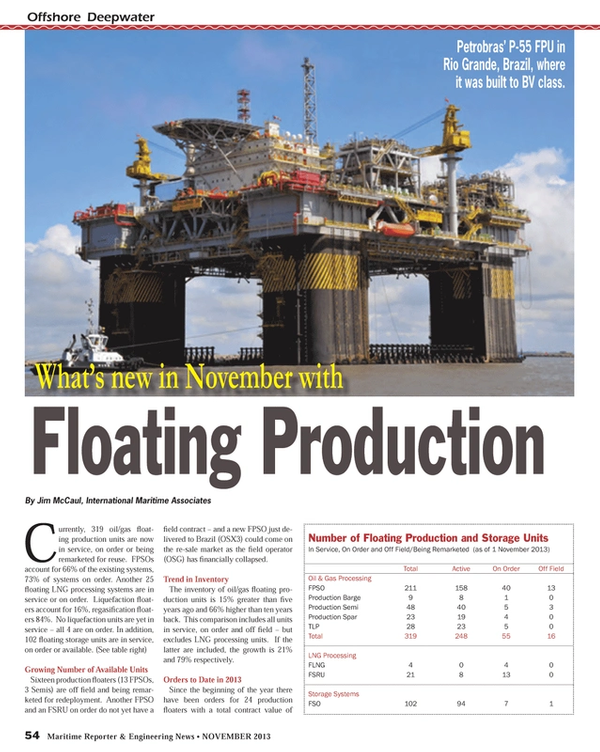