Editorial: Across the Seas & Around the World

Norwegians are seafarers, with maritime and offshore oil and gas tightly woven into the DNA of this population of more than five million. On the eve of Norshipping 2015, which is personally my twelfth Norshipping since 1993, the Norwegian Shipowners Association (NSA) released its annual “Maritime Outlook” report. Full insights on its findings start on page 42, and you can pick up the entire 126 page report online courtesy of the link provided in the story. I highly recommend a thorough read, as I believe the insights and projections contained within can be extrapolated and applied to most anyone doing business in the maritime and offshore O&G sectors. To boil it down in a couple of salient points:

1. The world is crazy, and it seemingly is only going to get crazier.
At a glance, one might surmise that oil prices in the $50 to $60 range posed the biggest near term threat to the health and welfare of Norway, given its stature as one of the world’s premiere oil producing nature, and the overall importance of offshore energy to its government’s and corporation’s treasuries. While subdued oil prices are a concern, it doesn’t even make the “Top 3” in terms of the big picture. Increasing tension and growing political instability in several key world regions is rapidly on the rise, creating problems such as dwindling international cooperation and a spike in the number of global refugees, problems that will resonate across the maritime sector for many years.

2. General economic stagnation ... except in North America ...
In tandem with and exclusive of the first point, many of the world’s major economies are still stalled in the wake of the global economic meltdown and lingering economic malaise of 2008. Seven years later, North America is one of the major economic bright spots, which is why the NSA counts the United States, Canada and Mexico as its top three countries for projected growth in 2015.

If you’ve never taken the opportunity to visit the Norshipping exhibition, I highly recommend the experience as I consider it to be one of the three best maritime exhibitions in the world. While Norway is the showcase, the event is packed with global maritime leaders from the ship owning, shipbuilding, ship equipment and service supply sectors, and from the preliminary view of the event for 2015 (http://www.messe.no/nor-shipping), all signs point to another successful week of business and networking in Oslo. 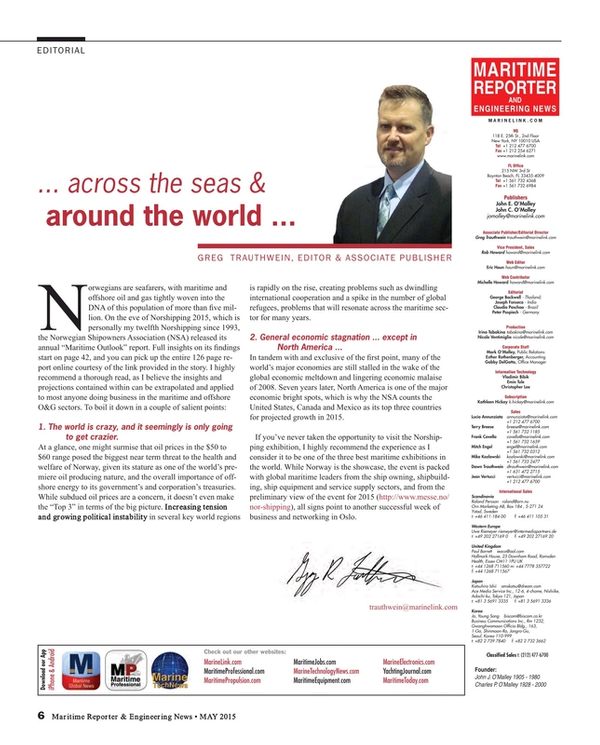 Read Editorial: Across the Seas & Around the World in Pdf, Flash or Html5 edition of May 2015 Maritime Reporter