“The first few months of 2015 have demonstrated, in the most visible way possible, just how complex and sometimes dangerous the maritime domain can be, as well as how important it is to maintain awareness, treat the risks and avoid complacency at all costs.”

Piracy and maritime crime is a complex matter, not one with easily identifiable or actionable answers. Dryad Maritime released its analysis of worldwide reported incidents of piracy and crime against mariners for Q1 2015, a report which includes but is not limited to traditional piracy and maritime crime, including also commentary on other threats and issues; from civil war and terrorism in Yemen and Libya to criminal gang enabled mass migration in the Mediterranean, a migration which resulted in an estimated 1,000 deaths during one particularly bad week in April 2015. Some highlights of the report include:
•    The kidnapping of crew for ransom continues to pose a real and viable threat to mariners off Nigeria.
•    Dryad reports that the privately funded Migrant Offshore Aid Station (MOAS) ship Phoenix will re-deploy in support of efforts to save lives off of Libya. The number of people attempting to cross from North Africa to Europe is up 40% this year.
•    The actions of the Houthi rebels in Yemen and the Saudi coalition response impacts maritime trade.
•    In the Mediterranean, the situation on mass migration continues to dominate the news with disturbing stories of massive loss of life that is impacting commercial vessels as they render assistance.

Southeast Asia
There has been a reduction from the high number of incidents from 75 in Q4 2014 to 56 in Q1 2015. Although the total number of incidents are down by 36% when compared to the last quarter of 2014, there has been a continuation of attacks against vessels underway in the Singapore Strait. The hijacking and subsequent theft of fuel cargo from small regional product tankers, so prevalent during 2014, has shown no sign of letting up. There have been four vessels hijacked for this purpose, three of which were successful and one in which the Malaysian Maritime Enforcement Agency (MMEA) managed to intercept resulting in the arrest of nine hijackers.

Indian Ocean HRA
Q1 in the Indian Ocean HRA is dominated by the Northeast Monsoon, which brings moderate winds and sea states to the northern Arabian Sea and along the east coast of Somalia. These conditions do not preclude piracy, but despite 26 advisory notices being issued by UKMTO, there have been no confirmed piracy incidents. Of note: some 89% of vessel reporting incidents to UKMTO were carrying a security team, of which on 39% of the approaches fired warning shots. On no occasion were there any reports of weapons discharged from any suspect skiffs.
The disintegration of Yemen into civil war has seen the closure of seaports around the country. A coalition of Muslim nations led by Saudi Arabia commenced daily bombing raids against Yemen’s Houthi rebels and warships from Saudi and Egypt commenced blockades of ports. Some national naval assets involved in the anti-piracy convoy system in the Gulf of Aden were re-tasked to evacuate foreign nationals from Yemen. The complex situation in Yemeni waters and ports is well reported but there is no political or military solution apparent. 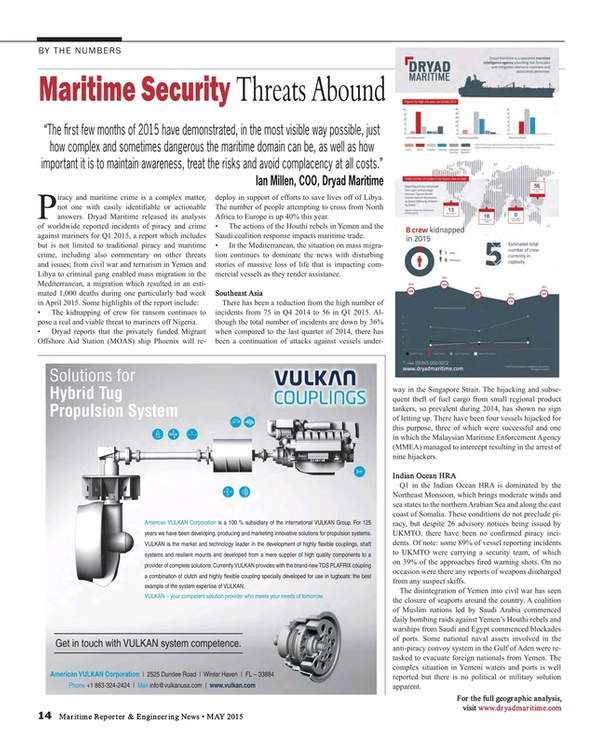