Norled Ampere, the world’s first all-electric car ferry, began service this year carrying up to 120 cars and 360 passengers across the 4.2-mile (6.8 km) Sognefjord channel that separates Norway’s villages of Lavik and Oppendal and empties into the North Atlantic’s Norwegian Sea.
The 260-ft. vessel recharges its dual 450 kW/hour battery packs after each docking in less 10 minutes – faster than today’s smartphones and the turnarounds of many conventionally powered ferries.
Operated by Norled, a Norwegian shipping company under license from the nation’s Ministry of Transport, the Norled Ampere includes a Siemens BlueDrive PlusC propulsion system that drives fore and aft screws.
The system features a vessel energy-management subsystem, battery packs, and vessel automation and control, including communication and control of the shore power charging unit. This system makes it fully automated and hands-free.

Matching Load Demands
While the Siemens solution delivers a range of frequencies and voltage for diesel, dual-fuel or gas-operated vessels, the Norled Ampere uses a custom-built, all-electric model. This eliminates the cost and emissions of the 264,000 gallons (one million liters) of diesel fuel that its predecessor’s 2,000-hp engine burned each year. In fact, the Norled Ampere will annually keep 570 tons of carbon dioxide and 15 tons of nitrogen oxides out of the atmosphere.

Designed for Efficiency
The Norwegian shipyard Fjellstrand AS designed the twin-hulled vessel, working with the Siemens Marine & Shipbuilding propulsion team on the design and center-hull placement of its BlueDrive PlusC gensets. The shipbuilder specializes in slim, lightweight aluminum hull designs, which the Norled Ampere uses.  With this design, the hulls weigh about half those of conventional catamaran ferries, further improving the Norled Ampere’s operating efficiencies and reducing its power requirements. It’s estimated that the Norled Ampere needs just 400 kW of power to cross the Sognefjord channel at 10 knots. The lighter weight also offsets the combined 11-ton weight of the BlueDrive PlusC battery packs – and the system itself saves 30 percent more space when compared to traditional, constant speed systems.
Norled sees other benefits of the all-electric, variable-speed propulsion system, including:

•    Fast response times to improve ferry operation, handling and safety: Intensive testing proves that even under variable speed control, the system supports highly demanding dynamic positioning. This is especially critical for the Norled Ampere’s safe docking operations, when most accidents can happen.

The Onshore Story
Ironically, the most interesting part of Norled Ampere’s propulsion package isn’t on the vessel – it’s on dry ground. One of the primary design challenges was solving for how the ferry could charge its high-capacity battery packs between crossings. Pulling a full charge into the batteries in less than 10 minutes would put too much stress on the modest electrical grids serving the Lavik and Oppedal villages. The ferry would literally cause power outages for entire communities. An alternative charging approach was required for dockside charging at each terminal.
Siemens worked with an energy company to develop a shore-based recharging station and optimized it to work with the ferry’s battery packs. The stations incorporate a liquid-cooled version of an energy storage system. It contains modules that use advanced lithium polymer cells, with a total charging capacity of 1.46 MWh. The energy management system monitors both thruster control as well as downstream consumers on the grid. It also controls the electrical flow between the batteries and the propulsion system. The flow of energy can be controlled bi-directionally, allowing for an overhauling load to be put back into energy storage. The recharging stations slowly charge themselves from the villages’ hydroelectric power grid continuously and at a very low current draw. At each ferry landing, the shore power-charger can quickly charge the batteries while passengers and cars are unloaded and loaded.

Keeping Norway Green
Out of 60 nations ranked in the 2014 Global Green Economy Index, Norway was second only to neighboring Sweden - and not by much. Government support of innovations like the Norled Ampere ferry is a big reason why the nation can wear its green designation with pride. Although Norway is one of the world’s top oil-producing nations, it’s blessed with abundant hydropower, which provides most of the country’s electricity and helps all-electric ferries like the Norled Ampere contribute to the Earth’s environmental well being. 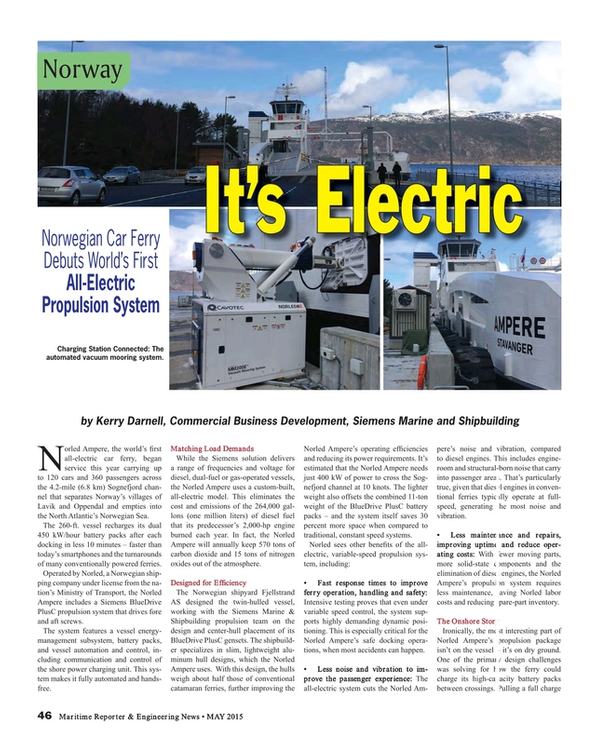