During the second half of the 20th century, the Japanese ruled commercial shipbuilding.
Today, numerous competitive forces in the Far East, led by South Korea and China, have continued to throw massive resources into building and maintaining modern shipbuilding dominance, so much so that it may seem as though the days of Japanese shipbuilding have passed for good. “Any single shipbuilder in Japan cannot fulfill a large-scale order, for example, for 10 ships,” an industry official told the Japan Times last September.
Imabari Shipbuilding disagrees.
The company is currently building one of the world’s largest dry docks to complete a record-breaking order for 11, 20,000-TEU ultra-large container carriers.
Imabari Shipbuilding, Japan’s largest shipbuilder, gets its name from Imabari City, which sits on the coast of Shikoku, the smallest of the four main islands of Japan, on the shores of the Seto Inland Sea.  The island of Honshū is across the sea to the northwest, and the island of Kyūshū just a small distance to the southwest. The Pacific Ocean and the Sea of Japan are both easily accessible from Imabari, while three islands shield the city from Tsunamis and the dangers of the open ocean, making this port city a haven for shipbuilding. The people of here have been shipbuilders since before sail gave way to steam and wood was replaced by metal. Dozens of shipbuilders and marine machinery and equipment manufacturers call Imabari home. In May, the city will host the annual international maritime exhibition, Bari-Ship 2015. Imabari is the heart of maritime Japan.
It was here that Imabari Shipbuilding was formed in 1942, when all the Imabari shipyards were consolidated into one company. The war was on and the Navy needed ships, big ones, and lots of them. After the war, it was the shipbuilding industry that helped to revitalize Japan’s war-torn economy. By the time the 1960’s arrived, Japan’s shipbuilding industry had supplanted Europe’s as the world’s largest. Up until 1999, Japan produced a majority of the world’s ships. South Korea surpassed Japan’s production in 2003, with China passing them both a few years later.
Today, the Imabari Shipbuilding group operates nine factories and 12 building facilities that produce a total of over 90 vessels per year. In 1995, Imabari delivered the La Loire, a 4,800 TEU post-panamax behemoth that was the largest in the world at the time but seems downright pocket-sized by today’s standards. Now, just 20 years later, the company is scheduled to deliver a 14,000 TEU containership, which is already dwarfed by new deliveries from South Korean and Chinese shipyards.
Japanese shipbuilders have been forced to adjust to the competition from their Southeast Asian neighbors. Many have moved towards specialization, focusing on creating high-value-added vessels, including cutting-edge eco-friendly ships. The thinking goes that Japan’s technology, especially safety technology, allow it to create some of the highest quality vessels, but keeping pace with Chinese and Korean rivals in terms of production and size would be seemingly impossible. Tsuneishi Shipbuilding, Japan’s third largest shipbuilder, has moved much of its production overseas to stay competitive, favoring the lower labor costs offered by the Philippines.
Imabari is choosing neither specialization nor outsourcing, instead doubling down on its local workforce and pursuing the world’s largest ship orders. The 11-ship order is a huge victory for the company, a victory secured with the help of the Marubeni Corporation, which will be delivered to an unnamed “overseas shipping company.” But delivering that order would be impossible without the construction of a dry dock project that will cost about $333 million.
The new drydock will be built at the company’s Marugame Headquarters, which is an hour and a half drive up the coast of the inland sea from Imabari. The newbuilding drydock will measure 600 x 80m (1968.5 x 262.5 ft.). Construction has already started on the new facility, which the company says will be completed in October 2016. After that the deliveries of the new container ships, which will be 400 m (1312 ft.) long and 59 m (193 ft.) wide, will begin in early 2018. The first delivery, Imabari believes, will be the largest in the world. 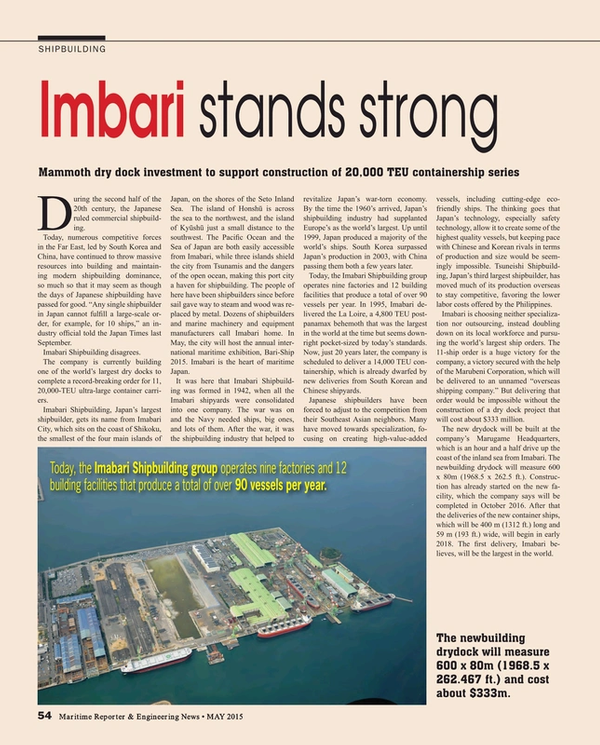