Sperre says it has a superior solution for equipment coolers onboard ships. Late last year it teamed with W&O to distribute its Sperre Pleat Coolers in the U.S. MR spoke to from Sperre’s Gard Sem (pictured) for insights.

While Sperre Pleat Coolers are designed to provide customers several advantages, including performance and the compact size, Gard Sem, vice president of sales and marketing, was most eager to discuss the maintenance characteristics of the system. The Sperre Pleat Cooler design is a module-based design with open elements designed to make completion of the required disassembly and cleaning process easier and quicker. “There are a couple of primary benefits of the pleat cooler solution,” said Sem. “First is time, as it takes one person one hour to clean this cooler, anytime, anywhere. Second is extended performance: users report extended periods between cleaning, with some clients claiming to get 18 month of use without cleaning the coolers.”
As anyone operating a commercial vessel can attest, ease of maintenance, particularly on the fly, is quintessential to long-term commercial success. Sperre studied the market thoroughly before bringing its solution to market.
While it has been on the market for a little more than three years, it took seven or eight years to develop. “Before Sperre decided to bring this product to the market it did a tremendous amount of testing to ensure that the product was ready to go from day one.”
Another advantage Sem touts regarding the modular nature of the system is the quick turnaround to deliver a system for the customer. “Our product is module based, and very easy to put together; I can provide a class-approved cooler in 48 hours, ready to go.”

Meet the Sperre Pleat Cooler
In Sperre’s design, a single pleat element housed in its own cartridge replaces between 15 and 20 plates and gaskets, and according to the company reduces maintenance time up to 80% for the entire cooler. The Pleat Coolers are available in a variety of sizes (see table above) and offers solutions for central cooling, auxiliary, and various combinations of engine cooling. According to Sperre, the technology is built on the same basic principles as conventional plate coolers, with the exception of the larger plate size, formed as one element. Each cooling element consists of continuous titanium from coil that is folded (pleated) and sealed at each end, as well as a frame with handles that encloses the titanium element. While Sperre has had its greatest success to date in the OSV market – largely because of the dominance of the OSV market in Norway – Sem said the company’s coolers are suited for any maritime and offshore reference, and to date has more than 100 vessels sailing with the technology.  But to truly extend its presence globally, Sem and company knew that it would need strong partners with intense market knowledge and penetration, much as it found W&O to be in North America.
“W&O has a tremendous presence with the sheer number of manpower that they have in sales around the U.S.,” said Sem. “It’s also the technical aspect of how the company is structured; they have a lot of sales people and a very strong engineering group. We could not do it ourselves in the U.S., operating from Norway.” While the partnership was just launched late last year, it has already bore fruit, as Sem notes orders in hand in the oil & gas and fishing industry sectors.
The Sperre system is suited to both newbuilds and retrofits, the latter the primary focus today with low oil pricing. Ultimately, Sem sees his greatest challenge today as simply bringing market awareness to the solution and encouraging sampling. He’s aiming for more references such as a Singapore owner with a fleet of 54 tug boats that were having major issues with its cooling, cleaning units two to three times per month, per boat, and changing gaskets two to three times per year. “I told him: you can try this cooler for six months. If you don’t like it, I’ll take it back,” Sem said. The goal was to cut down cleaning to one time per month. At the time of the interview, the vessel has been running for more than nine months without cleaning. “Before the six months was up, the owner made an order to change out and retrofit all of their coolers for the fleet.” 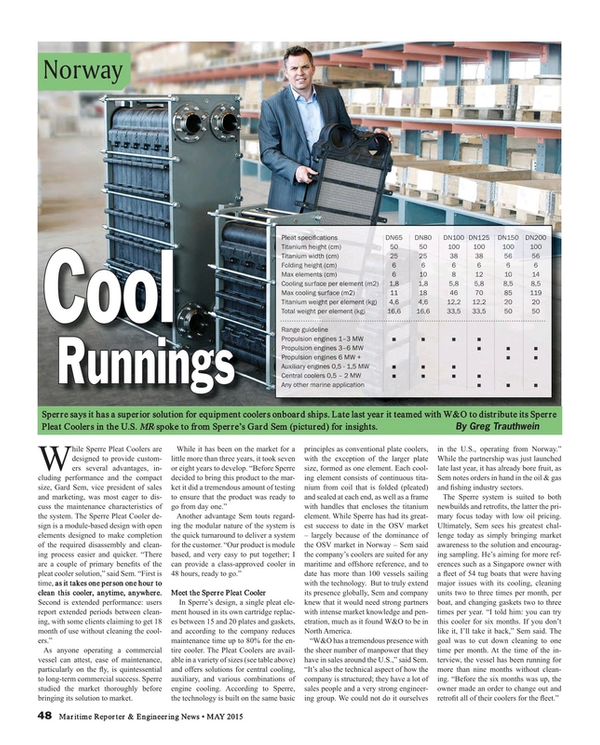