Snarled in Traffic, Intermodal Answers Include the Water

It was just last month that the (challenged) Keefe family packed up the SUV and set out for a little bit of spring break fun, mixed in with a college visit for my son, who will be a senior in high school next Fall. The decision to drive was, in part, an economy move but also made sense due to the relatively last minute nature of our plans. As it turned out, the trip to Florida and back from Charlotte, North Carolina, was without a doubt, the worst part of an otherwise pleasant week.

The GPS tells us that the one-way trip should take approximately 9-1/2 hours but we never got that number under 12 hours. Along the way, the reasons why quickly become transparent. Much of that Interstate corridor – Interstate highways 20, 95 and 75, for example – is badly over-utilized, too much of it is under what appears to be perpetual construction and the volume of freight borne by trucks over those same routes is staggering. I confess to cracking the seal on a lightly oaked chardonnay upon arrival in Sarasota.

On the way back, just before crossing into South Carolina from Georgia, large overhead neon signs warned of massive congestion ahead and all but told people to go and find another route. We did just that. Unfortunately, a few of those 53’ container trucks did the exact same thing. Along the way, we got a unique view of back country South Carolina that most folks never get to see, added another (scenic) 90 minutes to the trip but also no doubt got home hours sooner than we would have, continuing along our nation’s Interstate highways.

Underneath those trucks, the infrastructure is crumbling. Alongside those same vehicles, traffic has ground to a halt. I harp on the need for a true intermodal model for this island nation all the time. Never did the need for this come into clearer focus than during a frustrating trip along these choked highways. It simply doesn’t have to be this way. In fact, just few miles from Interstate 95, the Atlantic Intracoastal Waterway beckons to freight shippers of all kinds. But, since maintenance funds are typically doled out by the feds based on tonnage on the waterway in question, achieving the necessary drafts along this valuable asset is proving to be problematic. It’s the classic ‘chicken and egg’ story.

There are some success stories out there. The I-64 Express, for example, that runs between the inland port of Richmond, Virginia and Hampton Roads, has over time removed tens of thousands of trucks from the crowded I-64 corridor, while at the same time reviving the ‘container on barge’ concept. Championed by former U.S. Maritime Administrator and VA Transportation Secretary Sean Connaughton, that service is exactly what Ingram hopes to duplicate – and more. Separately and further to the north of Richmond, a ferry system running between Long Island, NY and Connecticut has for many years done the exact same thing. You see: it’s not about pitting one transport mode against another. You are always going to need a truck to take that box to its final destination. In my dream scenario, however, that driver is actually going to be able to go home at night and sleep in his own bed. And for an industry (trucking) which boasts among the highest turnover rates in their over-the-road employees of any business sector in the country, you would think that this sort of arrangement might hold some promise. But, hey, what do I know?

The reasons why we can’t seem to properly develop our so-called ‘marine highway’ system are many. The Harbor Maintenance Tax (HMT) on the short sea leg is surely one of them, but that’s only part of the problem. It is also only one part of the story. I recently listened to a public radio feature on the intermodal equation here in America. And, as seemingly well told as (their) story was, it also rarely mentioned the maritime aspect of the so-called American intermodal story. That’s not unusual, however.

We simply do not tell our story well enough, often enough and to the right people. That said; the annual “AWO Barge-In,” held just this week in Washington, is exactly the kind of effort designed to raise the profile of the marine sector that we desperately need. That event largely targets Congress and the legislative sector. We need to do more in our schools and with the general public, as well. The very well presented American Petroleum Institute (API) television campaign that is currently airing on national television, extolling the virtues of America’s energy industry is a perfect example of that.

There are forward thinkers out there. Take Ingram Barge Company, for example, who this month launched a test of a ‘container on barge’ service from Paducah, Kentucky to St. Louis, MO. “Currently our nation’s highways and railways are operating near full capacity, while our inland waterways are vastly underutilized,” said Dan Mecklenborg, Senior Vice President, Chief Legal Officer, Ingram Barge Company.  “We know there is substantial room to grow in transporting goods on the rivers with minimal investment.  And the inland waterways network is the safest and most environmentally friendly mode of transporting cargo in the U.S.”

At a press conference trumpeting the event, intending to raise awareness of the capabilities of intermodal river transportation, Mayor Francis Slay of St. Louis, said, “The Maritime Administration predicts the U.S. will need to move an additional 14 billion tons of cargo by 2050 to accommodate population growth. This means we will need to almost double our freight movement capacity within 35 years. If we are to meet this demand, remain competitive in the global marketplace, and reduce our carbon footprint, then the inland waterway system should be used as a competitive option.”

When the Ingram towboat leaves America’s Central Port, the towboat will return to Paducah where the Riverport Authority will unload the intermodal containers using a 200-ton tower crane, the largest in all of North America. We can only hope that this will be the first of countless barge moves, with future ones laden with actual cargoes.

Ingram sees the future and the future includes dry cargo barges that just happen to fit containers nicely in good numbers. Sure, it makes for a “green footprint” but Ingram sees a different kind of green, as well. Good for them. Think about it: bulk in one direction; containers in the other. Or, perhaps, the concept will catch on so well that the barges will need to be dedicated to container service full time. We can only hope and pray.

There’s no reason why U.S. waterways (everywhere else) can’t be a part of that vision. That’s the real story. That’s the story that we need to be telling. And, just be thankful you weren’t in my Honda Pilot last Saturday as we crawled across Florida – slower than a freight train in the rail yards of Chicago. In case you didn’t know, that average rail speed in the ‘Land of Lincoln’ is less than 9 MPH. It almost makes barges seem fast.

Daddy wasn’t happy on Saturday. And as the kids will tell you, if Daddy ain’t happy in the car, nobody’s happy. Let’s get those containers on the water. 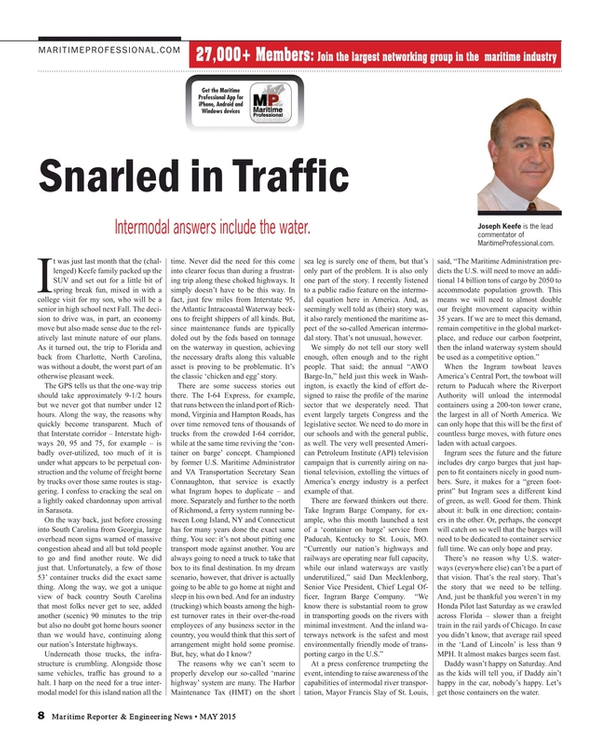 Read Snarled in Traffic, Intermodal Answers Include the Water in Pdf, Flash or Html5 edition of May 2015 Maritime Reporter