A broader-based payback from R&D

Consolidation in the diesel engine building sector is partly a reflection of the substantial capital expenditure required to maintain product development and technological advance in a business characterized by comparatively low unit margins.

By spinning-off new technical solutions arising from the engine design program into upgrading and conversion packages for existing populations of machinery, the manufacturer and licensor can gain more from R&D endeavors. Complementing new engine sales, product releases aimed at plant already in operation represents another stream of payback on heavy investment in technology.

The companion effect of the strategy, of course, is the broader benefit it brings to the client market, enabling gains in performance to be readily harnessed in existing operations.

As part of the thorough restructure implemented in 1998, full-line engine producer Wartsila NSD Corporation elevated aftersales service to the status of a business area in its own right, to create a growing earnings base. Not only does the sector generate some 25-26 percent of overall group earnings, its activities and results provide a stabilizing influ- ence in the face of volatility in the marine and landside markets for new machinery.

Under the direction of group vice-president Tage Blomberg, the service business area has augmented the traditional back-up activities with a dynamic approach to the development of what are termed as service prod- ucts. While this is reflected in an increasing range of support agreements, to meet rapidly evolving market needs, and while it is also manifested in a growing suite of maintenance and diagnostic software, it is additionally evident in the release of technology products for modifying existing engines.

Every development of a product generates new technical solutions, improved design and optimized processes. Upgrading is an economical method of injecting new life into older engines and installations, making the advances in reliability and efficiency otherwise vested in new machinery accessible to the existing engine base.

It is a concept that is attracting increasing interest from customers.

Among the latest releases are a bevy of nitrogen oxide (NOx)-reduction measures targeted at plant already in operation. Shipowners can accordingly upgrade older Wartsila Vasa 32 engines to the emissions-performance obtained with the successful Vasa 32LN design, reducing the NOx value below IMO-prescribed limits while also securing reduced specific fuel consumption. Other packages offered as retrofits are the Direct Water Injection (DWI) and Selective Catalytic Reduction (SCR) secondary methods of treatment.

In the two-stroke domain, the company also plans to make a new standard in piston- running technology available for application to existing Sulzer RTA engines.

The clutch of design modifications encapsulated by TriboPack promises significant extensions to times between overhauls (TBOs), a key element being the new chromi- um-ceramic top piston ring. The TriboPack improvements are being implemented as standard design changes in all newly-developed types, such as the Sulzer RTA68T-B and RTA60C lowspeed models, and will also come into play on larger-bore RTA machinery and progressively also as a retrofit package.

Carnival, Wartsila Clearing The Air As the world's cruise lines grow exponentially larger and are increasingly falling under the gaze of environmental and regulatory bodies, the push to ensure that ships are run safely, efficiently and environmentally sound gains new importance each day. The world's largest cruise ship company — Carnival Corporation (CCL) — has hooked up with one of the premier builders of marine diesel engines — Wartsila NSD — to develop a smokeless diesel-electric propulsion system for cruise ships.

According to Captain Jim Drager, Carnival's vice president of corporate shipbuilding, when complete, the enviroengine, installed in a diesel-electric propulsion system, will be one of the most environmentally friendly power plants available for ships. "We have studied the attributes of gas turbines, which we are considering installing on several Carnival Corporation newbuilds now under contract, but still believe that eventually our current diesel-electric systems can be as environmentally friendly as gas turbine alternatives," he said. Drager pointed out that because of efficiency, diesel-electric systems are far less taxing on precious fossil fuel assets and also emit substantially less carbon dioxide to the atmosphere, which is the number one contributor to global warming.

Direct water injection reduces nitrous oxide emissions by spraying water into the combustion chamber to cool it down immediately prior to injecting the fuel.

Paro said, "The cruise industry has made its desire to have the most environmentally friendly ships sailing the seas well-known to its suppliers, and we are happy to have Carnival working with us on this exciting development. Since the mid-1980s, Wartsila NSD has spent more than $100 million (U.S.) on emission reduction research." He added that Wartsila will have spent more than $10 million (U.S.) on the enviroengine development before the prototype testing models are even built.

Drager said that in addition to being utilized on future newbuild orders, power plants on several vessels currently under construction, including Carnival Cruise Lines' "Spirit-class" ships and the Costa Atlantica, could be converted to the enviroengines. Additionally, Carnival plans environmental conversions on several of its existing vessels, including Holland America's Alaska-based ships.

Delivering the technology A more commercially-inspired approach to the crucial subject of research and development can be expected to ensue from the dramatic reorganization set in train at Lloyd's Register. Prompted by the past few years' sharp deterioration in financial results, chairman David Moorhouse has instituted a far-reaching overhaul and streamlining of the society. His immediate aims are to rein back losses averaging out at $3.2 million per month, and reach breakeven by 2002.

Major cuts in the central establish- ment, much increased regional control and enhanced operating flexibility and customer responsiveness are corner- stones of the program. Moorhouse.

though, is acutely conscious of the need maintain a vigorous R&D program and ensure the capability to offer clients 'added-value' through technological prowess, at a time when every element of internal cost is being scrutinized.

In recent years, the R&D endeavor in its manifold forms has consumed some $12.8 -14.4 million annually, the bulk of which has involved the maritime dis- ciplines. While there is a sustained, high-level commitment to research, the shape and composition of the program in the future will be determined by closer scrutiny of the application scope for the technology concerned, and by consideration of prospective results. The indications are that efforts will be far more results-oriented than in the past.

Most importantly, LR's accent on improving the way in which it delivers service to its customers, as manifested in the new organizational framework, should ensure the increased effectiveness of technological efforts. Significantly, R&D activities will be ultimately overseen by the director in charge of the newly-created marine business stream.

Concerns at the sharp end The trend towards generally faster mercantile vessels, coupled with design evolution, calls for closer attention to the structural integrity of ships' forebodies.

Classification society Germanischer Lloyd brought in tougher standards for containerships last year, in the light of an increased incidence of forebody damage, while the Europe Union-sponsored Dextremel research project is addressing the effects of extreme waves on foredecks and b ow doors.

"Ship safety standards are normally verified using experience gathered in the past, which means that new designs or concepts are not always covered by existing standards," observed Jan Jankowski, director and managing director of PRS' marine branch. Accordingly, it is felt that increased responsiveness has to be demonstrated towards developments in ship design, calling where necessary for a changed approach by societies towards safety standards formulation.

Not only the adoption of higher power concentrations to achieve the faster sustainable speeds and scheduling dependability demanded by the industry, but also the tendency towards blunt bows, large forebody flare angles and finer underwater shapes, bear on the nature and effect of the structural loads imposed when moving through waves, in moderate as well as rough sea conditions. 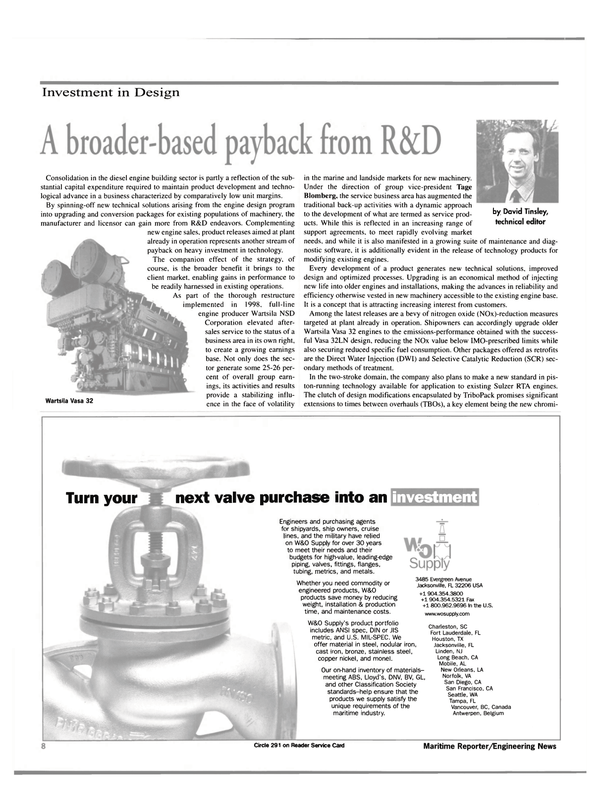 Read A broader-based payback from R&D in Pdf, Flash or Html5 edition of March 2000 Maritime Reporter