Washburn & Doughty Shipyard of East Boothbay, Maine is preparing to launch Tracy Moran, the fourth in a series of six Z-Drive Tugs under construction for the Moran Towing Corporation of Greenwich, Conn. Tracy Moran will join its sisterships in Norfolk, Va. where they are contracted by the Military Sealift Command for submarine and ship assist work.

The Moran contract is the largest multi-vessel contract ever awarded to Washburn & Doughty. In taking on the Moran contract, Washburn & Doughty had to decide how to make its small yard reach production levels on par with the country's larger yards. According to company president Bruce Doughty, much of the yard's success in maximizing production stems from the fact that the design was done in-house using AutoCAD.

"By using CAD we can make adjustments during both the planning phase and construction phase," said Doughty.

"In addition, it allows us to communicate information effectively with vendors and sub-contractors via e-mail." In order to meet Moran's schedule, Washburn & Doughty had to develop new planning schedules for both production and manning. "If we had decided to build all six vessels from the keel up. we would have been in big trouble," said Doughty. "We definitely took a more modular approach to construction during this project." As an example of this more modular approach. Doughty pointed out some of the wheelhouses were constructed and outfitted far from their respective vessels.

In keeping with the modular theme, Washburn & Doughty contracted out fabrication of some of the bulkier vessel pieces. "Sub-contracting out some strategic vessel parts, like the engine beds, provided enormous benefits for the yard," said Doughty. "By sub-contracting out the engine beds, we were able to lay the keel and the engine beds immediately after the launch of the previous boat. This allowed us to put more people to work sooner. It also kept floor space free for the projects that needed to be completed at the yard." Another key component to the Moran project has been the development of a larger and more efficient workforce.

Washburn & Doughty increased their production crew significantly during the project and promoted a number of senior production employees to leadership positions. Tracy Moran is scheduled for launch this month. Construction of the last two tugs and a 186 ft. (56.6 m) Dinner/ Casino Boat is simultaneously underway. 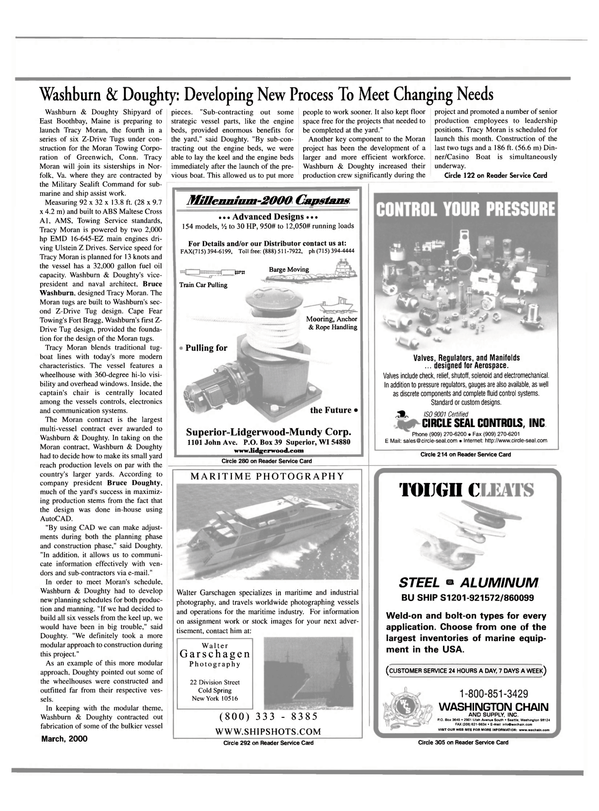