A backlash against older tankers and flags of convenience, triggered by the December sinking of the Erika off the coast of France, achieved a tangible first step last week with the signing of a Ship Safety Charter by oil majors and ship classification firms involved in the French petroleum shipping industry.

The parties signing the three-page document, including TotalFina, Elf Aquitaine, BP Amoco France, Royal Dutch/Shell France, Esso France, ship classification firm Bureau Veritas and petroleum industries federation UFIP, agreed not to use single-hulled ships after 2008 and, effective immediately, to only use ships over 15 years old if they have passed recent intensive inspections. Charterers will accept ships over 14 years old only if they have been classed by the same society for two years or more.

The charter does away with flags of convenience, calling for shippers and charterers to use only ships flagged by countries in the EU, EEC, or a state that effectively applies specific standards related to safety, inspection and training of crew.

Classification societies, according to the charter, must maintain and provide a technical history of each ship it classifies in the event of a transfer to another society.

The charter, developed in a roundtable discussion held by the French government on Feb. 10, follows nearly two months of widespread calls for tighter rules to prevent another Erika-like accident from happening.

The Erika, a 37,283-dwt, 25-year-old Maltese- flagged products tanker, broke in two and sank during a Dec. 12 storm, spilling about 15,000 tons of fuel oil, which began to wash up on France's Brittany coast on Christmas Eve, polluting 250 miles of beaches, killing or maiming 300,000 sea birds — dealing a harmful blow to the French fishing and tourism industries.

RINA, the Italian society that classed the Erika, reported on Feb. 9 that initial findings into the cause of the accident point to a small structural failure in hull structure. This was followed by a cracking that led to the hull's collapse. "RINA will continue investigations to determine the cause of the initial failure as well as the results of subsequent actions by the master owners and other parties involved," society officials said.

Though not one of the signers of the safety charter, RINA has called for improved exchanges of information between classification societies and has instituted a full audit of all similar ships in its fleet. The society also continues to cooperate with the French government's investigation of the accident and maintains that it acted correctly and followed all relevant standards and guidelines.

Oil giant TotalFina, which chartered Erika, has also refused to accept any responsibility for the sinking of the Erika. However, the company has donated about $125 million to the cleanup effort and, along with several other oil majors, instituted its own tighter chartering policies prior to the signing of the charter.

Although many industry players, including the CGT trade union, feel that the charter's safety proposals, to be debated at a March 28 Council of Ministers meeting in Belgium, are a good first step in the right direction, others insist that such Draconian regulations are unnecessary and won't help the problem.

The captain of the Erika has said that tight budgets mean that safety standards are often ignored. "There are certain things that nobody dares to say, but the job has changed a lot, everything is going too fast, everything is dominated by money," Karun Mathir, still under formal investigation for maritime pollution, said. He added that the Erika's 26- person crew was doing the work that used to require 60 crewmembers.

Stopover times at ports were thus shortened, meaning less time for paperwork, and a phasing out of radio officers led to lessened coordination with insurers, shipowners and shipping authorities, he said.

On the other hand, Lars Carlsson, president of Concordia Maritime, asserts that a series of simple measures could eradicate the problems that led to the Erika incident, but that shippers deserve stricter, "unpredictable and inefficient" regulations if they won't follow such steps. Carlsson has proposed measures including the boycotting of companies that are known to break or bend rules. Oil traders and tanker brokers have said that the outcry for tougher tanker restrictions might fade once the public outcry over the Erika dies down, and have warned that tightening of rules could result in a shortage of appropriate tonnage. Brokers say that nearly 20 percent, 340 ships, of the world fleet of 1,744 tankers between 10,000-50,000 dwt are 25 years of age or over. More than 50 ships still operating were built in the 1960s.

"(The oil companies) depend a lot on older ships, but if they were prepared to pay more for modern ships, it would encourage owners to build more," a broker said. 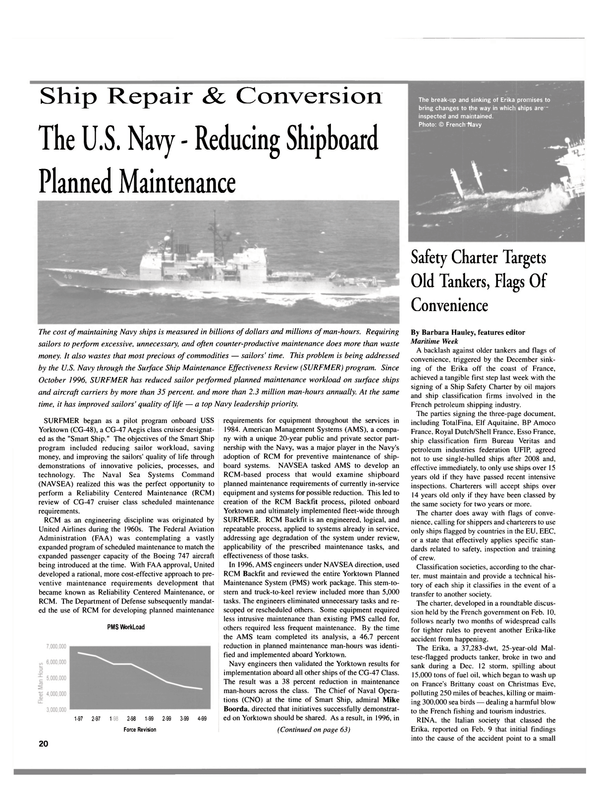