Electronic update service for digital charts equals a radical new service in the United States The entire suite of 1,000 official NOAA nautical charts has been available in digital raster form since 1995.

These high quality, full color, geo-referenced images of NOAA's paper charts are made for use in computer-based navigation systems and work with GPS or other electronic positioning systems.

They are produced jointly by NOAA and Maptech, Inc. under a cooperative research and development agreement (CRADA).

Mariners quickly adopted raster nautical charts. Their rapid adoption was aided by first-rate navigation software available from many companies at an affordable price. Today, the raster charts outsell NOAA's paper charts by eight to five. Each CD-ROM, containing about 55 charts, has grown to include the Coast Pilot, marine facilities, indexing and viewing software, and other facilities - all at no additional cost.

The final capability needed for raster charts is a practical means of applying the Notice to Mariners corrections that are issued weekly. With a reliable, officially approved update service, raster charts will be suitable for professional use and will meet the international standards for Electronic Chart Display and Information Systems (ECDIS).

The resulting digital files are used to make both paper and raster charts. Historically, new information was saved until about 50 critical changes had accrued and then the files would be updated and a new edition issued.

To support a weekly update service, NOAA remade its production system, processes, and procedures. More than 40,000 outstanding corrections were applied to eliminate the existing backlog of changes. This was no easy feat and took more than one year to accomplish.

Today, all 1,000 charts are continually updated for changes from the Coast Guard, NIMA, and the Canadian Hydro- graphic Service Notices to Mariners in the same week the Notices are issued.

These files are then available for printing new charts and for Maptech to make raster chart updates.

The Digital Patch Technology The corrected raster files are too large to be distributed as updates (about 100 megabytes per chart). Instead, NOAA and Maptech developed a special "patch" technology. In this method, a pixel-by-pixel comparison is made between the old raster chart file and the updated one. A difference file is made that contains exactly those pixels, which, if overlaid on the old raster chart, turn it into the new one.

Maptech makes this difference file, adds the geo-referencing, metadata, and information that allows an update patch to be exactly registered with the old raster file to which it will be applied.

The difference file is then compressed using a special algorithm developed by NOAA and Maptech to create a small (1 to 100 KB with 99 percent smaller than 10 KB) patch for each raster chart.

To update a raster chart, the old raster file is displayed from the CD-ROM and immediately "wiped-over" with the patch file. Where no pixels were different between the old raster chart and the new, the patch acts like it has transpar- ent pixels and unchanged pixels from the old chart show through.

This novel differencing technique can be used to create sequential, week-toweek patches, or to create cumulative patches that include all changes since a new chart edition. It can also be used to overlay other geo-referenced raster data on top of the chart.

The technology, production and distribution methods were jointly developed over the last two years. Maptech invested more than six staff years in technology development (exclusive of manufacturing, sales and distribution) and NOAA also invested heavily to produce a reliable updating infrastructure. Sea trials in 1999 have proven the method and added to its robustness.

The Raster Chart Updating Service The updating service became available in January 2000 as a subscription, consisting of a weekly e-mail containing a hot link to the update computer server.

When a mariner clicks on the hot link, it begins the transmission of the update patches to his computer. The transmission contains cumulative updates for all the charts on a CD-ROM. It takes 15 seconds to more than five minutes to download the file — depending on one's modem speed. When file reception is complete, a program on the mariner's computer unpacks the updates for immediate use, or copies charts from the CD-ROM, applies the patches, and then stores the updated charts on the hard drive.

At first, mariners will update the charts and store them on their hard drive. Then, as software developers modify their navigation packages, dynamic updating should be available.

With dynamic updating, the charts and patches remain separate and the patch is "wiped over" the chart in real-time. This allows mariners to see that the patch is applied and to see what has changed, an important capability for mariners who transit a waterway frequently. Dynamic patching is also the preferred method under the international standards for ECDIS where mariners are required not to alter the original data files. Either patching method will let the mariner toggle between the old chart and the new chart, or to view the patch by itself.

Maptech provides the update service as part of its CRADA partnership responsibilities. It comes packaged in a new, professional-level product. On each CD-ROM, mariners receive about 55 raster charts, the Coast Pilot, Light List, Tide Tables, Tidal Current Tables — where they exist — and update services for one year as a package deal.

Notice that the CD-ROM contains all of the items called for in the Coast Guard's charts and publications carriage regulations.

Official Status With the availability of the weekly update service, NOAA is permitting its logo to be used on the commercial raster chart product. Accompanying text explains that the raster charts (and updates) were produced under the authority of NOAA, the national hydrographic office for the United States. This status makes them suitable for meeting the international standards for ECDIS In addition, NOAA and the Coast Guard have been working closely during the development of the ECDIS standards.

Then, it is expected that the Coast Guard will amend the chart carriage regulations to permit the use of electronic charts and publications.

This U.S. raster chart update service is the first electronically delivered weekly service. Priced substantially below the cost of the few similar services available elsewhere in the world, it is a significant step in providing mariners a professional, modern navigation service in U.S.

waters. Future plans may include the availability of single-chart updates rather than an entire CD's worth, and the inclusion of weekly updates to the Coast Pilot, Light List, and tide and current tables, as NOAA is able to provide the data. High accuracy vector data (called electronic navigational charts, ENCs) will also become available, with weekly updating, for the most demanding navigation in restricted and congested waterways.

It is expected that these ENCs and updates will be added to the professional navigation product.

The preceding was co-authored by David B. Enabnit, Office of Coast Survey, NOAA; and Mark A. Jadkowski, Maptech, Inc. 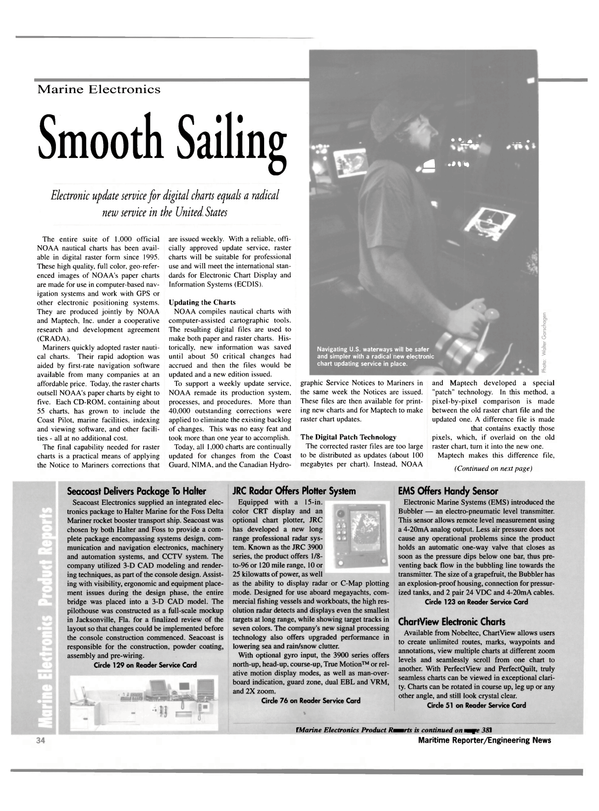