Theodore Tugboat, the star of a live-action a n i m a t e d c h i l d r e n ' s t e l e v i s i o n series for p r e - s c h o o l children, is going live at a shipyard in Canada. A lifesize replica of Theodore Tugboat — dubbed Theodore Too! — is currently under construction at Snyder's Shipyard near Lunenburg, Nova Scotia, an area renowned for turning out wooden boat legends. Designed by Fred Allen and naval Architect Marius Lengkeek, the new vessel is scheduled to be launched in the fall.

The show — which is hosted by former Mamas & the Papas' rock band frontman Denny Doherty — consists of a series of 12-minute segments and aims to deliver interesting and educational stories. Using Halifax Harbor as its model, set designer Fred Allen and creator Andrew Cochran have delivered a unique educational and maritime environment that features more than 40 floating models and more than 200 individual 3-D structures.

Powered by a 400-hp Caterpillar diesel engine, Theodore will be capable of an 8.5-knot speed. Constructed of a variety of woods, including spruce, oak, yellow birch, white pine and maple, the 65 ft. (19.8 m) boat will feature a molded fiberglass hat, face and smokestack, as well as eyes operational via a hydraulic mechanism.

Philip Snyder is president of Snyder Shipyard, and has worked there since 1966, serving as a master shipbuilder since 1972. He notes that the new ves- sel will be framed out with steamed frames, and plank on frames, which means it will be built in the traditional style. He said that one of the biggest challenges for the project to date was getting the timber, as the shape of the bow and stern demanded some very large wood. 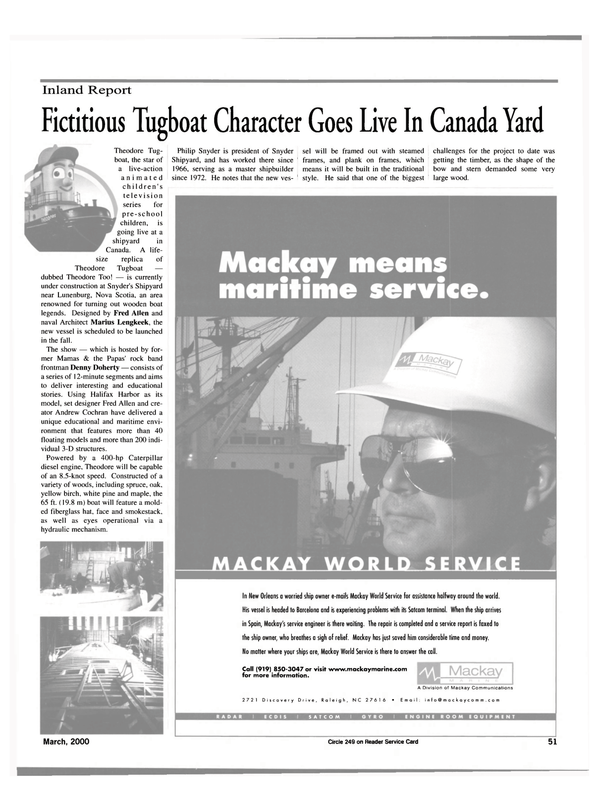