A summer day in July proved to be unfavorable for Color Line, whose passenger ferry, Prinsesse Ragnhild experienced a fire in its engine room en route from Kiel to Oslo.

The vessel's fire was apparently caused by a defective fuel pipe. The job of repairing the ship was granted to the German team of Blohm + Voss Repair GmbH, Hamburg, who assured Color Line with a quick turnaround, ensuring that the vessel was kept out of a service for a minimal amount of time, due to its tight cruising schedule. Subcontracted by Blohm + Voss was Turbotechnik Repairyard of Wilhelmshaven, who would perform fire damage repairs to the two Stork Werkspoor Diesel-built main engines, SWD 20 TM 410 (14,000-hp each). The vessel's starboard main engine and crankshaft engine had previously been renewed during scheduled repairs in Kiel during 1996. Work for the main engines' repair, included reconstruction, comprehensive repair or renewal of all damaged piping, control and pneumatic lines and equipment, as well as new alignment and re-choking, adjustment and final commissioning. The starboard main engine was examined at a greater length and dismantled, since it was the source of the fire, with the cylinder block being lifted up to car deck for thorough overhaul. Camshafts were removed for full inspection, and the crankshaft was brought ashore for dimensional deflection measurements. The bed plate and main bearing were controlled and measured. A temporary intermediate platform was constructed on staging above the main engines proceeding the installation of the major components, so that repairs could be expedited and other trades could continue work in the area. 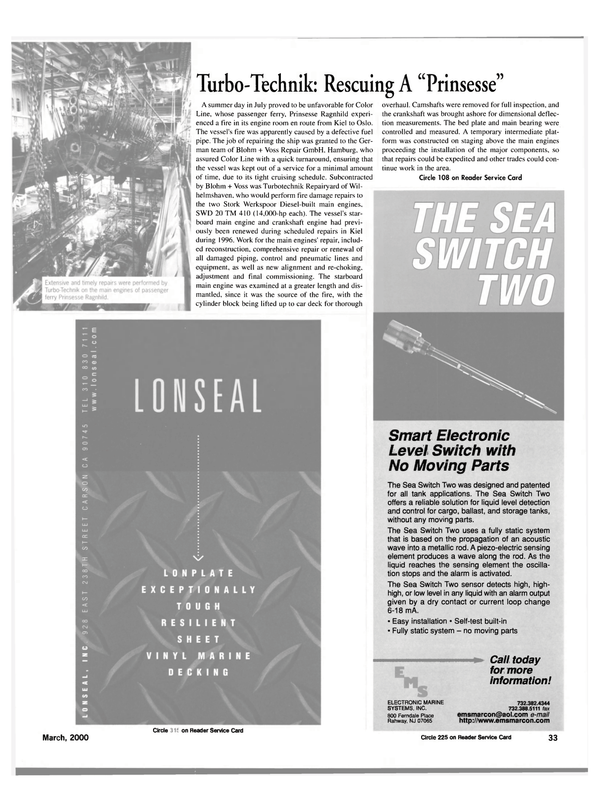