The recently completed M/S Boogabilla is classed by its builders and owners as the third generation of deepsea roll-on/roll-off vessels. The ship incorporates several new items for this type of vessel, such as a largebore, slow-speed diesel engine; three parallel trafficways, and a jumbo angled stern ramp.

The Boogabilla was designed and built by Mitsubishi Heavy Industries, Ltd. at its Koyagi Works of Nagasaki Shipyard for Scan Carriers, under contract by Transatlantic Reederi. The owner's unique ro/ro service requirements also were integrated into the design.

The vessel has four cargo decks consisting of tank top (deck 1), weather deck (deck 4) and two in-between decks. A hoistable cardeck in the cargo space below deck 3 and two tiers of hoistable and partly fixed cardecks at the forward part of deck 3 are also provided. A large quarter stern ramp, designed for a total load of 400 tons, is fitted at the stern end of deck 3, from which cargoes are loaded or unloaded and distributed to other decks through onboard rampways.

The machinery space and accommodations are located aft. Deck 4, below the accommodations, also is utilized as a cargo space. A funnel for the engine exhaust is located on the starboard side aft and is also used as the stern-ramp post. In order to obtain additional versatility, breakbulk refrigerated cargo spaces and tallow-oil tanks are provided in the aft part of deck 2 and the forward end of the cargo spaces respectively.

Cargo spaces, including the weather deck, are designed and equipped with a complete stowage pattern for containers. However, the capacity for carrying all kinds of general cargo was pronounced in the design criteria.

The pillars in the cargo space are located along the centerline at intervals of about 52 feet. The width of the double hull as well as the pillar intervals were decided from both a structural and a loading configuration point of view. Sunken-type sockets for container positioning cones are arranged on each deck for. standard modules, arranged to fix 10 units of 20-foot containers or five units of 40-foot containers athwartship or longitudinal.

Inside the cargo space, structural members are constructed so smooth and fair that vehicles can work safely without caution to protrusions.

The clear width of rampways was decided, taking the forklift with a 20-foot container into consideration. The width of ramps is as follows: deck 3 to deck 4—27 feet 3 inches, deck 3 to deck 2—38 feet 5 inches, and deck 2 to deck 1—25 feet. The average gradient of rampways is 1:8 to horizontal, but the details of the shape near each end were carefully designed to suit the type of vehicles used onboard.

Hull Construction Complete double-hull construction and a watertight bulkhead with very large watertight doors, located forward of midships, are provided. The double hull and the bulkhead with doors are vertically extended up to deck 4 from deck 1, although the freeboard deck is deck 3. In addition, the ramp cover on deck 3, which covers the inboard rampway between deck 3 and 2 is watertight. These features, even though they are not required by national and classification regulations, greatly improve the total ship's safety against penetration damage.

There is neither vertical cargo hatchways nor cargo gear for lift-on/lift-off service.

There is no cargo lift connecting each deck so that simple and quick cargo-handling work and less maintenance work can be expected.

Ventilation As is the case in ro/ro ships, an important item is the hold ventilation system. The ventilation of cargo holds is by many exhaust and supply fans located on deck 4, forward end and both starboard and port side, with ducts led inside the double hull construction.

Air in the hold flows in an athwartship direction during the voyage and in a longitudinal direction during loading and unloading, exhausting air through the opened stern door, the casing door on deck 4 and the inboard ramp covers. The ventilation was designed taking account of the gas content of CO and NOx below certain levels during an assumed cargo-handling condition. Air changes are: deck 1—30 times per hour, deck 2—25 times per hour and deck 3—20 times per hour. Additionally, an air-agitation system for preventing local concentration of exhaust gas is provided.

Generally, the environmental working conditions for the stevedores will be the same on all decks although there are a different number of air changes per hour. It is not sufficient to use the number of air changes as a design criteria, and consequently new criteria was developed and used for this vessel.

As to fire protection for cargo holds a smoke-detecting system, gas-detecting system and carbon-dioxide fire-extinguishing system are provided. The carbon dioxide system is of the low-pressure type and has a quantity corresponding to 45 percent of the largest compartment. Two-thirds of the gas capacity can be discharged within 10 minutes so as to meet IMCO's latest recommendations.

Hydrodynamic Design To fulfill the basic characteristics of the vessel, such as, geometrical configurations, deadweight, ship's speed, trim and stability and precautions for vibrations, ship's hull form was carefully developed on the basis of extensive builder's experience and investigations in this field.

As the ship's breadth and draft were given by the owner from the cargo handling and operation point of view, the ship's length was the only variable parameter in the optimization of the ship's dimension. After parametric studies of variation in ship's length, block coefficient and required power of the main engine, a ship's length of 688 feet 10 inches was selected.

So as to obtain an optimum hull form, five kinds of hull forms were tested. Starting with the original hull form designed on the basis of existing data, investigations were made into the effect of size and shape of bulbous bow, load waterline and frame line shapes.

The aft body lines were very carefully designed to minimize the propeller exciting forces with an improved wake distribution and frame lines as well as for obtaining a good performance of ship's speed. The difficulty of the design of the aft body consisted of resolving inconsistent demands.

Full breadth was required even at the aft end, and the draft was shallow compared with the breadth and the higher main engine power (larger propeller diameter).

Safety Measures Various safety measures have been adopted at the owner's request.

The rampway between deck 3 and deck 2 is covered by a watertight ramp cover, dividing the vessel into two compartments horizontally. The cover is designed to have watertightness with flooding above or below deck 3. Bilge suction lines from deck 3 are directly led to the engine room. These lines are separated from those from deck 1.

Eight sets of freeing ports with valves with a l^/a-inch diameter are arranged on the side shell just above deck 3. The valves can be remotely controlled from the deck control room with hydraulic devices. These freeing ports are provided for releasing the water directly overboard.

A watertight bulkhead with very large watertight doors is arranged between the decks from deck 1 to deck 4, on a vertical line, in order to divide the cargo space into two compartments veritcally. These doors were carefully designed and arranged not to interfere with the requirements for easy cargo handling.

Pipe passages on both sides on deck 1 are cross-connected at the forward end, which enables the list of the vessel to be smaller automatically when one side passage is damaged.

Double-hull construction was provided from deck 1 up to the weather deck, although deck 3 is designated as the freeboard deck. This construction makes the inner surface flat which enables rapid cargo handling and also makes the ship safer. The double hull between deck 3 and deck 4 contributes to the adjustment of the rolling period in ballast conditions by providing ballast-water tanks as well as increasing the residual buoyancy and residual BM when full vertical penetration should occur.

Each ventilating duct from the cargo spaces was fitted with a watertight damper on the top of the fan, which is remotely controlled from the deck control room. It prevents the air from flowing out freely and makes the flooding time longer when the cargo space is flooded, as well as acting as a fire damper.

All ventilating ducts for cargo spaces are independently led from the weather deck to each deck concerned and the ducts are led with triple hull construction below the freeboard deck to avoid direct flooding into the cargo spaces from a small damage to the outer shell.

Escape trunks are arranged from the cargo spaces to the weather deck through the double-hull construction and a watertight door is provided on every entrance to the trunk to avoid free connection between each deck space and also to avoid direct flooding into the cargo spaces by damage to the outer shell.

No side port opens directly into the engine room or cargo space below the freeboard deck. This concept avoids eventual flooding from the side port when it is opened or damaged.

Design Items One of the main points of the vessel is the installation of a slow speed diesel engine (Mitsubishi Sulzer 9RND90M rated at 30,150 hp maximum and 27,140 hp normal rating, 122 rpm and 118 rpm respectively) for propulsion.

Generally, the slow-speed diesel engine is advantageous due to the lessened fuel costs of heavy fuel oil, lower lubricating-oil consumption, and less maintenance due to the smaller number of cylinders. However, the engine height required for overhauling is a major disadvantage for ro/ro arrangements.

This problem was studied together with the machinery room arrangement and the inboard traffic arrangement. The machinery is arranged within the limited space incorporating the main engine, four diesel alternators, engine control room, work shops and many tanks as well as all the usual auxiliaries.

The exhaust trunking from the main engine and the auxiliaries are horizontally led to the starboard side and up to the offset funnel which is also used as the stern ramp post.

One side thruster is installed at the bow and one at the stern.

Three traffic lanes on the aft end of deck 3, consisting of an upward rampway to deck 4, a downward rampway to deck 2 and a horizontal way to deck 3 forward, are arranged in parallel just above the engine room. This arrangement was required from a cargo-handling point of view. The solution was attained by arranging the upward rampway at the ship's center so that the space below could be utilized to install the diesel engine.

A very big fixed quarter-type stern ramp with a separate weathertight stern door is the third special item. The access at the aft end of deck 3 is 86 feet 7 inches wide and 22 feet high. The height of deck 3 above the baseline at the stern, that is the "threshold height" is 47 feet 7 inches. The height of the kingpost for supporting the ramp is about 158 feet above the baseline.

In order to make this arrangement feasible, together with a wide stern access, the full breadth of the ship had to be extended to almost the aft end on deck 3.

In addition, ro/ro ships generally have a tendency to trim by the stern due to cargo and lightweight distribution, consequently the longitudinal center of buoyancy has to be located further aft than on ordinary cargo ships.

Mitsubishi Heavy Industries, Ltd., at the time of delivery of this special vessel, acknowledged that without the extensive cooperation rendered by the owner, regulatory bodies, subcontractors, and all peopie concerned with the initial design, detail design, research and experiments, approval of the design, procurements of many components, fabrication at site, tests and inspections, etc.

this project would not have been as successful as it has been. 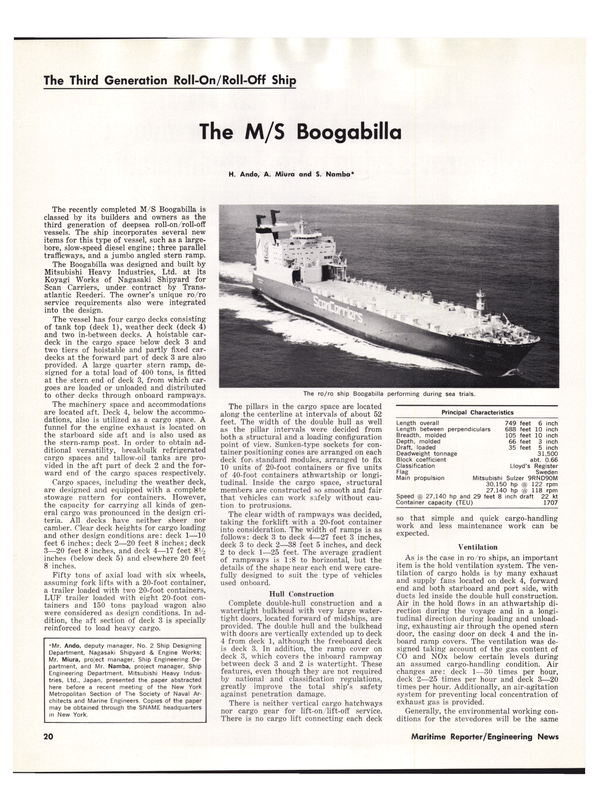