Global Transport Organisation, San Francisco, has formed a separate division for international tug and barge transports which will be headed by G.A. Watkins, according to a recent announcement by Leo L. Collar, chairman of GTO's Management Committee.

GTO already has established a reputation as a worldwide transporter of offshore drilling rigs, mammoth modules, dredging equipment and other heavy-lift and outsized cargoes.

"Though GTO pioneered many of the innovative techniques in ocean transport of heavy-lift cargo," said Mr. Collar, "we now find ourselves in a very competitive market for this type of work. Formation of the Ocean Transport Division enables GTO to focus its resources on aggressive pursuit of more business in this market, which in turn will allow our continued advancement in modern transportation." Mr. Watkins has been appointed manager of the division with responsibility for directing GTO's expanded marketing efforts and overall operations in international ocean transportation. He has been a long-time executive with Crowley M a r i t i m e Corporation, and was initially involved with the formation of GTO several years ago.

The Ocean Transport Division will maintain its own marketing staff in San Francisco and utilize operational and technical personnel, equipment, international offices and other resources of GTO and its member companies.

Member companies include Crowley Maritime International, a subsidiary of Crowley Maritime Corporation, San Francisco; Federal Pacific Limited, a part of Federal Commerce and Navigation, Montreal; and Genstar Overseas Limited, a division of Genstar Limited, Montreal. The collective resources of these companies make available over 200 oceangoing tugs, 400 barges, some 40 offices throughout the world, and a variety of skilled and experienced cargo transport personnel. 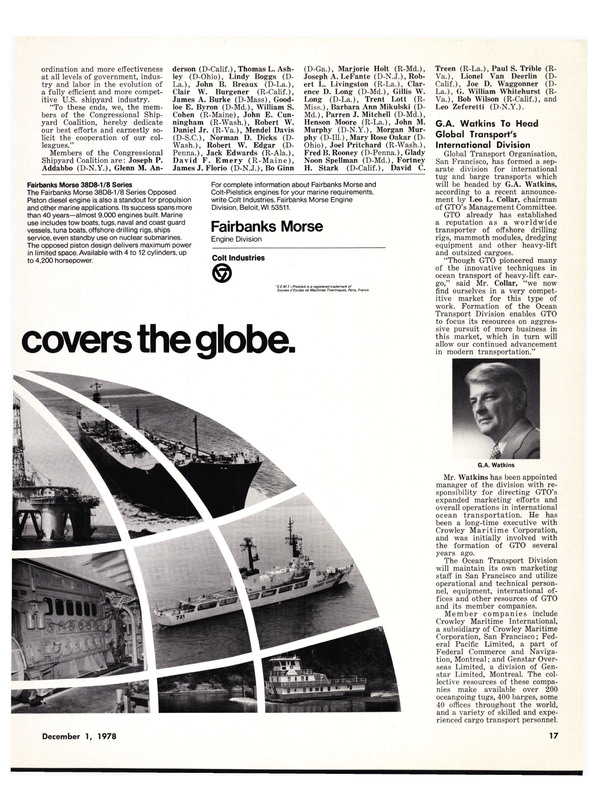