The October meeting of the Long Beach-Greater Los Angeles Section of The American Society of Naval Engineers was held in the Princess Room of the S/S Princess Louise Restaurant in San Pedro, Calif.

The members and guests enjoyed the fellowship of meeting and greeting old friends and new acquaintances during the social hour preceding the excellent dinner.

The fine food and the congenial atmosphere have become the hallmark of this regular meeting place. The business meeting was opened by Capt. J.E. Kaune, USN, Section chairman, who welcomed the attendance, and after the introductions and announcements, proceeded to give a thumbnail sketch of the highlights of the SURFLANT Symposium held in Norfolk, Va., on October 12 and 13.

Captain Kaune then turned the meeting over to John E. Marriner, Program chairman, who introduced the technical portion of the meeting as being a two-part presentation on the subject of corrosion protection and control, the first part being presented by Julian Porter, president of Flame- Spray, Inc. of San Diego, Calif., with the topic "Flame Spray Corrosion Protection." Mr. Porter described and explained the several methods employed in the thermal spray processes and numerous illustrations of the application in specific areas where corrosion had contributed to extremely high costs, and where other methods of corrosion protection had required extensive time and effort without complete effectiveness.

He continually stressed the tremendous costs attributable to the effects of corrosion in both the marine and industrial fields, and cited the flame spray method as being the most c o s t - e f f e c t i v e method of dealing with a wide variety of materials and compo- nents requiring protection from the hostile environment of the sea. He further cited several applications on valves and rotating machinery that have been effectively accomplished in local shipyards, and showed applications using both manually and mechanically operated spray guns.

Immediately following Mr. Porter's very interesting presentation, Capt. Robert Sulit, USNR, Scientific Advisor to Vice Admiral St. George, presented a slideillustrated talk on "Flame Spray Corrosion Control." His talk and the pictures described many practical applications aboard Naval vessels, and stated that a major problem is the corrosion of steam valves. The high temperature in the salty atmosphere accentuates the corrosion on the exposed surfaces of the valve body, trim and and the handwheels.

Captain Sulit pointed out that for the flame spray process to be successful, it must be performed under the strictest of quality assurance procedures. Since it is considered a critical process, extreme care must be exercised in the preparation of the surface to be coated, and the work be done in accordance with approved procedures by qualified personnel.

The metal spray is generally applied to about 3 to 4 mils thickness for corrosion protection, while the ceramic spray, which is known commercially by the trade name SermeTel, is generally applied about 1 mil thick to nonporous surfaces. The use of this process to create corrosionresistant surfaces on shipboard components is a relatively recent innovation and offers potentially large economies in this area.

Following the usual questionand- answer period at the conclusion of the two talks, each speaker was presented with a certificate of appreciation in recognition of the time and effort he had spent. 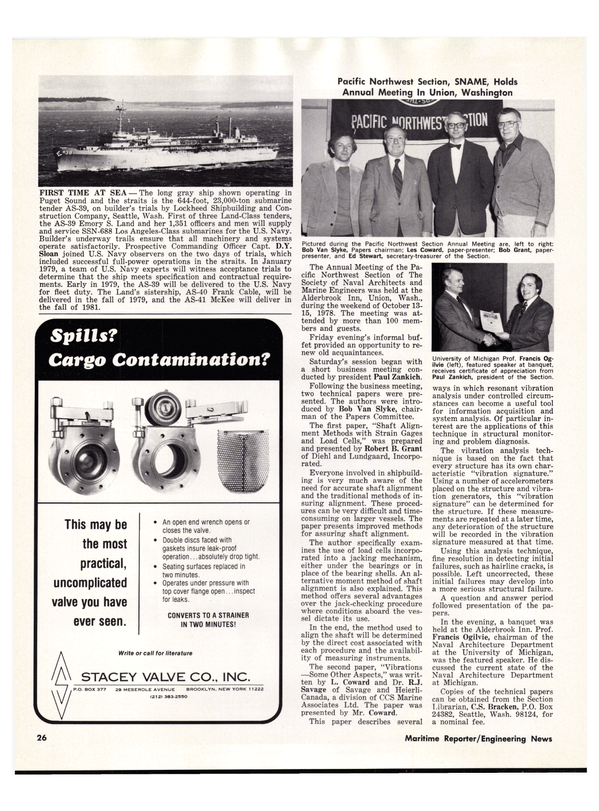