The Southern New England Section of the American Society of Naval Engineers, Groton, Conn., held its fall meeting at the Coast Guard Academy. The technical session of the meeting was a distinguished panel convened to discuss the topic "Southeastern Connecticut's Stake in the Development of Offshore Resources." The speakers included: Joseph A.Cope, manager of Policy Development and Economics of the Continental Oil Company; John Ritter, president of Hydrospace Systems Inc., based in New London, Conn. ; Christopher Roosevelt of the Oceanic Society, Stamford Marine Center, and R. Wicklund, Legislative Assistant for Ocean Affairs to Senator Lowell P. Weicker Jr.

Mr. Cope opened the discussion by explaining the impact of offshore resources reserves on New England's energy needs. He began by noting the heavy dependence of New England on oil, which provides approximately 80 percent of the area's energy needs compared to 50 percent nationally.

With 80 percent of Connecticut's oil imported, the state is vulnerable to interruptions and/or shortages; therefore, the region has a definite interest in the development of offshore oil resources.

George's Bank may contain up to one billion barrels of oil, and could supply perhaps 5 to 10 percent of the area's energy needs. He indicated that Connecticut was not in the most advantageous position for servicing Baltimore Canyon rigs, but it is in an excellent position to experience secondary benefits associated with the construction of supply ships and/or platforms.

Mr. Ritter followed by discussing how one of the technological skills of the area, submarine building, could be applied to offshore resources. Southeastern Connecticut has exceptional technical and operational skills and resources which can be readily adapted from their present military application to this commercial area. The development of offshore resources will result in heavy demands for the maintenance and repair of subsea installations.

A significant cost associated with these operations is the lost time associated with weather. Below a depth of 100 feet, the ocean is relatively calm, and activities can continue long after operations must cease on the surface. His company, Hydrospace Systems, Inc., is presently developing a 115-foot commercial submersible to fill this operational area.

Mr. Roosevelt, speaking as an environmentalist concerned about the development of the oceans, began with the premise that if there are environmental resources that are economically developable, they will be developed. He emphasized that the goal of the environmentalist is not to stop development, but to temper the undesirable effects. He expressed a concern that the risks associated with offshore development may not have been adequately considered.

Mr. Wicklund noted that our o f f s h o r e resources have much more to offer than just oil. Primary economic activities represented by all U.S.-controlled ocean resources was estimated at $7.5 billion in 1973. By 2000 it is estimated that this will increase to 40 billion 1973 dollars. These resources include minerals, living resources, and non-extractable resources such as energy. He noted that the marine environment is extremely fragile, and the Federal Government's role is to assure that development and utilization of ocean resources will contribute to living standards while still protecting the environment.

He noted that during the next few years, Congress and the Administration will have to address several issues of direct importance to southeastern Connecticut Connecticut and offshore resource development.

The technical session was an enlightening and interesting conclusion to an enjoyable meeting, which began with cocktails and a delicious prime rib dinner at the Academy Officer's Club. 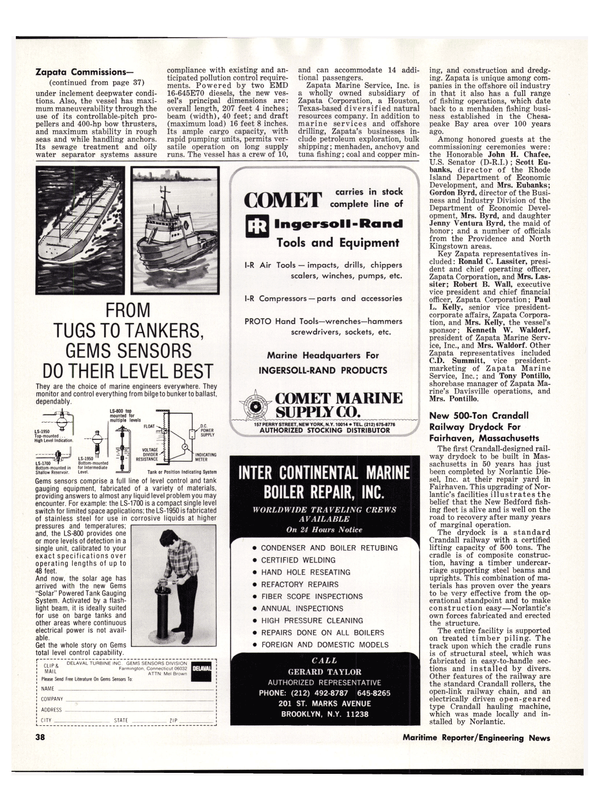