Over the next two years the U.S.

Spending Is Up For New Technology Navy R&D spending has grown impressively over the past 10 years.

Program Structure There are more than 270 Navy R&D programs—grouped according to stage of development: • 6.1 and 6.2 programs involve research and exploratory development; • 6.3 programs deal with advanced development; • 6.4 programs focus on system and component engineering.

Projects usually enter the system at the 6.1 or 6.2 level, transition to 6.3 when found feasible and move to 6.4 engineering as the final R&D stage. Transition into the procurement budget (SCN, WPN or OPN) follows successful test and demonstration.

• Boeing's involvement in the Sea Lance stand-off weapon can be traced back many years to its role in early exploratory research.

• Martin Marietta's development role in vertical launch system design led to its current position as one of two VLS suppliers.

What distinguishes these firms is their use of the Navy funded R&D to: (1) establish initial position; (2) widen and deepen technical development; (3) evolve into a key developer role; and (4) transition into full production as sole source or lead manufacturer.

Opportunities exist for both large and small firms to employ similar strategy for future business development— using Navy R&D as the vehicle. This strategy entails: (1) developing an understanding of future R&D programs; (2) matching the firm's capabilities with these programs; (3) measuring the competition; (4) shortlisting programs and areas of interest; and (5) formulating and implementing a plan of action for initial entry and growth.

To illustrate the nature and extent of opportunities in Navy technology, one area—underwater sound surveillance systems—is described as detailed from an IMA Report.

Underwater Sound Surveillance Systems The concept of planting listening devices on the ocean floor dates from WWII. After the war, the Navy began development of deep ocean arrays of hydrophones designed to listen for submarines. Since then, a number of sound surveillance system (SOSUS) arrays have been placed in position off the U.S. coast and in overseas locations.

The IUSS program (PE 24311) is designed to improve underwater surveillance systems and hardware.

Future Direction Major IUSS milestones include sea trials in October 1989 and system EDM specification in September 1990. DNSARC IIA for the FDS was scheduled in May 1988. Prototype production is planned to start in July 1989. Final design specifications are to be completed by April 1990. Procurement plans call for 7,150 NM cable, 200 clusters, 205 multiplexers/repeaters and 339 repeaters by 1992.

Comments and Issues Advances in quieting technology have greatly reduced the effectiveness of on-board listening devices.

Offboard ASW sensors are a high priority element in the Navy's future ASW strategy. Development of the IUSS will expand on existing SOSUS capability. In the longer term, the Navy hopes to develop and deploy the FDS and plans to spend almost $700 million on FDS RDT&E through program completion.

A five-year funding profile from FY 1985 through 1989 is provided for each program. Issues affecting future spending are discussed.

These contracts are arranged in alphabetical order according to contractor. The period covered extends from January 1984 through December 1987.

Organization charts and names of key personnel in 13 commands or laboratories involved in naval technology development are provided.

The 220-page report is available for $550. It can be obtained by contacting: International Maritime Associates, Inc., 835 New Hampshire Avenue, N.W., Washington, D.C.

Telephone orders will be accepted. 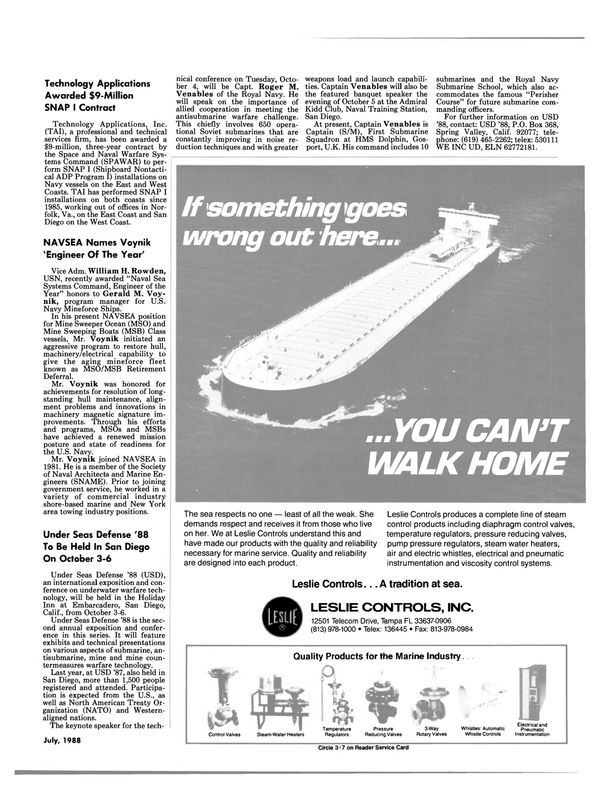