MMA's president, Larry Holley of Warren Pumps, Inc., opened the meeting, explaining that the location was chosen to bring the forum close to the operating forces and promote a dialogue on current critical issues facing manufacturers and the users of their products.

More than 100 representatives of the marine machinery industry and the Navy attended. Industry was represented by 36 machinery and equipment manufacturing companies.

Washington lawyer Jack Janet a t o s of Baker & McKenzie, MMA's founding president, gave the keynote address. He reported that the Commission on Merchant Marine and Defense has heard and acted on MMA's view that the diversion of spare parts and repair services to replicators is hurting the nation's ability to maintain an in- dustrial base to produce new equipment.

Mr. Janetatos stated that the SSN-21 program, in asking for Level 3 technical data, was buying more data than it could ever use or manage.

This, coupled with the demand for unlimited rights in data, was wasteful and contrary to the expressed intent of Congress.

Gordon Flynn, president of Hardie-Tynes, discussed machinery repair from the viewpoint of the manufacturer. He emphasized the importance of competence, knowledge, and quality control in overhauling machinery. Mr. Flynn was strongly in favor of the growing concept of a rotating pool of high population equipment to cut turnaround time.

Capt. Mort Kenyon, Combat Systems Maintenance Officer at SURFLANT, provided an inside look at how the Master Ordnance Repair system worked. Captain Kenyon detailed the manner in which quality is ensured in this program where 85 percent of the work is done in the private sector.

Rear Adm. David Donohue, Fleet Maintenance Officer at CINCLANTFLT, gave a luncheon speech on the diminishing budget available to the Navy in general and to the ship maintenance in the Atlantic Fleet in particular.

Admiral Donohue emphasized that quality parts and repair services are essential to the fleet, and he challenged the manufacturers to lower prices in the face of the budget reductions. He closed with a call for greater efficiency and quality on the part of the industry.

Cameron Blandford of Newport News Shipbuilding and Drydock Co., who testified before the Commission on Merchant Marine and Defense at the same session as the MMA delegation, expressed agreement with the Commission's desire to revitalize the merchant marine and was, in general, pleased with the body recommendations in their most recent report.

The final speaker was Capt. Alan Johnson, Assistant Chief of Staff, Ship Materiel, Commander Naval Air Force, U.S. Atlantic Fleet, who explained how AIRLANT is coping with a decreasing maintenance budget and the problems caused by heavy operating schedules and the homeporting of ships at a distance from repair facilities. He quoted from MMA's testimony to the Merchant Marine Commission in agreeing with the critical need for quality in repairs and parts. Captain Johnson closed by urging a plan for AIRLANT's engineers to work directly with MMA representatives to improve quality. 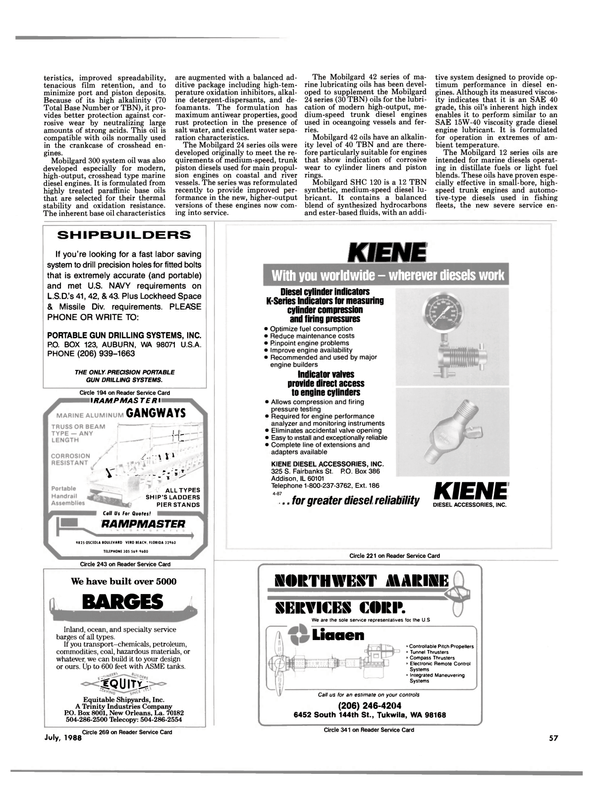