The Trinity Marine Group has been awarded an approximate $13- million contract for the construction of five workboats for the Jordan Ports Corporation of the Hashemite Kingdom of Jordan.

The docking tugs will work in the Gulf of Aqaba, helping to maneuver ships to anchorage and to and from piers. They will each be 106 feet 6 inches in length, with a 34-foot molded breadth, and 16-foot molded depth.

Each of the tugs will be powered by two General Motors EMD-8- 645F7BA engines developing a total of 3,200 bhp. They will be equipped with controllable pitch propellers inside steerable Kort-type nozzles.

The tugs will also be equipped with four 1,600-gpm water/foam fire monitors and each boat will have accommodations for a crew of eight.

The two 60-foot towboats will move barges and lighters to and from ships at anchorage, and tow barge-mounted derricks for loading and unloading ships and lighters.

The towboats will also assist in docking ships, but will not be equipped with towing knees common to American towboats.

Each of the towboats will have a beam of 22 feet and a depth of 8.5 feet. They will be powered by two Cummins KT19-M diesel engines developing a total of 850 bhp.

The pilot boat will have a 15-foot beam and a 7-foot molded depth.

She will transport ships' pilots to the Gulf of Aqaba.

The pilot boat will have a lightweight steel hull and an aluminum superstructure. She will be powered by two Detroit Diesel 8V71T diesel engines developing 349 hp each. 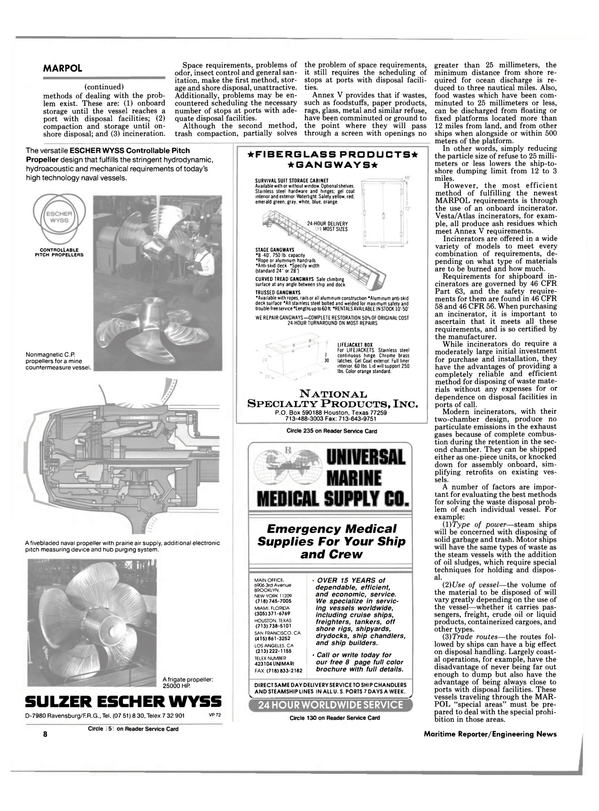