In shipbuilding, offshore and marine technology, harbor and waterway construction, new technologies and new products are causing a revolution that will decide who will remain competitive now and in the future.

The 13th Ship, Machinery & Marine Technology International Trade Fair, SMM'88, will address this marine evolution when it opens September 27 at the Congress Centrum Hamburg, Hamburg, West Germany. With some 30,000 trade visitors expected to attend, SMM '88 will be one of the largest international events of its kind. The event is committed to bringing together top-level representatives of the companies that provide new technologies, products and services to the marine industry and the companies that utilize them. For five days, some 500 direct exhibitors from around the world will fill 12 exhibition halls with state-of-the-art products and services. The main exhibition sections are shipbuilding, oceangoing ships' propulsion systems, marine technology equipment, rudder and maneuvering systems and control, and measuring and regulating technology.

However, SMM '88 will feature more than just new products and services. The event will present the full scope of the developments in the marine industry, including new solutions and technologies that represent potential progress and growth for the entire industry. All in all, SMM '88 will provide a comprehensive overview of the entire international market in the areas of shipbuilding, marine and offshore technology and port and waterway construction.

Some of the topics covered in these categories will include: marine architecture, shipyard equipment, ship machinery and equipment, safety on board, marine technology, development and consultancy services, harbor construction and equipment, and information and communication systems.

The International Shipping and Marine Technology Market exhibition has a successful record as an international meeting place for key decision-making industry representatives.

Over 40 % of the attendees of SMM '86 came from abroad, indicating that the show has a high international profile. This year's show is expected to draw visitors from such countries as China, Korea, Taiwan, Singapore, Venezuela, the Soviet Union, the Netherlands, Norway, Finland, Poland, Brazil, Egypt, Bulgaria, Greece and the United States.

According to Exhibition Survey SMM '86, about 31% of all the exhibitors made sales totaling in excess of a million deutsche marks at the event.

In addition to the various areas covered by SMM '88, this year the international port fair PORTEX '88, which will feature port and harbor equipment products and services, has been integrated into the event.

Marine Technology Marine technology is one key theme of SMM '88. The marine offshore technology exhibits will be concentrated for the first time in one building—Hall 1, part of the complex of new halls in Hamburg.

Marine technology is a field covering all the technical activities concerned with research into and the use and protection of the seas.

The importance of the presentation of West German R&D findings in marine technology is underlined by the demands of internationally renowned scientists such as Prof.

Konstantin Kokkinowrachos, chairman of the German Committee for Marine Research and Marine Technology, for the intensification of national and international cooperation in the field, including that between universities and industry.

A further keynote theme at SMM '88 will be information and exhibits concerned with scientific and technical cooperation with developing and newly industrializing countries aimed at an improved exploitation of the seas, i.e.—fishing and aquacultures or harvesting the proteinrich krills in the Antarctic.

The committee led by Professor Kokkinowrachos is also the organizer behind an SMM '88 congress entitled "Europe and the Sea—Marine Sciences and Technology in the 1990s." Whereas seaweed and eelgrass will only play a marginal role in the generation of power in the years to come, innovations from the field of offshore technology will increase in significance for other maritime areas. In this respect, particular attention should be paid to the research work being undertaken at Hamburg-based Harburg Technical University, which is one of the exhibitors at SMM '88. Harburg University is playing an important role in furthering the understanding of the complicated interrelationships between substances and of mechanical stress and the chemical effects of exposure to seawater.

In addition, the International Congress on Ship's Technology (ICST '88) will be held in conjunction with SMM '88 on September 28. The theme of ICST '88 will be the "Contribution on the Economy and Safety in Ship Technology." Highlighting the congress will be a presentation by Dr. G.A. Lustgarten and K. Aeberli, Sulzer Brothers AG, Winterthur, on "Two- Stroke Diesel Engines for Cost- Effective Ship's Operation." Among the exhibitors at SMM '88 will be Hamworthy Engineering, which will be occupying Stand 2052 in Hall 2. The company's Pumps and Compressors subsidiary will display its new ranges of air-cooled compressors and centrifugal pumps.

Of particular interest to diesel engine users will be the company's patented Turnomat valve rotator, which ensures a definite valve rotation speed.

The latest developments in the Evac Vacuum Toilet System will be demonstrated at the stand of Triton Belco AG, the West German distributors for OY Wartsila AB Evac of Finland. Several working units will be on display, including the popular "silent" toilet, a toilet with Evac's new electronic flushing control and the company's newest addition, the "toilet of the future." At the stand of their West German subsidiary, ASEA-Hagglunds GmbH, Hagglunds Marine & Offshore AB will present their full range of deck crane technology.

Low-profile versions of Hagglunds G2 and L2 type cranes will be on display, as well as the company's "hinged cab" wire-luffing cranes.

An adajecent stand will display the hydraulic products of the Hagglunds Denison group of companies.

Liebherr-Werk Nenzing, another marine lifting equipment and crane specialist, will also be exhibiting at SMM '88. The company will present its production line of offshore cranes, including the North Seaproven BOS type and its series of ram luffing offshore cranes, RL type, with their low overall height and horizontal boom storage features. 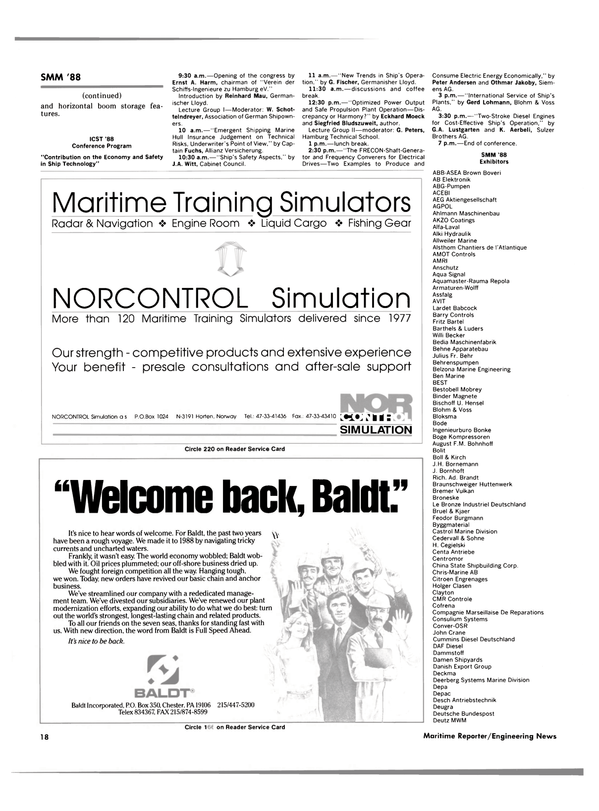